Mark E Smith, who died on January 24th at the age of 60, was the singer and primer mover behind The Fall, one of the most enduring and prolific groups to emerge from the British punk explosion in the mid 1970s. Smith's death came as a jolt, but not quite a shock, as it had been clear for some months that he was in very poor health. Of course I had hoped that he would make a recovery and resume touring, but the omens were not good.

The Fall's music had been an all-consuming obsession of mine for nearly thirty years. I felt that I came to them rather late, for they had already been active for a decade when I bought my first Fall record, The Frenz Experiment, which I obtained from the bargain bin in a branch of John Menzies, in St Andrews, Scotland, in 1989. 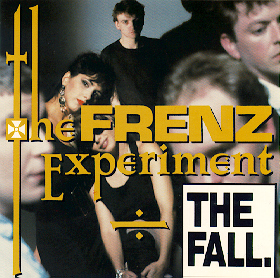 I think it was always my favorite Fall record, or certainly a consistent fixture in the top three. (The other record I bought that day, incidentally, and which I also still own, was a copy of OMD's The Pacific Age).

In hindsight 1989 was a good time to get into The Fall as they were both visible and prolific, attaining a degree of mainstream success that, while not quite making them a household name, was still a relative high-water mark in their career. They were on the radio quite a lot; their posters were in student bedrooms, they were mentioned in pop-culture in things like Viz, Irvine Welsh and Martin Millar books. John Peel was still a central figure in UK radio and the Fall were never far from doing another session. They were on a major label (not with The Frenz Experiment, but with Extricate, which came out the same year, on Fontana) and this flirtation with conventional success would continue for a few more years, with perhaps the last gasp being 1993's Infotainment Scan, which got quite high in the album charts. In 1991, a song of theirs was even used in the soundtrack to the film Silence of the Lambs - yet mixed so low in the scene that even diehard Fall fans might have missed it.

The Fall - and Smith - were a unique and prickly proposition. Their early records are the only ones that fit into any preconceived musical categories, being steeped in garage/punk/rockabilly. Within a few years, though, they were off the map - any map. There was a deep weirdness to both the music and Smith's worldview that was barely tempered by the LA pop-rock influence brought to the band by Brix E Smith, whom Smith had married. The music took repetition to unheard of extremes. Smith's lyrics, delivered with the hectoring intensity of someone trying to control a village fete through a malfunctioning megaphone, veered from sci-fi to psychedelia, taking in Philip K Dick, drugs, MR James, drugs, time-travel, ghosts, drugs, psychic phenomena, the North, while at the same time railing against (it seemed) all other groups, all other musical personalities, all other forms of music, all other human beings, barring those born within a very specific part of Salford/Manchester. Over the years Smith's antipathy to the "south" and "southerners" would encroach further and further north, until even "South Manchester" was too far south for him. He had little time for fans in the conventional sense of the word, and even less interest in his own recordings.

I saw them on about half a dozen occasions over twenty years, with all but one of those concerts taking place in the Netherlands. I never met Smith, although I dreamt about him with some regularity. The closest I got was the occasion when I gave a lift to Neville Wilding, a guitarist who played with the band for a short period around the end of the century. Due to some mix-up or disagreement, Nev had been required to make his own way across the English Channel and needed ferrying from the Hook of Holland to Nijmegen. A friend and I picked him up in my 1989 BMW and drove him to the venue in time for the sound check. Nev insisted we stop at a petrol station and buy quite a large amount of beer, so we did. On the drive, Nev sat in the backseat cracking open one tinny after the next. Later, I carried his guitar inside for him. I didn't have a ticket for that performance, but I did catch them a night or two later. Oddly, Neville was walking out just as we arrived at the venue. He gave us a cheery wave as he passed - turned out he'd been sacked, just one of the sixty-odd members of the group to pass through  the ever-revolving turnstile of The Fall. He did return to the band for a period, I believe.

I had one other, minor link to the band's music. In 1994, at the dawn of the World Wide Web, I signed up for a mailing list dedicated to The Fall. It was a way for Fall fans to share their enthusiasm for the band, trade stories, discuss gigs and hard-to-find releases, and I found it invaluable. In fact, I'm still on it, nearly a quarter of a century later. Early on, though, one of the main "jobs" for people on the list was to transcribe lyrics, so that we could all pick over them and puzzle out their meaning. Quite a lot of the catalogue hadn't been done, so I volunteered to transcribe "Athlete Cured", one of the tracks off The Frenz Experiment. My transcription eventually entered the "lyrics parade" and as far as I'm aware any transcription of Athlete Cured on the internet now probably derives from my initial version, which was done by painstakingly lifting and lowering the needle on my vinyl copy.

I bought every Fall album, of which there were many, and there is still no group or musician whose output comes close to rivalling them, in terms of the number of official and semi-official releases. Neil Young would be the next, but I don't think even Neil touches The Fall - although of course we can hope for more Neil Young recordings, and there will be nothing new from Mark E Smith.

Smith was not necessarily the most likable person in music, but he was admirable, and single-minded, and possessed of tremendous energy and imagination, and for those of who tuned into the fringes of his deeply weird mind, nothing would ever be the same again. Thank you for the music, Mark.