Title says it all really. There are at least six eggs in this nestbox. If all goes to plan they should start hatching somewhere around May 14th. 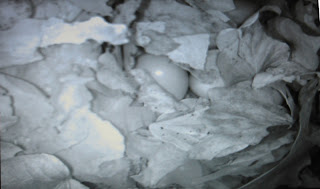 It took me a little while to get what Iain M Banks was up to. I had been only distantly aware of his books before the publication of his first SF title, Consider Phlebas, in 1987. On the strength of an interview in Interzone, and a short story set in the same universe, I bought the hardcover of Phlebas when it came out. No small thing, that, since I was still an undergraduate student and hardcover purchases were not something to be taken lightly. However, Phlebas seemed likely to be the kind of thing I would enjoy. It was a chunky book with a spaceship on the cover. I was excited by the idea that this literary writer was taking on not just science fiction but full-on, galaxy-spanning space opera. How could it not be fantastic?

It turned out, though, that I couldn't really get on with Consider Phlebas. I read it but found it not particularly to my liking. It was big and colourful and noisy, but it didn't - to my eyes - feel as modern or disruptive or radical as I'd hoped. Perhaps I was hoping for something more closely aligned with the prevailing orthodoxies of contemporary SF - this was the tail-end of cyberpunk, after all. Phlebas felt to me to be looking back to an older tradition. The furniture felt second-hand, even if it was sometimes used in clever ways. There was a great deal of scientifically improbable stuff like force fields, hyperdrives, antigrav generators and so on. The book veered sharply between manic ultraviolance and knockabout humour. It did have, I had to admit, an amazingly tense conclusion in the bowels of an alien planet, even if that conclusion was drawn out over many chapters. On the whole, though, I found more to be annoyed by than to like. Why was the book set in the past? The presumption of a humanoid civilisation already out there now seemed to edge perilously close to Von Daniken nonsense of ancient aliens.

So, I didn't get on with Phlebas. But a year or two later I moved to Scotland and at the insistence of a friend I was introduced to Banks' earlier novels. I was loaned a copy of The Wasp Factory and found it remarkable. I went out and bought Walking on Glass and The Bridge. The Bridge struck me as absolutely amazing - even now, large parts of it haunt my imagination. Here was a different Banks - concise, formally inventive, fascinated by structure and narrative resonance. I became a totally committed fan of Iain Banks whoile remaining skeptical about the SF output of Iain M Banks. I did not read The Player of Games and have in fact still not read it.

But when Use of Weapons came out in 1990, my friend had acquired a copy of it and passed it on to me to read. I approached it with a distinct lack of enthusiasm, especially as it was yet another "Culture" novel. When was Banks going to give up on this nonsense, I wondered?

The thing was, though, that Use of Weapons turned out to be rather brilliant. It felt tighter than Phlebas, more economically told, and yet at the same time it seemed to contain much more. The playful approach to narrative and structure that I'd enjoyed in the non-SF books was here as well. The inventiveness, ranging from the gruesome to the delightful (I love the entombed battleship) was a thing of wonder. The book became one of my favorite recent SF novels and its influence on my second novel, Chasm City, is not something there would be much point in denying.

So there it was - I'd become a fan not just of Iain Banks, but Iain M Banks as well. And from that point on I tried to buy all his novels in hardcover when they came out. I continued to be staggered by his range and adventurousness, and when he moved away from the Culture in Against a Dark Background and Feersome Endjinn, I found myself enjoying those new universes as well. The Banksian universals were always present and correct. It seemed pretty clear to me that we were very, very lucky to have a writer of Banks' stature mixing it up in SF.

In 1996 I was at a bit of a crossroads. I'd  been working for two years as a postdoctoral researcher at the University of Utrecht in the Netherlands, but that stint was coming to an end and there was no realistic prospect of continued employment in Utrecht. I had already completed a three year fellowship at the European Space Agency and there were no obvious openings back there either. So with distinctly mixed feelings I realised that I would probably have to begin to looking for employment outside of the Netherlands. This was not easy because my partner (now my wife) had a permanent job in the country and in any case I felt I had invested part of my life in living abroad. I did not particularly want to scuttle back to the UK. It would have felt like an admission of failure.

Nonetheless, a job did come up at the University of Leicester and I applied for an interview. Leicester was the home of UK X-ray astronomy and this was an area where much of my recent research had taken place. I had not visited Leicester before although I had friends in the town so moving there would not be too much of a shock. I was flown in for the interview and did not perform well. I think, in hindsight, it must have been pretty obvious to all concerned that I was not all that enthusiastic about getting the job, so I must have come across as a very ambivalent candidate. 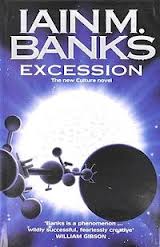 After the interview, for some reason, I had to fly out to Luton Airport to get back to the UK. It wasn't the airport I'd flown into. A taxi was provided for the long drive to the airport and I got there with plenty of time ahead of me before the flight. I felt deflated. I knew I hadn't shone in the interview, but the worst part was that I was sure it was my own misgivings holding me back. Why had I even bothered applying in the first place? It had only wasted someone else's time and money. I called my partner from a payphone (remember those?) and told her how things had gone. I hadn't really achieved anything because I was still going to be jobless at the end of 1996 and sooner or later I was going to have to face up to the hard likelihood that I would need to look for work outside of the Netherlands.

Later, I wandered over to the bookshop in the international departure lounge. Being a Banks fan I'd been aware that a new Culture novel was immiment but it was still a pleasant surprise to see copies of Excession on sale. Needing to lift my spirits, I bought one of the hardcovers. Despite my earlier reservations about Phleblas, I'd come to enjoy the Culture and I was excited to see what Banks did with it on his return. The book had a very good design.

I could be doing what Banks was doing in this book. Writing SF. And giving every impression of this being the single coolest, adventurous, most amazingly brilliant intellectually stimulating thing you could ever imagine doing. I was already publishing short fiction at this point - had, in fact, been doing so for six years - and I had a semi-finished SF novel lying around on computer files which I didn't know what to do with (something called Revelation Space). Here though, in the grand surroundings of the international departure lounge of Luton Airport, it all became magnificently, bracingly clear. I had to become an SF novelist. This was imperative. Nothing else would do it for me. The opening chapters of Excession had blown away all uncertainty. My partner had already told me that we could get by on her salary if I wanted to try writing full time, so what was I waiting for? Why had there ever been any doubt? I saw, suddenly, that I would much rather be unemployed and happy in the Netherlands than employed and unhappy back in the UK. The wonder was that this had not been obvious to me until that moment. And why had it taken the opening chapters of Excession to open my eyes?

I returned to the Netherlands. The day after, I drafted an email and withdrew my application for the Leicester position. I continued to work out the remainder of my postdoctoral contract. As it happened, though, an opportunity for employment did eventually open up in the Netherlands. I saw an advert for a small scientific consultancy firm based in Haarlem who were looking for a space scientist. I applied for more information and learned - to my immense surprise - that the firm was being set up by an old friend of mine, a fellow ex-patriot Welshman who I had known during my time at ESA. And so I ended up working for a Dutch-based scientific consultancy firm, managed by a Welshman, registered in the name of his wife, a fluent-Dutch speaking British ex-patriot dentist (who also became my actual dentist). It turned out to be a few months before the firm could take me and (as it transpired) contract me back to working at ESA but that window of unemployment turned out to be exactly what I needed to knock Revelation Space into shape and finally submit it. It went off to a publisher early in 1997.

The moral of this, if there is one, is that major life decisions can be swayed by the strangest and most unexpected of things. And in my case it was a chance encounter with a new hardcover of Excession that showed me where my priorities ought to lie.

And for that, Iain Banks, you have my immense gratitude.