The last for a while, this, but here's a brand new one, and for once I will be giving it away. This picture was done for Justin, one of the winners of the Strange Horizons prize draw. I'd offered to illustrate a scene from one of my books but Justin was good enough to let me do whatever I liked - although doubtless you could find a scene somewhere that more or less matches this picture, if you looked long enough (I mean, spaceship, gloomy planet - how hard can it be?)

Acrylic and airbrush, A3 size. I had a blast doing this and enjoyed working with a more restrained palette than usual. 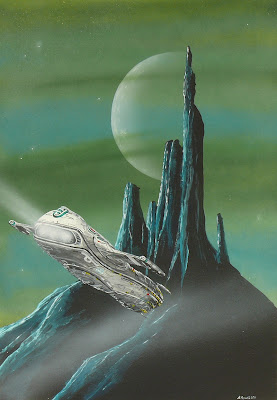 My wife found this one - it's mid 90s, acrylic and airbrush. No, I don't know which way up it's meant to be. I've uploaded a few other images to the website in the last week; more on the way. 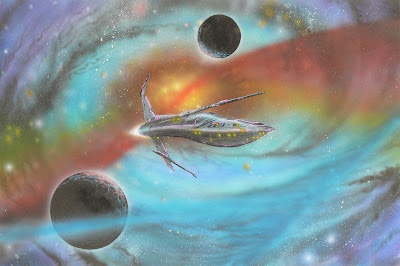 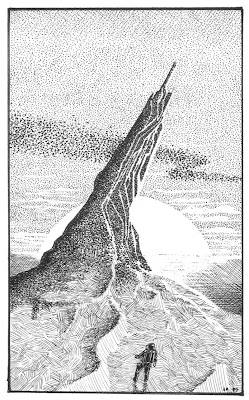 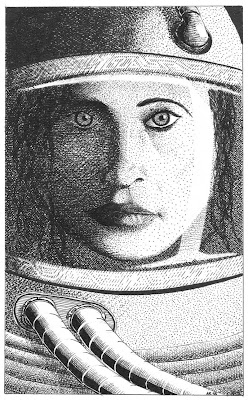 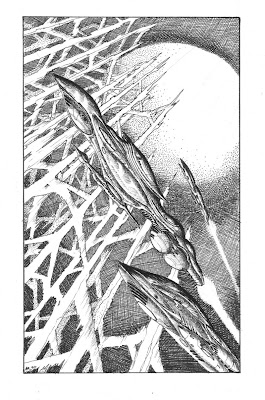 A little while ago I did this sketch for a correspondent who was interested in building a scale model (well, I hope it was a scale model) of the Nostalgia for Infinity. To my surprise (and delight) there are already quite a few sketches and models of lighthuggers out there on the web - some of them very close to my mental image. 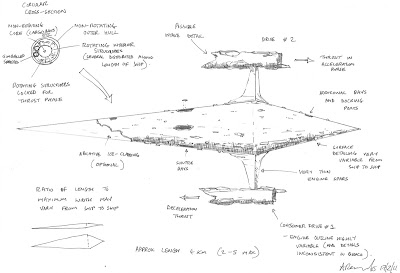 You can view the image at full size by clicking on the version at my website. I couldn't find a way to link to a bigger one from here.


I semi-pinched the name "lighthugger" from Ian Watson and Michael Bishop, by the way. Their excellent first contact novel "Under Heaven's Bridge" has relativistic ships called lightskimmers. And look - it's available to download: 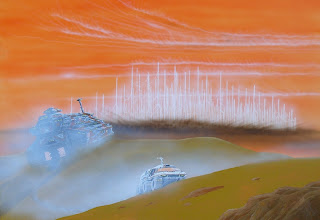 Explorers with some kind of levitating alien city in the background.
Posted by Al R at 03:55 1 comment:

It's done. Over the last week I've been proofreading the 500-plus pages of Blue Remembered Earth, and a couple of hours ago I was able to email my notes back to my publisher. That, barring the small business of promotion, is where my obligations to the book end. It should be a time for celebration, but as always it feels faintly anti-climactic. This is my last chance to make any changes to the text, but since the typesetting has already been done, such changes cannot be substantial. My approach has always been to resist the urge to make wholesale alterations (which would be neither welcome nor economic at this point) but I will allow myself the odd word change here and there, and perhaps the recasting of a sentence or short paragraph provided those changes have no consequences to the rest of the text. What that means, obviously, is that a sentence can only be trimmed if it is clear that in doing so, the next sentence doesn't jump forward a line. By the same token, a sentence can only be lengthened if it doesn't spill over onto a new line. The only minor relaxation to this rule (in my eyes) is at the end of the chapter, where the effects of any changes will be confined to one page only, some part of which is already blank. But even so, you don't want to go around making extensive changes. They'll cost money, and perhaps more germanely, time. It certainly won't make you popular.

Besides, at this point the last person with any objectivity on the book is the writer. By the time I get to proofreading, the story is all but dead to me. It's a piece of timber and plywood stage scenery that I've walked around too often, kicked too much, and seen from entirely the wrong side. I've lost any real sense of what works and what doesn't; I can't judge pace or tone because all I can see are paragraphs and paragraphs of words that I know all too well. It ought not to matter, either, because ideally there shouldn't be much to debate, after all the drafts and rounds of editing that the book has gone through. It doesn't work like that, of course. A book like Blue Remembered Earth is 200,000 contingent decisions lined up one after the other. I think I might have managed to write one or two pieces of short fiction where at the time of submission I was happy with every word, but a novel is an order of magnitude more complex. At this stage in the process all one can do is accept that this is the finished product, and another year or two wouldn't make the slightest bit of difference.

If there's one crumb of consolation to be extracted from all this, I've found it really helpful to be forced back into BRE while in the middle of writing the follow-up. As much as I resented the interruption in my flow of work when it arrived, it's been good to be reminded of characters and themes that might profitably be referenced or developed in the new book.

My method of proofreading, incidentally - in the remote event that it might be of interest - is roughly the following. I get a large bundle of typeset pages through the post. I sit and read them, as carefully as I can, in chunks of no more than 20 - 30 pages at one go. Any longer, and my eye starts skating over the page, no longer attentive to missing words, typos and so on. When I find an error, wish to make an alteration, or flag a query, I mark up the change in green felt-tip and then add a mark to the top right corner of the page. I then continue reading, until I'm done with the book. Only then will I go back through the manuscript, noting these changes back into a document on my PC. Reading the book takes about a week, since for obvious reasons it can't be rushed. Compiling the changes into a file takes about a day; I then email it back to Charlie at Orion. No one but me gets to see the annotated manuscript, and on the second pass I'll generally decide that some of my changes are merely changes for the sake of it, and bring nothing to the novel. One of the running queries in the current book was to check that I'd spelled "Oort" correctly; I had, but it's good to be sure.

I'm hoping these two gentleman will guide my hand during the writing of the Doctor Who novel. 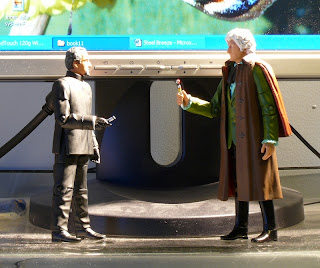 "My dear fellow, you appear to have a large black cable growing out of your shoulder."
Posted by Al R at 06:40 9 comments: