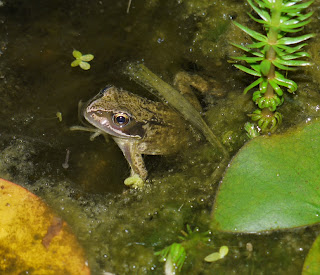 I'm quite enjoying a bit of late-evening frog photography. There's a window of about 10 minutes around dusk between the frogs emerging, and my autofocus not being able to work due to the low light levels. Flash penetrates beneath the water level quite nicely, since all I could (just about) see of this fellow was the top of his head.
Posted by Al R at 12:00 3 comments:

I don't wanna be a nuisance, but as someone who wants to write sci-fi, I find it quite difficult to figure out how to start. Maybe the foundation doesn't have to be a truly original concept, but the development that follows has to be. Where did you get your inspiration from? How do you start writing something so amazing? Do you start off based on a single, simple idea, and build as you go, or do you have a big outline that depicts everything that you plan for the book as a summary which you then follow with details?

With apologies for the self-aggrandizement implicit in quoting that remark, there is something worth addressing here. I've been asked similar questions in interviews over the years, and I imagine I've given reasonably consistent responses, but since such things tend to be ephemeral, there's no harm in returning to the subject.

I'm currently working on my seventeenth solo novel for Gollancz and will soon make a start on my eighteenth. I've also written a collaborative novel with Stephen Baxter, and a Doctor Who novel for BBC books. One or two of my novellas, such as Slow Bullets, are approaching the length of short novels. There are also two unpublished novels that I wrote in my teens. That's easily twenty novels, each of which was (at the very minimum) around half a year''s work, and some which took considerably longer than that. I do feel, then, that I have some demonstrable experience in the business of writing novels. Over the twenty-odd years that I've been writing to contract, too, one might have assumed that I'd have narrowed down the process to something that I could repeat with confidence, a formula for work which allows me to build a novel to a schedule and a budget, where the latter is measured in the amount of creative energy that can be reasonably dedicated to the task over a given period, knowing that one intends to write more novels in the future. The truth, though, is that much of the act of creating a novel still feels essentially mysterious and unpredictable to me, and I still enter into each enterprise with trepidation. Over those two decades or so, I've convinced myself that I can, for the most part, finish novels within an agreed interval, and that somewhere along the line my subconscious will furnish a few story elements that were not in mind at the outset. But the generative process still feels a little like jumping out of an aeroplane, knowing that the ground is six to nine months away, and that one or more parachutes will probably open before I get there. But I don't know that for certain: it's just a level of reassurance built up from experience, but which I know could be easily undermined.

Writing circles like to stuff authors into immutable categories: plotters and pantsers. The categories are more or less self-evident. Plotters do all the structural work up front, mapping the book out in fairly high resolution before committing a word to the page. Pantsers ("seat of the pants") just go for it, and see where the journey takes them. I don't think any writer is wholly one or the other, though. I'm certainly not. I've given both approaches a try, at either extreme, and there are merits in both. But over time I've satisfied myself that I need a middle ground: some sense of an outline, while erring on the sketchy side, and a lot of scope for narrative diversions and surprises along the way.

Over those twenty or so books, I've written several that were based on detailed structural plans, with chapter by chapter outlines. Redemption Ark was one, On The Steel Breeze another. Other books, such as Pushing Ice and The Prefect/Aurora Rising had a reasonably detailed outline, though not to the extent of the aforementioned. Chasm City, Elysium Fire, House of Suns, and several others, were written with the barest outline, just the vague shape of a novel in mind as I started out. To me, there are good things and less good things about all those books, but it doesn't feel to me as if the highly planned ones are necessarily superior to the others, although I may have started them with more confidence. But in the instances where I did start with a detailed plan, there always came a point where I had to deviate from it, sometimes quite abruptly. My feeling here is that novels are fractal, and the devil is in the details. No matter how well I seem to work out the story mechanics ahead of time, when I actually get down to the nitty-gritty of getting it onto the page, I find pitfalls that were always there, waiting to trip me up, and for which the detailed outline provided only a false confidence.

What do I mean by that? I think the problems are always on the level of motivation. In an outline, you can write "they agree to go to Mary's house"  and you're done. But when you come to write it, you're faced with making that plot turn function in a way that the reader will accept as being seamless and plausible within the terms of the story you've already established. Why do they agree? Why Mary's house, and not Steve's? Why go today, and not next week? Resolving those possibilities is, I think, the kind of "hidden" work that is really what writers get paid for. If it's done convincingly, the reader doesn't notice the blood and sweat expended behind the scenes. In my experience (and it probably only proves that I don't go about outlining correctly) no amount of up-front work helps to smooth out these wrinkles ahead of time. In the books I mentioned above, where there was a detailed outline, the work would often grind to a halt for many days while I tried to work my way through what appeared to be an innocuous plot development. For me, the cost-benefit analysis was simple: weeks of planning don't buy me much of an advantage when I'm knee-deep in the novel. So over time I've backed off on the up-front labour and now prefer to proceed with only a rudimentary outline. This can vary from a few scribbled lines on a whiteboard, to a few paragraphs in a document, up to maybe a few thousand words in all. But I don't regard any of it as sacrosanct, and I almost welcome the point where the story breaks loose of the plan, because then I think I might have a chance of surprising myself, and perhaps the reader as well.

None of this gets us close to the inception of the novel, though. Where do they come from, these things? I could give many different answers, and all would be individually true for specific novels, and not generally untrue for any of them.

There is more, and much more, that could be said, but hopefully these remarks will be of interest to some. If there's a takeaway, I'd suggest that all writers will eventually find the approach that works best for them, and if that's nothing like any other process, it doesn't matter. Categories (plotters, pantsers etc) will only get you so far and the aspirant writer should feel free to discard the advice of anyone (including me) who seems excessively confident in the correctness of their understanding of any part of the process of writing. They're almost certainly wrong.
Posted by Al R at 04:25 7 comments: 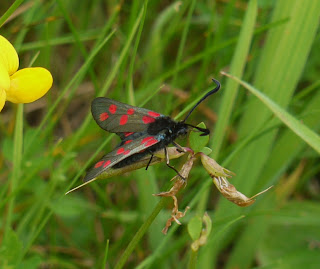 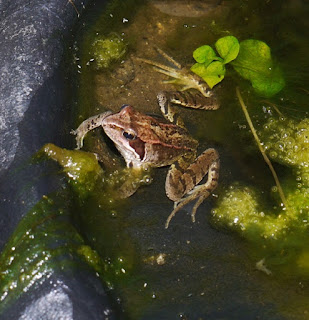 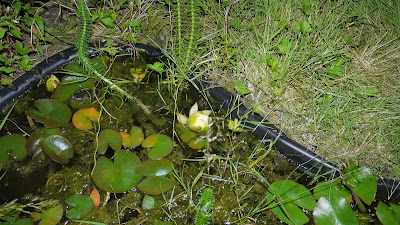