Passed a wordage milestone on the new book, which is always good, and at last the thing's starting to feel that it has some momentum - I've been hitting 3000 a day for the last couple of weeks, whereas the first three to four months felt like chewing my way through solid granite. And, of course, there's been the odd interruption connected with the release of Terminal World, and a couple of conventions. Eastercon, too, is coming up fast, and I must do some preparation for that.

In the meantime - and following on from the Crispy Ambulance mentionment a month or so ago - here's a Guardian piece on another Factory band from that wonderfully fertile era, the somewhat underappreciated Section 25. I've always liked this band (and this track especially) so was saddened to learn that Section 25's Larry Cassidy has just died. As Jon Savage says, "let this transcendent masterpiece be his fitting testament."

By the way, tragically behind on email (as ever). If you've been in touch but haven't had a reply, please bear with me - and thanks for your patience.
Posted by Al R at 11:40 12 comments:

The new SFX is out, with a stunning holographic cover of the new Doctor Who. There's also a two-page feature on me (actually one page, plus big scary photo) and - elsewhere - a review of the new book. Honestly, it's worth having just for that fantastic cover.

On the subject of Who, I've been bingeing on (mainly) Pertwee era adventures of late, courtesy of a rash of reissues from the BBC vaults. Aside from old favorites like The Green Death and The Sea Devils, I've enjoyed rewatching (and comparing against my very dim memories) Frontier in Space, Planet of the Daleks, The Silurians (actually, I didn't remember this one at all - I have no recollection of any of the Liz Shaw adventures) and am now doing the "Peladon chronicles" boxset. Loved Monster of Peladon when I was eight. I'm fond of Tom Baker, too, but Pertwee was the Doctor for me: the one I watched when my critical faculties were still undeveloped, and hiding behind the settee was an entirely reasonable viewing option. Davison was good as well (and the others, of course) but by then my relationship with Doctor Who was as much one of frustration as pure, unbridled enjoyment.
Posted by Al R at 14:29 17 comments:

Just a reminder that I'll be signing at Forbidden Planet in London on saturday 13th March between 1 and 2 pm.

In the comments to the last post, Richard asks about how many items he can bring. To be honest, I've always been happy to go with the flow and sign whatever's offered - preferably some form of written matter although I'll make exceptions. At the same time, it's clear that a person who wants, say, eighteen items signed, can cause a measure of aggravation for those waiting in line behind who may just have one or two items and/or trains, buses to catch. So at Boskone the organisers stipulated that I would sign a maximum of three items at a time; anyone who wanted more than that would just have to go back to the end of the line and wait their turn again. This worked pretty well; no one was left with stuff unsigned and by the end of proceedings, there were only a handful of people in the line anyway so the wait time was small. Ultimately I'll leave it to the shop organisers to dictate proceedings but I can't imagine that we wouldn't be able to work out something similar in Forbidden Planet. There probably won't be that many people there anyway: when I signed for The Prefect, which was the first signing of any kind I'd done in the UK in two years, we got twenty attendees. A year later, with House of Suns, we got twenty three. So - while I'm grateful to each and every one of those people who did show up - I'm not expecting hundreds on saturday. Of course, it would be brilliant if I was proved wrong...

In lieu of anything sensible (and while I catch up on email) here's a wonderful song - one of those pieces of music that you'll either identify, or will perhaps recognise from TV and film soundtracks. I listened to it a lot while writing House of Suns - there's an echo of the "lyric" in there somewhere, I think. And the video contains more genuinely weird and startling imagery than in any science fiction film I've seen lately.

This dropped through my letter box today: 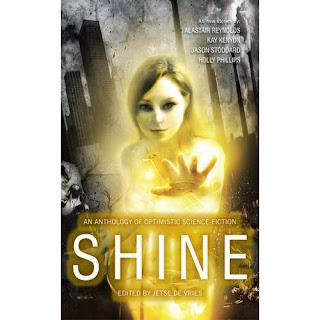 It's the Shine anthology of optimistic, near-future SF, edited by my good friend and scary, Viking-like (or is it Klingon-like) Dutchman, Jetse de Vries.  I've yet to do more than skim the contents but there looks to be some very interesting work in this collection. My own story, At Budokan, is a glimpse into the future of the global rock promotion business - my thinking being that any future which still has the global rock business in it can't be much worse than our own present.
More details:
http://shineanthology.wordpress.com/
I hope Jetse does well with this - I know how incredibly hard he's worked to pull it together, and that he's as passionate about the potential of SF as anyone I've met.
Posted by Al R at 16:12 7 comments: