I haven't had much to report here the last few months, nor much inclination. It's been such a troubling, dispiriting time. Ukraine, of course, but also the death of Taylor Hawkins following so quickly on the heels of Mark Lanegan. I love drummers and I loved the Foo Fighters. I hope Dave Grohl and the rest of the band - not to mention Hawkins' family - have had the love and support they must need at this awful time.

On a more positive note, my wife and I went to see Simple Minds in Cardiff a couple of weeks ago. They were fantastic, anchored by the phenomenal drumming of Cherisse Odei. How she found the energy to keep going through two long sets of older and newer material was a thing of wonder. On a less positive note, we were almost the only people in the arena (besides vending staff) still wearing masks. I know a few were, but the vast majority didn't bother. And, unsurprisingly, we both came down with something horrible a couple of days later. It's not Covid, though, thank goodness. I've nearly lost my voice with a throat infection and have had to cancel a few online things this week, just to rest my vocal cords. (Cords not chords, as I originally wrote. Too much guitar theory).

Back onto more positive things - I've been delighted with a new development in my ponds. As regular readers may know, I created a couple of ponds three years ago. Frogs appeared at the end of year one, and then returned at the end of year two. This year I haven't seen the frogs yet (it may be that April has been just a little bit too cold) but I have had newts!

There are at least three, of which this one seems to be the biggest: 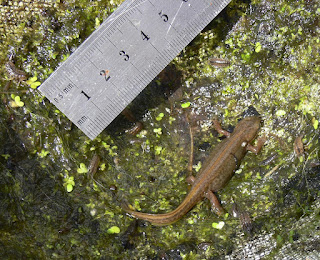 These really are fantastic creatures. I believe this is a smooth newt; one of the others is much paler and with less pronounced patterning but I presume the same species.

The newts may well have gobbled up a large quantity of frogspawn that was kindly donated to me a few weeks ago, (or the cold may have done for the spawn) but as of yesterday there were still one or two tadpoles swimming around so all may not be lost for the next generation of frogs. And I hope that with warmer evenings, I may get a glimpse of the frogs from the last two summers.

I'm thrilled with my ponds and the surprises they provide.