Although I couldn't be there in person, I was delighted with the news that Slow Bullets had won the novella category in this year's Locus awards, held in Seattle. I've never won a Locus award before, although I did get close with Revelation Space, so this was doubly welcome, especially as I've always found the Locus staff to be excellent company.

Locus has the complete breakdown of results:

And here's a photo (picture by Patrick Swenson) of Jacob from Tachyon Press kindly accepting the award on my behalf: 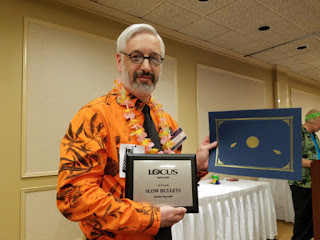 I wrote a few words for Jacob to say on the night:

"Thank you to all who voted for my story. I'm overjoyed to have won this award, especially for a story
that was written as a personal project over a very long period, with no real idea of what the world would
make of it. Marty Halpern did his usual meticulous job as editor, and I couldn't have hoped for a more
enthusiastic and committed publisher than Tachyon, who did a superb job in making sure the story got
noticed and read. Thank you to Jacob, Jill, Jim, Rick and all at Tachyon for giving the book such an excellent
push. I'd also like to thank those writers, including Michael Bishop, Allen Steele and Michael Swanwick who
were so kind as to provide endorsements for the book. Once again I was blessed to be part of such a welcoming
and generous field as ours. Thank you!"

I can only reiterate that it was a pleasure from the word go to work with such people, and everyone else who had any involvement in the distribution and promotion of the book, including Subterranean Press and the Washington Science Fiction Association.
Posted by Al R at 03:01 5 comments:

Why I'm for the UK remaining in the EU

In a very short while the UK will be holding a referendum on the country's continued membership of the EU. At the moment, judged on the polls (which are of course often inaccurate, as with the last general election), things seem to be heading the way of a vote to leave.

I think it would be a great shame were this to happen. As a young scientist, I benefitted tremendously from the freedom of movement allowed within the EU. I'm not talking about my time within the European Space Agency, which is a non-EU organisation, although that experience certainly helped frame my views on European cooperation and integration. But having left ESA in 1994, I was immediately able to take up a two year postdoctoral position at a Dutch university, and I did so with the minimum of hassle and paperwork. Once again I was immersed in a pan-European working environment which I found stimulating and encouraging.

After my postdoctoral position expired in 1996, I found myself unemployed. There were a handful of possible job opportunities back in the UK, but I had grown fond of the Netherlands, and my partner at the time, who later became my wife, had a full-time job. She too had benefitted from freedom of movement within the EU. Disinclined to leave Holland, therefore, I signed on for unemployment benefit from the Dutch state, while continuing to look for work opportunities within the area where we lived. I applied for one job in Delft, working on satellite monitoring of the Earth's atmosphere, but was not made an offer.

Luck eventually intervened, in that I saw an advert in Nature for a newly founded business in Haarlem, which would revolve around developing scientific software for astronomical applications. It seemed right up my street, almost literally so, in that Haarlem was only a short train ride from where we lived near Leiden. I applied for the job and was suitably astonished to learn that the driving force behind the business was an old colleague of mine - and a Welshman, like me, who had settled in the Netherlands. We met for an interview, which went well. While there was a strong prospect of working for the company in the future, though, there was still going to be a few more months of unemployment. I therefore continued to sign on, while going through the motions of looking for work. It was an odd, unsettling time, but - in hindsight - a blessing, because it enabled me to dust off the abandoned manuscript of Revelation Space and finally give it the polish it needed prior to submission. That was early 1997, and the book sold two years later. Those months of unemployment were therefore literally life-changing, and I owe them to the Dutch state and EU regulations on worker's rights.

Many of the arguments for and against membership of the EU seem to revolve around economics, which seems to me to be an extremely narrow metric. Even if we are better off out of the EU, which we probably won't be, so what? This is already a wealthy country, and leaving the EU won't mend the widening inequality between the very rich and almost everyone else. More than that, though, look at what would be lost. Friendship, commonality, freedom of movement, a sense that national boundaries are (and should be) evaporating. When many countries (including the Netherlands) moved to the Euro, it was a joy not to have to pack Guilders, Belgian francs, Deutschmarks, for a simple drive to visit to family in Germany a few hours away. The eradication of visible borders did not lead to a smearing out of regional cultures, but instead it made it much more easy to sample those cultures and gain a deeper sense of European history. I never stopped feeling that living in the EU was a thing to be proud of, and more than ever I am content to think of myself as European before British. I therefore hope that the Remain vote will win the day.
Posted by Al R at 05:30 24 comments: 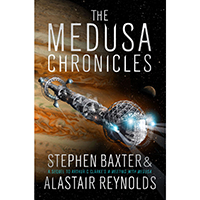 
Join us for a conversation with two leading figures in science fiction, Alastair Reynolds and Stephen Baxter, as they discuss their new collaboration The Medusa Chronicles. Inspired by the classic Sir Arthur C. Clarke's short story ‘A Meeting with Medusa’, The Medusa Chronicles continues the story of Commander Howard Falcon over centuries of space-exploration. One of the most compelling novels of either author’s career, it combines moments of incredible action with an intricately-realised depiction of an expansive universe."