Earlier this year I wrote a new novella about time travel, which I'm pleased to say will appear from Tor books in March 2019. 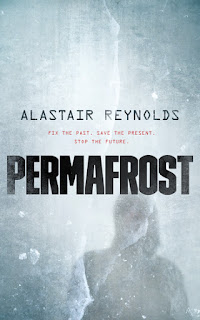 Cho reached into a pouch behind the pilot’s position. He drew out a document and passed it to me. It was a scarlet brochure, with a translucent plastic cover. On the front was the World Health logo, followed by a statement in several languages to the effect that the contents were of the highest security rating.

I looked at him doubtfully, before I opened the document.

I opened the document.

On the inside page was a logo. It was a six-armed snowflake with three letters in the middle of it.

I turned over to the next page. It was blank except for three words in Russian:

I like novellas, both as a reader and a writer. Lying somewhere between 17,500 and 40,000 words, according to the people who decide these things (other definitions are available), they've got a bit more room in them than novelettes or short stories, but don't risk overstaying their welcome in the way that some novels do. Themes can be developed at a depth not really possible in the shorter forms, but at the same time the novella still encourages a tightness of approach, usually confining itself to a single viewpoint. It's been said that the form is particularly well suited to science fiction, and while I don't know how healthy the novella is in the wider literary world, it's certainly enjoying a period of renewed vitality within SF. The long-established print magazines such as Asimovs have always found a home for novellas, and in the last decade or so specialist publishers such PS Publishing, Subterranean Press and Tachyon Books have championed the form via various chapbooks and collector's editions. Even more recently, the form has been embraced by Tor with a line of novellas that have done very well, including such fine works as Nnedi Okorafor's Binti.

As daunting as it is to join such company, I couldn't be happier to have been given the chance to write this story, especially as it involved working with the ever-excellent Jonathan Strahan, an editor who not only knows and understands my work, but has published no small amount of it. When Jonathan kindly approached me about the possibility of doing a novella, I was fairly sure that I wanted to tell a time-travel story. I've long been fascinated by the form - one of my earliest memories is of watching the George Pal version of Wells' The Time Machine - but for the most part it's one I've kept well away from in my published fiction to date. Yes, there's a sort of pseudo-time travel in Century Rain, and some stuff about quantum signalling from the future in Redemption Ark (and elsewhere) but neither of those instances are real, true-grit time travel stories. By which I mean, one in which a protagonist goes back in time and gets to see, feel and taste the past. That's what I wanted to write, though, albeit with some self-imposed restrictions. Without getting into spoilers, I knew the sort of story I didn't want to end up with, and that included any plot that involved a time machine that functioned as either a vehicle (something you got into) or a portal (something you stepped through). I also didn't want a story that involved time-loops or time-paradoxes as they are conventionally handled, but I soon realised that making certain kinds of time-loop front and central to the story could be interesting, especially if handled in a matter-of-fact, technical manner, as it would be to any highly-organised time travel project.

I've said too much, so that's enough from me for now, but in the meantime you can find out a bit more about the book here:

There'll be another book from me in early 2019, as well - Shadow Captain, which is now edited, proofed and in production - but I'll say a bit more about that in another post. In the meantime, I'm half way through Bone Silence, and tentatively beginning to think about the book beyond that.

Tempus, as they say, Fugit.