For the next week or so I'll be blogging at Babel Clash, the Borders science fiction blog. My first post has just gone up.

This is me just before getting into the front cockpit of this Boeing-Stearman Model 75, a WW2 trainer that is now based at Fantasy of Flight near Orlando. I took a half hour flight and was "hands on" for a good chunk of that time. It was an absolute blast. We did left and right turns at 30, 45 and 60 degrees, as well as some "lazy eights". Prior to this my only experience of flying came through Microsoft Flight Sim, and it's a testament to the realism of that software that it felt incredibly familiar, especially as I was using a stick rather than a yoke. 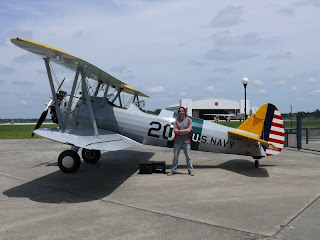 House of Suns under discussion

Joseph Mallozzi, executive producer on Stargate: Universe has kindly selected House of Suns for discussion as his July Book of the Month.

STS 132 launch, post-roll and srb separation. Many thanks to Piers Sellers for giving my wife and I this opportunity to view a shuttle launch, and to Louise Kleba for doing the same last year. It doesn't get much more awesome than this. 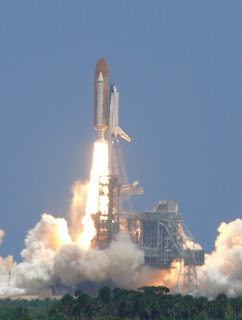 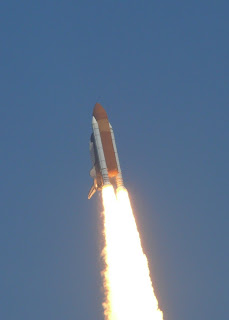 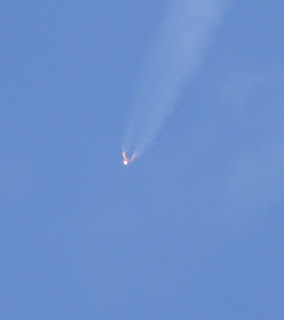 Just a brief update here. I'm in Florida, intending to catch the STS-132 launch on friday. Not that I'll be on Atlantis, mind, but certainly aiming my camera at it and hoping - unlike last time - not to lose said camera a few hours later. If I do get some usable pics, I'll post them up here. Excited? Just a bit.

Meanwhile, thoughts on Doctor Who in the last post prompt me to mention Stargate: Universe, which has resumed its second half-season run (or whatever they call these things) and is - in my view - really quite good and worth checking out. Other than the Kurt Russel film, and the occasional incomprehensible episode caught on some hotel TV channel over the years, I've never seen anything related to the Stargate franchise so I came to this more or less cold, and it's very, very enjoyable. The premise is excellent, big dumb object stuff: a crew of military and civilian types end up stranded aboard a huge alien spacecraft zipping away from Earth. It's the present day, more or less, so they have only limited tech, and of course only what they managed to bring with them during the hasty boarding process. The ship (Destiny) is huge and mysterious but essentially benign - it's like an abandoned ocean liner, with some really inventive and convincing "alien art deco" set and prop design work. Because they've been exposed to other relics left behind by the same aliens, the humans have some idea how to get the ship to work for them, but not everything is (yet) in their control. The ship appears to be retracing the network of FTL stargates left behind during an earlier phase, so it makes period hops through hyperspace before emerging within gate range of some planet or other. Typically, the crew have several hours to use the onboard stargate (or shuttle) to explore the planet, before the ship goes FTL again. In its planet-of-the-week structure, it's a bit like Space:1999, only done right. The character interactions work well, with tension developing between the civilians and military staff - but in a believable, not too melodramatic way. After a botched civilian takeover, the two parties have - shock, horror - to work together and rebuild trust. Robert Carlisle is very good as the scientist Rush, as well, albeit a little too obviously the sociopathic mathematician type. It's a long way from Hamish Macbeth and Begbie, that's for sure.

What's great, though - and has me wondering why this series hasn't been making bigger waves - is the way science is handled. Granted, the show has to work with the existing setup of the Stargate universe, so you've got FTL and some kind of psychic communication network which allows the crew to periodically hop into the bodies of people back on home on Earth. But all that's handled intelligently, and what's really impressive is the amount of actual, honest to god science the writers have managed to work into the episodes. In a recent installment, for instance, the ship came out of FTL around a young star that wasn't even around when the Destiny's charts were compiled. The star was identified as still being in its T-tauri phase, which immediately made a paradox of the fact that it appeared to have an old, Earth-type planet in orbit around it. Now, the episode didn't go on to provide an unequivocal explanation for this riddle - other than by suggesting that the planet had to be some kind of artefact - but it was the mere fact of framing this puzzle in the first place that had me impressed. This is actual stellar astronomy, slotted neatly into TV SF. I don't know the exact extent of his involvement, but one can only presume that "creative consultant" John Scalzi has a lot to be thanked for here - if so, good on him, and good on the show's people for taking the step of bringing someone like Scalzi in. I also can't help but think that if SF:U had been on telly ten or even five years ago, before the recent rash of successful, intelligent SF shows (not all of which have been to my taste, it has to be said) fandom and the blogosphere in general would be going absolutely bananas for it. It's exactly the kind of TV SF show we've been moaning about not getting for years - and now it's on and the general concensus seems to be borderline disinterest. I might be reading things wrongly, though. I hope I'm not, and I hope the show picks up enough viewers to sustain its run, because I want more of it.

I've been watching the new Who and - for the most part - enjoying it rather a lot. Matt Smith is excellent in the role; as we were promised, he inhabits the character from the off, and within a few scenes of the first episode he simply was the Doctor. I felt exactly the same way when Tom Baker took over from Jon Pertwee. That sense of fluid continuity is one of the great strengths of the show. I'm still wondering where they're going with the Amy Pond character, but for now I'll be glad if she turns out to be just a companion, rather than someone with secret powers or some mysterious connection to Time. As for the differences between Moffat and RTD-era Who, maybe I'm thick, but I'm not seeing some huge step-change in style and approach. It's still New Who, still a very different beast to the old shows before the cancellation. And I like it, generally. I like the way the writers haven't been afraid to put their own stamp on things, even at the expense of irritating long-term fans such as myself - see, for instance, the rebooted cybermen. At the same time, there's a willingness to dig deep back into Who history and toss in references to things we haven't heard of since the Troughton earlier, or even further back. It's all good and I sit there on saturday evenings like I'm eight again. All I'd need is a plate of bangers and mash and I could be sitting down to watch Invasion of the Dinosaurs or the Monster of Peladon.

But ... and this matters, I think - there's something I'm not seeing nearly enough of. Terry Pratchett touches on something similar in this SFX piece but my complaint isn't precisely the same. It's not that the science in Doctor Who is especially ropey now, as compared to before. It always was ropey, from day one - a point I made in my review of "The Science of Doctor Who" book a few years ago. Having the Tardis drag Planet Earth across the universe may have been a low point but I could point to scores of similar absurdities in Old Who, and not just from the bad old days when the show was unloved and near its end.

What's lacking, I think - or not being handled in the right way - is the Doctor's attitude to science. This came up in a conversation I had last year with one of the UK's top public astronomers, like me a lifelong fan of Who and willing to take the new version on its own terms. What we agreed on was that - for us, growing up in the sixties, seventies and so on - the Doctor had been an important role model, one of the few scientists portrayed on television in a remotely flattering light. Beyond the Doctor, there was Mister Spock ... possibly Brains from Thunderbirds ... and that was your lot, basically. The Doctor was the only one you'd conceivably want to be, though. He was the only one who wasn't emotionless or nerdy - and he had a Tardis, groovy companions, and a universe to explore. And he was a scientist - maybe not by profession, but by training and inclination, and through all the adventures, what shone through was that the Doctor always fell down on the side of reason and enlightenment. He had no truck with magic, superstition, religion (although he conducted his affairs with a basic sense of tolerance and fairmindedness) - and he wasn't afraid to parade his own intelligence. Look at the aforementioned Monster of Peladon, for instance. It's the Doctor's insistence that the Aggedor apparitions can't be real - that there must be some technology behind the hocus pocus - that eventually leads to the resolution of the story (it was the Ice Warriors wot dunnit). Yes, the science might be ludicrous - but it was the Doctor's respect for science and rationality that mattered, and ultimately carried the day. This, to me, was as important a strand in his character as his pacifism and decency - not more important, but equally so.

I get flashes of this in New Who but not nearly enough to reinforce this as an essential element of his personality. Nothing could sum this up better than the "timey-wimey" line from the Tennant era. Yes, it was a good bit of dialogue, and raised a smile at the time. But this is The Doctor, for pity's sake - when has he ever felt the need to be so vague, or so apparently ashamed of his own intellect? I was disappointed with that, as I've been disappointed with the questions the Doctor doesn't ask. The Weeping Angels, for instance. They're a brilliant and scary creation, hats off to Moffat. But why doesn't it ever occur to anyone to wonder why they look like stone statues? What's that all about? Are they stone all the way through? Entirely stone? I know the show has to work to a much tighter format than it ever did in the past, and there simply isn't room for every last bit of dialogue - but still, surely there's room for just one or two hints that the Doctor is a questioning man, a scientist at heart.

Anyway, as I said at the start - I'm still enjoying it. But I'd like to see just a bit more of a sense of where our man stands. Is he for the enlightenment, or against it?


(As an addendum, here's a quote from one of the comments in the SFX thread, which says it better than I just have:

"In the old days, of course, the approach, the attitude, was always fairly rationalist. Whatever fantastic events were going on, the Doctor always regarded the universe as ultimately logical and explicable, and would never do anything really nonsensical. Nowadays that’s out of the window and anything goes.")
Posted by Al R at 03:05 9 comments: