Uploaded a few "new" paintings to the SF Artwork section on my website. Actually this one is new; I started it last monday and finished it four nights later. 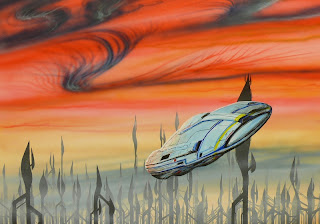 I'm on the Coode Street Podcast, with Jonathan Strahan and Gary K Wolfe. We recorded it in Reno back in August. It had been a long day - I'd flown in from LA, via Oakland, and then had a rush to check in to my hotel and then get over to the convention centre in time for a meet-up with the Locus crew. After a few beers with Ian Mcdonald and various parties, I then headed for a wonderful but eyewateringly expensive steak, and then Jonathan, Gary and I repaired to a hotel room to record the podcast. I don't think I was firing on all cylinders by that point, but playing it back, and allowing for the odd thoughtful pause, I don't sound quite as slow-witted as I remember feeling, so maybe all was well after all. As always, Jonathan and Gary were terrific company - I could spend all day talking about SF with these guys - and indeed we did continue the discussion, down in the casino bar.

For those not following my twitter feed, I'm going to be taking part in Dr Karl's live science phone-in, tonight, on BBC Radio 5's Up all Night with Rhod Sharp. Our segment is supposed to go out between 2.30 and 3.30 AM although it might shift a bit depending on the running schedule. The program will be available on iplayer for those in the UK.

Dr Karl and I did a couple of radio shows back last year and had a great time. We were in the same studio in Sydney then; now we're a tiny bit further apart...
Posted by Al R at 15:02 3 comments: 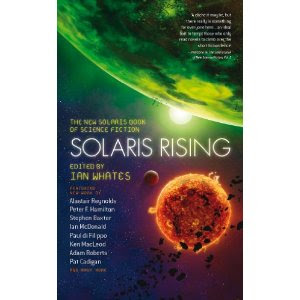 "A Smart-Mannered Uprising of the Dead" by Ian McDonald
"The Incredible Exploding Man" by Dave Hutchinson
"Sweet Spots" by Paul di Filippo
"Best SF of the Year Three" by Ken MacLeod
"The One that Got Away" by Tricia Sullivan
"Rock Day" by Stephen Baxter
"Eluna" by Stephen Palmer
"Shall I Tell You the Problem with Time Travel?" by Adam Roberts
"The Lives and Deaths of Che Guevara" by Lavie Tidhar
"Steel Lake" by Jack Skillingstead
"Mooncakes" by Mike Resnick and Laurie Tom
"At Play in The Fields" by Steve Rasnic Tem
"How We Came Back From Mars" by Ian Watson
"You Never Know" by Pat Cadigan
"Yestermorrow" by Richard Salter
"Dreaming Towers, Silent Mansions" by Jaine Fenn
"Eternity's Children" by Eric Brown and Keith Brooke
"For the Ages" by Alastair Reynolds
"Return of the Mutant Worms" by Peter F. Hamilton
Posted by Al R at 06:20 6 comments:

Word frequency cloud for a large chunk of BLUE REMEMBERED EARTH, via tagcrowd.com.

You'll have likely seen this already but here's the cover of the new book: 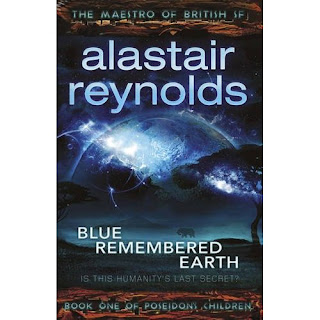 I'm delighted with it; I think it does a fabulous job of not only capturing the main themes of Blue Remembered Earth, but also of hinting at the elements (should that be elephants?) that will come to play an increasingly significant role in the successive books. And the colours are gorgeous. I've seen a door-sized blow-up of this cover and it's a thing of real beauty.

As for the next book, I'm well into it. It's a skewed take on very slow interstellar travel, picking up the threads of BRE a few centuries down the line. The main character, like Geoffrey and Sunday in BRE, is an Akinya - but it's a bit less straightforward than that. It's also about humans and machines, longevity, memory and identity, alien intelligence, exoplanets, and elephants.
Posted by Al R at 02:11 20 comments: