The British-born astronaut Piers Sellers died on December 23rd 2016, only fourteen months after his diagnosis of pancreatic cancer. Piers was a hugely respected figure within the scientific and astronautical communities, a veteran of three shuttle missions who rose to the directorship of NASA's Earth Science Division at the Goddard Space Flight Center. Knowing full well the likely term of his diagnosis, Piers nonetheless preferred to spend the last year of his life working with friends and colleagues, and doing all that he could to spread the word about global climate change. Piers was a passionate and optimistic advocate of the scientific worldview, and despite all the setbacks he believed that human will and ingenuity would always win through in the end.

He was also an avid and informed reader of science fiction, which is how our two very different worlds intersected. A couple of years after I'd left ESA, but while I was still living in the Netherlands, I got a phone call out of the blue from a NASA employee, Tim Kauffman, who was visiting ESA while involved with the International Space Station. Tim was a reader of my books and we happily agreed to meet for a coffee the day after, when he had an afternoon free of meetings. As it happened, Piers joined us and the three of us spent an incredible couple of hours talking space, science and science fiction.


Later my wife managed to get to the hotel where we'd arranged to meet up for coffee: 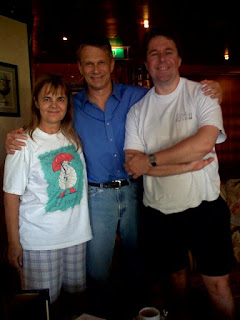 The conversation would have flowed, but my wife and I were booked to ride some horses that evening, so with much regret we had to leave. But that afternoon with Tim and Piers left an indelible impression, and we were to keep in touch with both of them.

Piers was exceptionally generous with his time and kindness. I'll mention two things in particular. During STS-121, the flight of Discovery in July 2006, Piers had taken a photograph of that rarest of things: a completely cloudless Wales. He promised to send me a copy of this unlikely image and it duly arrived, signed by Piers, and it's up on our living room wall as I write this.

Piers also carried a print of the first photograph above (the two of us sitting down) into space. He placed it on the frame of the observation cupola in the ISS, with the Earth beyond the glass, and took a photo of that. So I can truthfully say that there was a photo of me on the International Space Station.

Despite keeping in touch over the ensuing years, we only met twice. We came very close to each other on a third occasion - but only because Piers was four miles away, in the Space Shuttle Atlantis, while we watched from the viewing galleries. My wife sent him an email on the morning of the launch. Piers responded - he was actually in the shuttle, waiting to go.

The second and final occasion was a little over a year ago, just before Piers received his diagnosis. In October 2015 I attended the Capclave convention near Washington DC. It was too good an opportunity not to hook up with Piers again. The only snag was that Piers was leaving town shortly after we arrived, with the only available evening being the one where we arrived in DC. Tired after a transatlantic flight, and with just barely enough time to dump our bags at the hotel, we nonetheless made it to Piers' beautiful house for what turned out to be a delightful, stimulating evening of great food and conversation.

Piers' diagnosis came as a terrible shock to his friends. But I spoke to him last Christmas and his strength of spirit was incredible. I told him about my new telescope mount and throughout the year sent him the occasional image of whatever I'd managed to capture, on those rare instances when it wasn't clouded over.

Those of us who were fortunate enough to have met Piers Sellers will feel an awful void now that he's gone. But we'll be left with his immense optimism and the memory of a generous, genial man.