Space travel's in my blood

If SF has lost its collective faith in the future, what does that say about those stories that take place predominantly in space, or on other worlds? Is this no more than the twitching tail of a dying wish-fulfillment dream better consigned to the garbage heap of the twentieth century, a fantasy that has nothing useful to tell us about the real future, that thing that our descendants are going to be living in whether they like it or not? There are many that seem to think so, judging by my own entirely subjective experience of internet discussions and the like. As far back as the late and not very lamented Mundane SF movement, we were being told in no uncertain terms that merely to speculate about the possibility of leaving the solar system was a dangerous abdication of responsibility, a tacit acceptance that, having trashed one planet, we were at liberty to do the same to the others. More recently, in the discussions revolving around the purported exhaustion of SF, I have seen similar sentiments expressed - a perception that this space stuff is all very well as undemanding entertainment, but it really is a bit beneath us now.

It's not hard to see why people might think that way. SF has always presented many Janus faces to the world, but there are some faces it feels more comfortable about than others. SF is very pleased with its Earthbound dystopias, its grimly forbidding ecocatastrophes and other such dire warnings of times to come on our own planet. It is rather less happy with all the stuff about rocket ships and alien planets, as if that was now all a bit juvenile, best locked away in the attic room of the imagination while the visitors are around. The fact that, fifty years into the human space age, we have yet to venture further than the Moon, is seen as damning evidence that it was all a bit silly and unrealistic to begin with. Dream on, girls and boys. The space age is over.

This has always struck me as a slightly odd position, but in addition it also strikes me as a two-pronged oddness. The first prong of oddness is that SF has never really been in the predictive or extrapolative business. That's a mug's game. So what does it honestly matter if, here and now, we are in the spacefaring doldrums? SF should not concern itself with writing about the most probable future, it should concern itself with what is the most fictionally interesting - be that probable, possible or downright unlikely. Did Philip K Dick consider the future of Do Androids Dream as likely to happen - or did it just strike him as fictionally rich territory, worth treating as if it were probable? (Which is not at all the same thing as believing in it). I'll leave you to answer that one, but I know where I'd come down.

The second prong of oddness is that: hang on - we're only fifty years into the human space age. That's fifty years behind us, counterbalanced by hundreds, thousands, even millions of years ahead. Really, I'd argue, we are in no fit position to debate the likelihood or otherwise of our having a significant destiny in space. It is simply much, much too soon to rule anything out. Still, having said that, I think anyone would agree that there are only two possible futures at stake here: one in which most of us never leave the Earth, or do much more in space than we have already done, and one in which most of us do. And whether "we" means us, or our robots, or our distant posthuman cybernetic offspring, really need not concern us. The point is that there are two futures open to science fiction  - one in which we remain on Earth, one in which we break out in the solar system/galaxy/universe/sevagram - take your pick.

Both strike me as equally fascinating, offering equally rich imaginative scope. It also strikes me that it is absurd to privilege one over the other, to say that this branch of SF is intrinsically more worthy of serious consideration than this other one.

Over on Twitter, I'm following @WaxwingsUK, the handle for UK waxwing observations. With the cold weather, these enchanting migrants have begun to return to our shores and there are reports of sightings in many counties, although as yet none near me. I love these marvellous birds but have only been fortunate to see them on one occasion - or rather, one period of a few days (2006, I think) in which a large flock made themselves at home in a couple of trees near our home in Noordwijk, Holland, during a particular cold snap. Waxwings are remarkably tame so if you are fortunate enough to have them near you, you can stand a good chance of getting very close indeed.

Fighting winter light and an unfortunate sun angle, I failed to get any really fantastic pictures - certainly none that capture the beautiful colours of their plumage, and certainly none that record their lovely trilling song - but you take what you can get, and I have been pleased to have this record of my one waxwing sighting ever since. 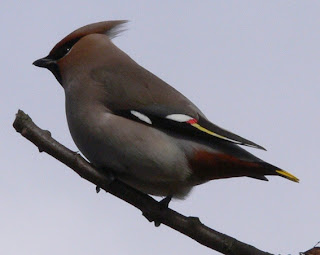 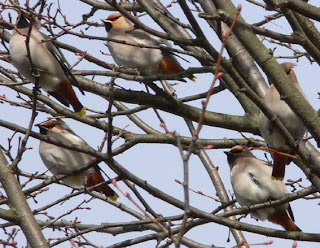