This weekend I'll be participating in Space, Time, Machine and Monster, a literary festival in Newport, South Wales.

"Following a hugely successful first outing in Pontypridd in 2008, the Space, Time, Machine & Monster literary festival returns for two days packed full of science-fiction, fantasy and horror. Expect talks, workshops, film screenings, panel events and competitions for adults, teens and your little horrors.
Event highlights include a talk with Rhianna Pratchett on the world of narrative gaming; and Page to Screen: Sci-fi, Fantasy and Horror with Catherine Bray who is currently editor of Film4.com and a regular guest presenter on BBC1′s Film 2013 With Claudia Winkleman. Plus, discover the real science behind Doctor Who with Mark Brake and Jon Chase and explore the work of Arthur Machen and J.R.R. Tolkien with Catherine Fisher, Gwilym Games and Dimitra Fimi.
There will also be the chance to explore the world of Warhammer and take part in a series of battles waging throughout the day, or you could create your own animated alien universe, zombie comic and even your own origami Star Wars character. The programme features a top line-up of speakers, authors and illustrators including, Huw Aaron, Ben Aaronovitch, Horatio Clare, Jasper Fforde, Catherine Fisher, Gwyneth Lewis, Alastair Reynolds, Stephen Volk and many more.
Bestselling fantasy author Jasper Fforde commented: "There are clearly not enough zombies or Time Travel in South Wales, and I am delighted to see Literature Wales addressing that imbalance"

I note also that the excellent Adam Roberts will also be attending. My events are on the Saturday, and I look forward to seeing some of you there.
Posted by Al R at 11:30 3 comments:

According to popular wisdom, all writers have at least one early and unpublished book that is best consigned to obscurity - the so called "trunk novel", the idea being that you keep it locked away in a trunk rather than doing the sensible thing and binning it. According to another branch of popular wisdom, the first thing writers do when they're stuck for inspiration is dust off a trunk novel and pass it off as a fresh new book. I'm sure that happens occasionally, but I suspect the truth is that most writers would rather throw themselves under a bus than see their juvenile work reaching print. More probably, I'd suggest, we look on these things as part of the necessary learning curve of becoming a fluent writer - we don't have to admire them, or even like them, but we can understand that they were an essential part of our literary development that we had to pass through. There may even be elements of these unpublished works that, with a little recasting, can still filter through into our professional work.

My two trunk novels don't live in a trunk and while they're not exactly representative of where I'm "at" as a writer in 2013, I'm certainly not ashamed of them. I keep them on the same shelves as all my other written works, and look on them with a sort of tolerant fondness. I take them to schools and libraries and pass them around. I don't have any illusions as to the quality of the books, but I am proud that I started and finished them. They were vital stepping stones on my path to becoming a published writer, and if they served one useful function, it was to cure me of any fear of The Novel.

Here they are, in exactly the same ring folders in which I started them: 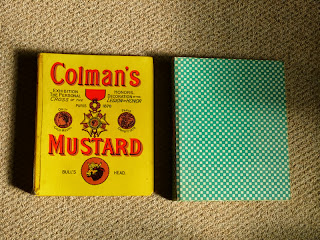 Exciting, aren't they? I bet you can't wait to see what's inside those enticingly patterned covers.

Wait no more, because here are the thrilling title pages: 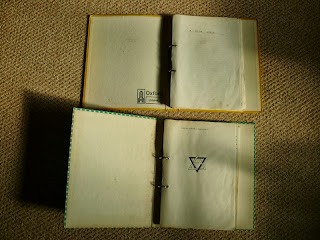 The uppermost book, the one in the yellow Colman's Mustard folder, is "A Union World", which I wrote between 1979 and 1982. It took a long time because whenever I got to the end of the book, I hated the start. This initiated a Forth Bridge-like process of constant revision which might have gone on forever had I not decided to finally accept the book on its own terms and stop.

When I began "A Union World", my science fiction horizons were very limited. I enjoyed TV and cinema SF, 2000AD magazine, and had read a bit of Clarke and Asimov. But I was really pretty clueless. When I finished the book, my literary tastes had widened to include the likes of Larry Niven, Harry Harrison and James White - true eclecticism, I think you'll agree. During the late revisions, indeed, I tried very hard to emulate the tone and scope of Niven's Known Space sequence. The novel deals with the human space federation making first contact with a number of different alien factions. It has colony worlds, FTL, robots, space battle fleets and so on. The plot, such as it is, revolves around a military research base on a distant colony world, which has mysteriously severed all contact with Earth. In a setup surprisingly similar to the opening act of Aliens, the Colonial forces decide to send in an assault ship full of elite soldiers to retake the base and establish what has happened, and in doing so recruit (or rather blackmail) a civilian pilot into helping them out. It turns out that the civilan's creaky old space freighter has an outmoded drive system which means it's the only ship that can enter the planet's atmosphere undetected, enabling the troops' dropship to be placed close to the compromised base. Later on we discover than an alien mastermind has taken control of the base, plans to enshroud it in a force field, and use planet-destroying bombs to literally shatter the entire rest of the planet, so that the base becomes a free-flying space fortress. This all happens! Later, predictably, there's an enormous space battle between the combine forces of Earth and the flying space fortress. There's even a space-aircraft-carrier called the Ark Royal.

The second book, entitled "Dominant Species", is of similar length and takes place in the same universe. But I wrote it in a much shorter span of time compared to the first. My recollection is that I started it very late in 1983 and finished it somewhere around the Spring of 1984 - in other words, in a few months rather than a few years. The upside of that intense burst of creativity was that the book was much more uniform in its style, and actually had a plot that made a kind of sense. The downside is that I really should have been studying for my 'A' levels in 1984, which I duly failed in spectacular fashion. But at least I had a novel to show for it.

Both books are handwritten in their entirety, on lined A4 paper, in black biro: 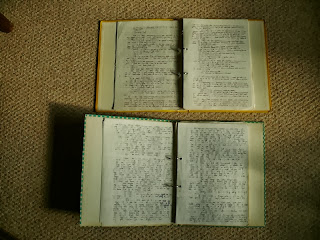 I've still got a bit of a thing about black biro: I can't be doing with blue at all. I also used a tankerload of Tip-Ex correction fluid, and where that wasn't practicable, I either rewrote the entire page (front and back) or glued a small insert over the offending section. Years later, I'd go through a very similar process of cutting and pasting while preparing the artwork for my PhD thesis, so the experience certainly wasn't wasted.

I shan't say too much about the second book, except that it picks up the story of the human expansion a bit later on, and there are some more aliens and giant flying space things. Neither book takes place in the Revelation Space universe, incidentally, but a lot the furniture and character names of the RS stories show up here for the first time. Most of the planet names, as well as some of what would be later be principle characters in Revelation Space such as Sajaki and Captain John Brannigan, but here in very different roles. 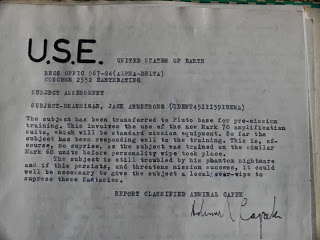 At the time I wrote the second book, I was heavily influenced by the "fake documents" style of Joe Haldeman's second novel, Mindbridge, and so I made up a few fake documents and logos to be inserted into the text. Looks fantastically convincing, doesn't it? I'm sure they'll still be using typewriters with sticky ribbons in 2332, and won't yet have solved that tricky "right justification" problem.