That's great! It starts with an earthquake,Birds and snakes, an aeroplane;Lenny Bruce is not afraid.Eye of a hurricane, listen to yourself churn.World serves its own needs, don't mis-serve your own needs.Speed it up a notch, speed, grunt, no strength.The ladder starts to clatter with fear of fight, down height.Wire in a fire, represent the seven gamesIn a government for hire and a combat site.Left her, wasn't coming in a hurryWith the furies breathing down your neck.

Team by team reporters baffled, trump, tethered crop.Look at that low plane! Fine, then.Uh oh, overflow, population, common group,But it'll do. Save yourself, serve yourself.World serves its own needs, listen to your heart bleed.Tell me with the rapture and the rev-'rent in the right, right.You vitriolic, patriotic, slam, fight, bright light;Feeling pretty psyched.
Posted by Al R at 09:07 2 comments: 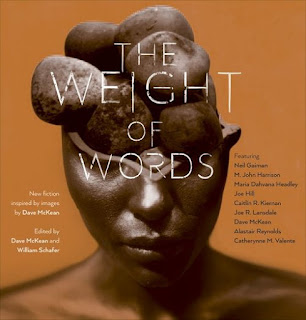 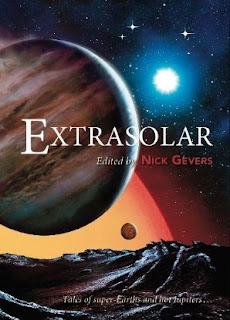 I'm very pleased to have a new short story in this excellent-sounding new anthology featuring a fine line-up of writers, edited by Nick Gevers.

Here's a description of the book:

Among the brilliant visionary scenarios in Extrasolar: military antagonists meet in the atmosphere of a gas giant; gifted children hijack a starship to search out a new home; a superjovian world yields mysterious and much-coveted gemstones; aliens find our solar system disconcertingly paradoxical; a feminist SF writer of the Seventies crafts liberating exoplanetary dreams; the habitats aboard a gargantuan spaceship cater to the needs of truly exotic aliens; and scientists eagerly seeking exoplanets confront a devastating truth. And then there are songs of home and far away and bitter exile; intelligence calling to intelligence across light years and species barriers; utterly immersive dives into perilous planetary atmospheres; brave responses to enigmatic messages from the stars; a machine embracing a Gothic destiny; and a truly different kind of space opera.


The book is available to purchase from PS Publishing. More information here:

Recent reading included five autobiographical books with a common background in medicine. I found them all equally compelling and fascinating. Two of the authors are now deceased. 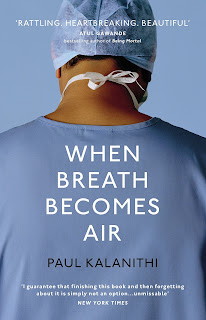 Full disclosure: I first encountered Paul Kalanithi's book as part of the reading for the 2016 Royal Society science book prize. Although the book wasn't one of those to make the final shortlist, I still found it to be a powerful and affecting piece of literature, not least because Kalanithi did not live to complete his own manuscript. On the basis of this book, he would have been a very gifted medical communicator, writing engagingly and lucidly about his chosen profession of neurosurgery. What makes the account striking and perhaps unique is that the still-young Kalanithi was himself diagnosed with lung cancer, the diagnosis, treatment and eventual outcome of which is treated with unflinching honesty. It's commonplace to talk about the courage of cancer patients, and perhaps not always helpful, but when Kalinithi eventually returns to the gruelling demands of neurosurgery, it's hard not to feel admiration at his mental and physical fortitude, knowing full well the likely progression of his disease. The book was eventually completed by his wife, Lucy Goddard Kalanithi. 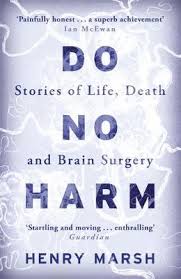 Henry Marsh is a brain surgeon who has achieved a modest degree of celebrity thanks to television appearances. His two memoirs, published over the last few years, document the ups and downs of his career and his transition - sometimes uneasy - to a life of somewhat discontented retirement. Along the way he works to assist neurosurgical colleagues in the Ukraine and Nepal, not always with entirely positive results. Throughout the memoirs, Marsh is tormented by difficult ethical considerations, constantly balancing the risks of surgery against the likely outcomes and the anticipated quality of life. 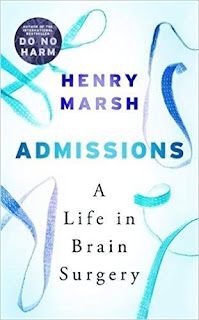 Near the end of the second book, Admissions, Marsh makes an impassioned case for right-to-die legislation. It makes for uncomfortable and challenging reading, but few professionals will have been confronted with the actualities of end-of-life care and mortality as often as a brain surgeon, and it is hard not to be swayed by Marsh's case. 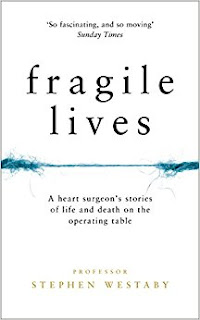 Westaby is a heart surgeon and a friend of Henry Marsh, and despite their rather different backgrounds, there's a distinct similarity of tone and surgical methodology running through the writings of both authors. They have each come up through the NHS in the last forty years; both bear witness to the triumphs and failures of that organisation; both seem at times to be righteously enraged by the slow accretion of bureaucracy and privatisation, choking and fragmenting the very institution they both served and loved. Both surgeons seem driven to form a personal, human connection with their patients, over-joyed when procedures work well, intensely saddened and troubled when the outcomes are not as positive. They are about as far from the image of the cold, detached physician as it is possible to imagine. 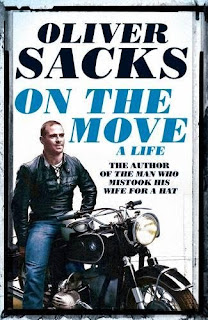 I adored the writings of Oliver Sacks - I read almost all of his popular books  - but found this autobiography almost too painful to approach in the immediate aftermath of his death in 2015. After two years, I felt I could return to it, and it's a glorious capstone to his writings, candid and generous in equal parts. Sacks' life has always been a thread in his medical stories, and if you have read Uncle Tungsten, his earlier autobiographical account of his intense love of chemistry, you will pick up on a certain amount of common ground as Sacks relates his upbringing in a bustling, loving Jewish household in London, surrounded by encouraging parents, devoted aunts and uncles, bright siblings and an environment of intense intellectual stimulation. Sacks moved to North America to pursue his interests, and the early chapters of the book - illuminated by his long, discursive diary entries and letters home - are a colourful snapshot of a time now past, during which Sacks indulged his deep fascination with motor bikes and champion weightlifting, while finding his way in the gay communities of the early nineteen sixties. Along the way, we revisit the fascinating and tragic story of the post-encephelitic patients, recounted in the book Awakenings, and the Robin Williams film of the same name. Sacks was clearly impressed with Williams's depth of engagement in the part, achieving an chameleon-like mimicry of both the patients (thanks to visits to clinical facilities) and Sacks himself, whose mannerisms Williams began to imitate in an almost subconscious fashion. At the time of the film I assumed that Williams bore no resemblance to the real Sacks, but period photos put me right: the casting was uncanny.