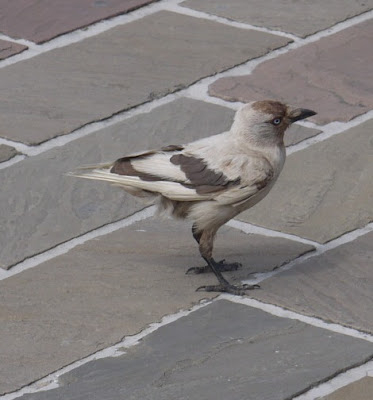 I posted this picture and linked to it from twitter, forgetting to put an explanation here. It's an unusual bird I photographed in Holland. Obviously a corvid of some sort, and probably immature, but what is it? The best guess, courtesy of one of my twitter responders, is that it's a leucistic jackdaw, but I've yet to see a really persuasive photo of a similar bird. It was also suggested that it might be an immature hooded crow, but in my 20-plus years of living in and visiting the Netherlands, I never saw a hooded. In fact the first time I did see one, in either Finland or Sweden, I did a double take because it was (to me) such an unfamiliar species.
Posted by Al R at 02:05 6 comments:

On the admittedly slight chance that you're already working at ESA/ESTEC in Holland, I'll be doing a talk tomorrow: