There are of course classes of technology that don't change very rapidly, like furniture, houses, common tools and simple appliances, as well as cheap, mass-produced consumer goods like biros and paperclips. But actual branded models of things, such as makes of cars, are perceived to have woefully short lifespans. This is something that SF seems to accept unquestioningly, with a few notable exceptions. An SF novel set 50 years in the future might refer to a "Jeep" or a "BMW" but it's implicitly not the same Jeeps or BMWs we know today - unless the author makes a point about the protagonist being a classic car enthusiast, with his lovingly tended period roadster from 2011. Bladerunner, which got so much else right, was also one of the first films to show a future in which old stuff was still hanging around - although with the fish-tailed cars, it was strangely stuff that was already quite elderly at the time the film was made. 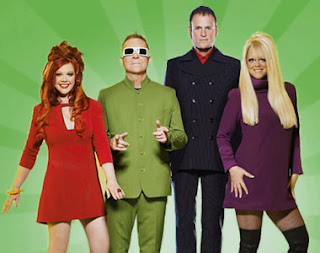 As we slide into the second decade of the 21st century, though, it's interesting to take stock of things that not only haven't changed radically in the last few decades, but show every sign of sticking around for a few more. I'll restrict myself to two examples, both from the world of aviation. The B52 is now a very old design indeed. It's been in operational service since 1956, flying since 1952, and the program dates back to 1948. The "youngest" B52s now flying are a mere half a century old. What's interesting, to me at least, is that there is no reason for them not to keep flying for much, much longer - possibly until the middle years of this century. Granted, the operational B52s have had various bits swapped and improved over their service lives, and may yet see more changes - but they'll still be B52s, and recognisable as such to anyone who witnessed the birth of the program six decades ago.

The other example is the 747 - now well into its fifth decade - and they're still building them. Granted, the 747s we see flying around today, or perhaps even fly in ourselves, do not date back to the 1960s. But, stretched and modified as they are, they are recognisably the same machines. By the same token, passenger or freight 747s will still be flying somewhere in the world decades from now, even if they aren't the dominant long-haul carriers that is now the case.

It would have been a brave SF writer who wrote a book in 1970, set in 2020, in which people were still flying around in 747s and in which a major element of the USA's bomber capability was still vested in B52s. But did anyone get it right, I wonder? Are there SF novels that correctly nailed the fact that, while lots of other things change, some major technologies just stick around?

And are there any other examples of very long lived, familiar technologies that ought to be part of the background furniture of any SF novel set in the mid 21st century?
Posted by Al R at 07:58