A few weeks ago I was browsing a second hand book shop in Brecon when my eye chanced upon this:

It wasn't too expensive and the hardcover was in pretty good condition, so I snapped it up. But who remembers The Trigan Empire? Not many of you, I'm willing to bet. For a start, you probably had to be a Brit, and not only that but a Brit growing up in the sixties/seventies. For me, though, The Trigan Empire was very much part of my induction into the world of SF - although I came to it by rather roundabout means. 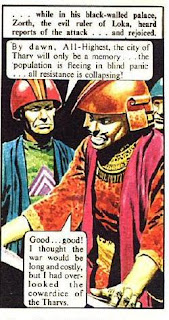 The Trigan Empire was a comic strip running in the children's magazine "Look and Learn" between 1966 and 1982, although (according to Wikipedia) it actually commenced in Ranger in 1965, before Ranger was swallowed up by Look and Learn. Magazines and comics swallowing each other up was very much part of the texture of British publishing then, and probably still would be, if there was a magazine and comics industry worth speaking of. Stephen Baxter has just done a very good overview of the insanely complex history of Eagle magazine in the most recent issue of Vector, but no comic was immune to these factors. My own experience of the process came via the swallowing up of "Speed & Power" magazine, which my parents had been buying me from issue one. Here's a typical S&P cover nabbed from the internet: 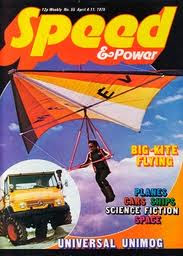 Speed & Power was great, especially if you were eight and almost insanely obsessed with machinery and technology. More particularly - as I've mentioned elsewhere - it did me the singular service of reprinting classic Arthur C Clarke and Isaac Asimov short stories, which was pretty much my portal to the world of written science fiction. I still own every issue. Speed & Power, though, was obviously not a big commercial success and alas it was eventually doomed to be swallowed up by Look And Learn in November 1975. 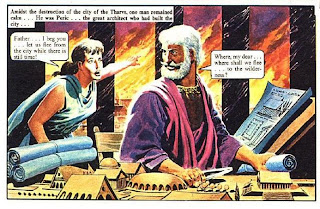 I didn't much care for Look And Learn, if I'm going to be honest, and bitterly resented the way "my" mag had been reduced to a miserably small logo on the new masthead. Plus, there was lots of stuff in Look And Learn that didn't particularly rock my nine year old world. Stuff about the Bible, stuff about history, lions, kings and queens - all deeply boring, in my considered opinion. I wanted stuff about aircraft carriers, tanks, lasers, sci-fi, not all this boy's own all the world's knowledge rounded education type nonsense. Nonetheless, there was one rather fantastic thing about Look And Learn, and that was The Trigan Empire. I loved it immediately, if only because it offered the one piece of recognisable sci-fi amid all the improving, educational dross I detested.

The Trigan Empire was great for several reasons. Firstly, it was beautifully illustrated - the artist, Don Lawrence (who drew the strip until 1976) had a fantastic eye for scenery, figures and technology, and the use of colour was tremendous. The stories were also easy for me to get my nine year old head around - there was a sense of history behind the strip (it had been running for ten years) but it wasn't hard to get up to speed. Best of all, though, it was proper sci-fi, albeit of a somewhat unusual kind. The strips looked like retellings of Bible stories, except that the various characters and tribes also had access to advanced weaponry and nuclear-powered aircraft. I cropped a couple of frames from internet pages, which I hope constitute fair use in the context of this post.

As the Wikipedia entry puts it:

"The fledgling Trigan nation is established under the leadership of Trigo, with the trappings of a Romanesque civilization with swords, lances and Roman-style clothing, but with high tech ray guns, atmosphere crafts and high-tech navy. In a later story, they create a rocketship in months to fly to one of Elekton's moons. Several of the other civilizations show a blend of low tech and high tech."

It was SF, though. In the first strip, which is reprinted in the volume I found in Brecon, we learn that the action takes place on a planet in a different solar system, inhabited by 12 foot tall humanoids. In fact these humanoids are now extinct: the entire history of The Trigan Empire has been translated by a human researcher, based on documents recovered from a crashed Trigan spacecraft. It all happened long, long ago, lending the whole thing the heft of legend. Nothing overtly fantastical happens in the strips; everything is rationalised. Indeed, one of the main characters, the immensely old and bearded Peric, is a scientist figure. As such, it sits squarely in the tradition of Dan Dare, that other great British SF comic series of the immediate postwar decades.

It's all hideously old-fashioned, of course, from the "typeface" lettering in the speech bubbles, to the resolutely non-PC depiction of women and people of colour in the various adventures. The heroes - Trigo and his mates - are all blonde, square-jawed and muscular; the adversaries are generally dark-skinned, Mongolian-looking baddies. Women exist mainly to scream or scheme. It's futile to complain about these things now, though - I doubt that The Trigan Empire was any more sexist and racist than any other comic strip dating from the same period. What's not in doubt is that by the time I came aboard, the days of Look And Learn - and by extension The Trigan Empire - were already numbered. In punk terms, with its meticulously rendered artwork, sensible plotlines and stoic fifties worldview, it was like Emerson Lake and Palmer versus the snot-nosed Sex Pistols of 2000AD. It couldn't last, and it didn't. But since I threw out all my Look And Learns, I'm very glad to have at least this small part of my past back with me again, and if the stories now seem quaint, Don Lawrence's artwork remains as marvellous as ever. 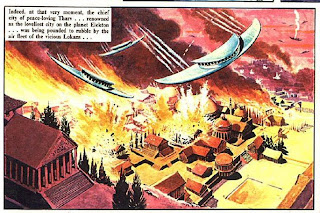 In other news, I'm delighted to report that my story "The Fixation" won the Sidewise award for best short form alternate history - many thanks to the judges for selecting my piece, and commiserations to the other shortlisted authors. Chuffed to bits about that, me.
Posted by Al R at 06:21