It's Star Trek Day apparently, so by way of minor celebration, here's a nearly completed model of Galileo, from The Original Series. 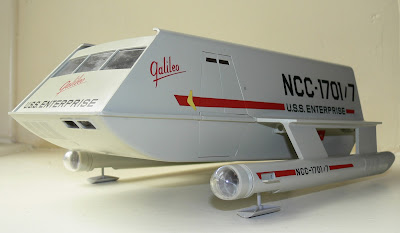 The shuttlecraft was one of my favorite SF designs, standing out even though it featured in relatively few episodes. I like the utilitarian, non-aggressive look and the way it echoes some of the design features of the larger Enterprise, suggesting a common technology.

The first model kit of any type that I owned was the AMT Enterprise, largely built by my dad and later broken (by me).  AMT had gained the rights to produce the kit before the original series aired, via a strange deal that saw them producing the prop and miniatures for the shuttlecraft to be used in filming. AMT made one full-size shuttlecraft which still exists, albeit after extensive restoration. Weirdly, to me, AMT didn't release their own kit of the shuttlecraft until 1974, half a decade after Star Trek's initial run. I don't ever remember seeing one in the shops, although I had the AMT Klingon cruiser (broken by me) and the Spock diorama (also broken by me - can you see a pattern here?).

This new kit is from Polar Lights and was released in 2020. It purports to be the most accurate rendition of the shuttlecraft and I've no reason to argue with that. It lacks any interior detail but that's not too obvious once the model is finished as not much light gets in. Mine went together quite easily although I did have to use a bit of filler here and there to get the seamless look of the studio model. I sprayed it using Ford Dove Grey and it looks about right. The decals are excellent but the absence of panel lines and so on makes it a bit tricky to get them aligned.

My model came from Antics:

And here's a fun video about the restoration of the original prop: