While I crack on with the March issue of Asimovs, here's a brief mention of the fantastic new album by Public Service Broadcasting: 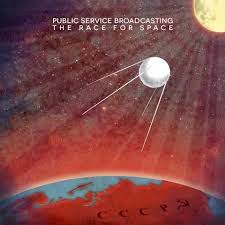 PSB are a pseudonymous duo based in London who play mostly instrumental music, assembling their pieces around historical voice samples, sound effects and so on. The Race for Space is their second album and in broad terms tells the story between Sputnik and Apollo 17, drawing heavily on NASA and British Film Institute archival material. All well and good; the music is inventive and varied, but the results could so easily have been glib, with the samples simply used to create a superficial sheen of space-age atmosphere, but it's far from that. The whole thing is assembled with meticulous care, almost a reverence, and a real respect for the grand narrative of the space program and the very human individuals who made it happen. It's hard to pick a favorite, but I'm very taken with "Gagarin", a driving funk workout which manages to celebrate both the heroism of the first man in space, and also hint at the sadness of his early death. "Go" is also splendid, with its recordings of Gene "failure is not an option" Kranz doing the rounds of the Apollo 11 flight controllers, asking each to give a go or no-go response.  But the whole thing is worth cherishing. It's a superbly inventive, uplifting piece of work.