I anticipated that I might struggle to keep up with these Asimov's reviews, and so it has proved, but nonetheless I do hope to keep doing them throughout the year, even if the lag between issue and review stretches ever further. 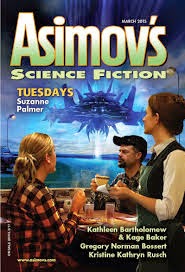 In these puppy-benighted times, it's good to return to Asimov's and be reminded that there have been, and continue to be, generations of SF writers quietly content to write the best SF they can, year after year, with no particular complaint or sense of outrage that "their" brand of SF isn't the one currently finding favour with the Hugo voters, or that they are somehow being excluded from glory by some imaginary cabal of "Social Justice Warriors".

Due to an unfortunate production error, the lead story - Suzanne Palmer's "Tuesdays" - suffered from having its first page missing from the print version of the magazine. All sympathy to those involved, and thanks to editor Sheila Williams for kindly supplying me with a PDF of the whole story. This is the kind of mistake that's bound to happen when you put out a magazine month after month, for year after year, and the wonder is that something similar didn't happen decades earlier. It's worth reading the entire story, though, as "Tuesdays" is a cleverly told piece which attempts something interesting with structure, beind told through a mosaic of fractured points-of-view, skipping around in time while commenting obliquely on the events surrounding an out-of-the-way diner not too far from a certain place in New Mexico where something may or may not have happened in 1947. I've quibbled about multiple points of view in the short format before, and I will again (see my thoughts on the final story in this issue) but "Tuesdays" gets away with it because the structural decisions are fully integral to the aims of the story, not simply bolted on to make the plot work. It's a good piece with a lovely payoff, and I'll be keeping my eye out for more work by Suzanne Palmer.

Kage Baker had a relatively brief SF career, spanning less than thirteen years between 1997 until her untimely death in 2010. In that time she achieved great popularity within the field, most notably for her Company stories. It takes some doing to say something new about time-travel - or at least give the impression of freshness, which is much the same thing - but Kage managed that, and the Company stories were justly celebrated. Now her sister Kathleen Bartholomew  is developing further Company stories based on the notes left by Kage, as well as the many conversations they shared over forty years. "Pareidolia" is an ingenious fable about the unintended consequence of good intentions, and - fittingly, for a time travel piece - its action spans the entire period from ancient Egypt up until the sixth century, with of course hints of data and communications to and from the future. It's an enjoyable piece, with a sustained and effective use of voice, dense with period detail, and it gets into some clever territory concerning visual perception and what can be best be described as "mind viruses". The central conceit, of an image that hacks the nervous system directly, reminded me a little of David Langford's Basilisk stories, but that's only a passing similarity.

If I had one lingering reservation, it would be that the story lacks a certain swerve or complication which might have been expected - it sort of proceeds smoothly from A to C via B, but it would have been nice if D had shown up. Perhaps the resolution is just a little too straightforward for the time travelling protagonist, with not enough difficulty or jeopardy involved. But that's a small complaint, and it's fine to see the legacy of Kage Baker being continued in such capable terms.

Kit Reed has been publishing SF since 1958, all over the genre map, and often somewhere off the edge off it. The sheer longevity of SF careers is something to be celebrated, I think, especially when writers like Reed, in their seventh decade of publication, are still capable of coming up something as incisive and affecting as "Military Secrets". It's a parable about loss - or more precisely about the limbo of those children whose fathers go missing in war, and who therefore are denied the bitter comfort of closure that a confirmed death would offer. These children are on an endless nightmarish bus ride, trapped in a kind of driverless tube, doubting that they will ever leave - they envy those children who at least know where and when their parents were killed, and who are allowed off the bus. It's a short piece, but no less powerful for that.

There's a thesis waiting to be written - not by me - on the pernicious influence of Joss Whedon on an entire generation of younger writers. With its tough-as-nails laconic space crew trading stories around a bar - some true, some lies, everyone with a human-interest backstory - I got a distinctly Whedonesque vibe from "Twelve and Tag", the novella by Gregory Norman Bossert. Perhaps it's just me, but I could easily have visualised this story as an extended episode of Firefly, or something similar. There's something about the dialogue, a certain quality of forced snappiness ... Apologies to Bossert if there is no Whedon influence, of course. Such grumbles aside, though, it's a nicely drawn piece which successfully conveys the impression of a grittily complex mid-term future, in which the outer solar system is being ruthlessly plundered for its economic worth. It doesn't really strike any new ground - Tiptree and Delany pretty much nailed this spacegrit mode forty-plus years ago, and over the last decade we've seen plenty of SF works explore the colonisation and exploitation of the solar system, but it's still enjoyably done.

"Holding the Ghosts" by Gwendolyn Clare starts out with a confusingly vague point of view, and then compounds things by scene-shifting into a different one on the second page. But it quickly becomes clear that these shifts serve a purpose, and the apparent vagueness of the opening paragraphs is in fact pin-sharp given the theme of the story, which is about multiple personalities inhabiting the same brain-dead body. It's the near-ish future and there's a process which enables scanned personalities to be uploaded into the neural matrix of surrogate bodies damaged at birth due to a medical error. There's a glitch with the technology, though, so that each personality leaves an impression of itself which hangs around when the next one is in control of the body. Pretty soon these "ghosts" start colluding with each other. There's nothing radical about the telling here - other than the "body" being the only constant viewpoint, the story's told in pretty conventional past-tense relaxed-prose SF terms - but it's effectively done nonetheless, and occasionally hits some high notes:

"One morning she sat up in bed, wide awake, as if the paling eastern sky spoke to her loud as an alarm clock."

The longest piece in the issue, and the only novella, is Kristine Kathryn Rusch's "Inhuman Garbage". It's a kind of CSI-type police procedural, set on the Moon in the future, and concerning itself with Lunar politics and cloning. It's another smoothly written piece, one that never loses the reader, but at the same time I confess that I didn't find it tremendously engrossing. There's a murder, and we're introduced to a set of protagonists, and we get some sense of the wider Lunar society and its mores. But there's a matter of fact flatness to the telling, a lack of ambition in the language, a paucity of invention, that left me feeling that I was reading something that had been written without any particular investment at the level of style.

"Ethan Brodeur looked at the information pouring across his screen, and let out a sigh of relief. The hardening poison wasn't one of those that could leach through the skin. He still had to test the compound to see if the poison had contaminated it, but he doubted that."

This is SF prose at the default setting; it gets the job done and in any context a few lines like this are no problem at all, but a whole novella told in such flat, affectless terms becomes quite grey and uninvolving - and that's largely what we get; there is no striking imagery, no really inventive use of language, no attempt to make us see and feel what living on a Lunar colony would really be like, given that we've all read such settings many times over. It's certainly not a piece that's going to leave you reeling with future shock, the way the cyberpunks tried to cram at least one eyeball-kick into every paragraph.

It's also told using the familiar structural conventions of the modern thriller novel, or indeed the modern detective TV show format, with the viewpoint shifting around as it needs to, rather than being kept tightly on one protagonist. Brodeur, the character described above, is merely a forensics specialist, rather than the main detective or the primary antagonist. Perhaps I'm too much of a purist, but (as I've mentioned in the earlier reviews) I'm always a little uneasy with viewpoint shifts within the context of short fiction, even in a longer piece like a novella. It's also worth mentioning that the telling is extremely leisurely - it takes six whole pages just to detail the initial crime and the on-scene interview. Because it's part of a larger series, too - I'm unfamiliar with the other stories and novels - we keep getting bumped out of context to be fed extraneous little asides about the functioning of the wider world and its legal and economic apparatus. Whose benefit are these info-nuggets for? Not the main characters, who are already embedded in this world.

In fairness I should probably add that while I went through a phase of my life where I gobbled up police procedurals and crime thrillers like they were going out of business, I'm no longer as fascinated by the form as I once was. So an SF version of a police procedural is going to have to work really hard to hold my interest. But - on the plus side - this is unambiguously SF, of a rather hard nature - all the technical details ring true, and feel well researched - and it never wrong-foots the reader.

(edited for minor spelling mistakes and typos)
Posted by Al R at 04:21