Feeling the need for some space-based entertainment I caved in and bought the DVD of Ender's Game. I had not seen the film when it was released, and have read neither the Orson Scott Card novel nor the original, much-praised short story from which it was expanded. That said, it is impossible to exist in the SF world and not pick up the gist of the plot by osmosis. I had also read the sequel, Speaker to the Dead, during my student years, and rather enjoyed it at the time, although I don't recall how much of the first book is recapitulated in that novel. 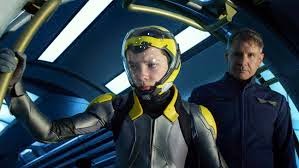 The film is no fun at all, although like all modern SF productions, the effects are beyond reproach. But it's dull, sterile, uninvolving, digitally flat - a simulation of a simulation.There is no context for any of the characters, no sense of why Ender came to be of significance to the world government, no sense of why he got the way he is, no sense of how his sister Valentine fits into the scheme - she's just there, and then absent for most of the film, until required again for plot stuff in the final reel. When Ender is scooped up into space and sent for training exercises in a giant orbital station, there's no jeopardy, no sense of impending threat, no intimation that anything bad might happen to any of the characters. The weightless combat scenes are slow, stiff, unengaging, and even when Ender and his team of young warriors aren't rendered digitally, their skintight silver outfits and body armour make them look like unconvincingly rendered CGI mannequins. These kids have been catapulted into space and forced into a strict military command structure, so they ought to feel freaked out and terrified, but the environment is entirely too pristine for us to feel that the kids are ever in danger. It's like a fight scene staged in the ELO space station.

Worse than that, though, is that the film can't resolve the major narrative thorn of the source material. Ender is being lied to - the battle simulations he's called on to direct (at least the later ones) aren't simulations at all, but realtime combat scenarios, enacted by crewed ships and drones under Ender's direct and indirect command. As SF fans, we probably know this - but the filmmakers are addressing a wider audience, and must have presumed that the majority of viewers would take the presented action at face value, as understood by Ender. That's a problem, though, because we're then faced with a film that mostly consists of kids playing computer games, except that they go up a level each time. When the big reveal happens, it's too late in the film to save the day - we've already tuned out. Worse, the additional game sequences in the film - Ender exploring a fantasy environment, which turns out to contain clues that will play a part in the resolution - look awfully crude. And we're not just watching Ender play the fantasy game - we're immersed in it, as if seeing things through Ender's eyes.

An alternative strategy might have been to let the viewer in on the fact that the simulations are "real", and then play with the dramatic irony inherent in Ender's continued naivety. But other than a hint or two, that's not the way the film chooses to go, and in any case it's hard to see how telling the story from the point of view of the "adult" battle planners would have been much more successful.

Fatally, when Ender does discover that he's been lied to, his reaction doesn't ring true at all. He's shocked to the core of his being by learning that he's been duped, and has just enabled the genocide of the aliens. But only a moment or two earlier, he was perfectly content to run through combat simulations using a doomsday weapon that could only ever be viewed as a direct rehearsal for exactly that genocide. So what exactly was your problem, Mr Wiggins?