Following my review of the January issue of Asimov's SF:

Let's have a look at the fiction in the February issue. 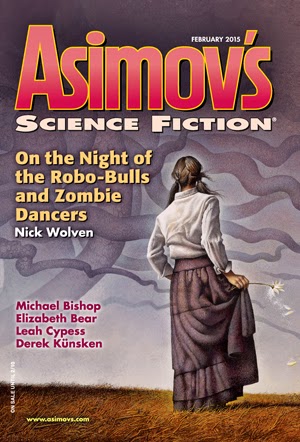 I was pleased to see a Michael Bishop novelette as the first piece in this issue. "Rattlesnakes and Men" has a characteristically well evoked Southern setting. Wylene, Reed and their daughter Celeste, made homeless after a tornado hits their town in Arkansas, hitch a trailer to their pick-up, load up their belongings, and drive to Georgia. There's a chance of employment for Reed, following up on an old Army contact (the splendidly named Dusty Shallowpit), and the narrator of the piece - Wylene - will be able to take on various jobs including tour guide at a local wildlife refuge. So far so straightforward - we're clearly in something like the present day, at least given the evidence at hand. Things soon take a surreal turn, though. On being welcomed into their new community, Wylene's family are granted a gift they can't very easily refuse: a rattlesnake, which they're meant to keep inside their new home. In fact rattlesnakes turn out to be a very big deal in this new community, to the extent that men wear them as accessories, carry them in little holsters and so on. Pretty quickly we clue up to the fact that rattlesnakes are supplanting the role of guns, and in fact as we read on so we deduce that firearms simply do not exist in this world, and that wars and military actions still involve bows and arrows. It's a patently ludicrous set-up, but Bishop treats it with absolute conviction (the domestic rattlesnakes, which function like guard dogs, are the product of genetic engineering) and in its way no more ludicrous than rampant gun ownership in our own world. Bishop has a story to tell here, more than just presenting a funhouse reversal of our own norms, and this biting, witty, thoughtful piece, drenched in Southern summer heat, leaves us with a lot to think about.

Derek Kunsken provides the second story, a clever take on generational hauntings. Brian, our protagonist, can't shake the ghost of Paolo, a dead paleobiologist who likes to whisper things like "Eumelanin is inferred to have been present in the eyes of ancient fishes by the trace metals found in fossils." Paolo is harmless - his whispering and scratching no more than a nuisance. The catch is that Paolo used to haunt Brian's aunt, and has only now latched onto her nephew. Brian's girlfriend Vanessa doesn't care for having Paolo around, though, and urges Brian to get it sorted. Ghosts, it turns out, lock onto inherited patterns in DNA, which is why Paolo is now fixated on Brian. But with that comes the possibility of exorcism via sophisticated gene therapy. Kunsken doesn't just gloss over this - he tells us how it might be done, with convincing talk of gene expression, receptors, proviruses and so on. It's a slickly written story throughout, and a fresh examination of an old trope.

Reading these first two stories, the Bishop and the Kunsken, I was struck by the inherent novelty of their central premises. We often hear that there are no new ideas in SF, but what are the odds that anyone has ever written a story in which rattlesnakes take the role of guns, or in which targetted gene therapy is used to rid hauntings? SF's ideas mine is an infinitely renewable resource. We're nowhere near Peak Idea.

Onto Elizabeth Bear next, with the issue's second novelette, "No Decent Patrimony". It's the first straight-down-the-line piece of extrapolative SF, being set in our world, in the future, and concerning itself with the social impacts of a radically disruptive technology, in this case life-extension technology. Structurally, it's quite a simple piece, with much less foreground action going on than you might otherwise expect for a relatively long story. The narrator, Edward, has just lost his father in a vehicle accident - we're clued in early on to suspect that the fuel-cell explosion was anything but an accident - and must now face up to life in a world no longer dominated by the presence of his immortal forebear. It turns out Edward's father was one of the early investors in the biotech firm which produced the immortality treatment, and Edward himself is now fabulously wealthy. But this is no utopia of immortality for all. The technology is strictly controlled, and since the ruling elite now get to run things for centuries, change will only happen slowly, if at all.

Edward was hurt in the accident that killed his father, but after five days in hospital, he's ready to return home. Marna, the family's counsel, takes Edward back to their grand mansion in New England. When they get there, though, there's a reporter waiting for a scoop. Edward reluctantly consents to give an interview, and in the ensuing exchange we get a larger sense of this world and its background. I said that not a lot happens, but that's actually to the story's benefit, rather than its detriment. Bear takes her time to set the scene, conveying a pin-sharp evocation of this climate-disrupted future, lingering over the details of the house and its furnishings, the drowsy heat, the summer light. We wouldn't get a sense of changelessness, stasis, without this additional context. Too many SF stories devolve into little more extended dialogue exchanges, chewing over this or that social, philosophical or technological issue. While these diagrammatic exercises seem very popular when the awards come round, Bear's story reminds us that there's more than that to effective fiction.

Reading this piece, I was struck by the sense - which I think has also been articulated by Gardner Dozois - that we're starting to see the emergence of what you might call the "New Default Future". Bear's world is one of vanishing privacy, information for all, continued social inequality, climate change as a given, radical lifestyle changes effected by new biotechnology. You can tweak the parameters a bit, but it does seem as if writers are once again beginning to converge on a shared sense of the future. No, it doesn't necessarily involve space colonies or rolling roads or flying cars, but it's no less valid, no less fascinating.

"Red Legacy" by Eneasz Brodski is the one story in the issue that really tries to do anything interesting with form. In the review of the January issue, I spoke about the hazards of viewpoint shift, especially if it only comes about because the writer couldn't find any other way to round off a story. Brodski's piece shifts from first to third person and back to first, but in this case the viewpoint modulation is structurally integrated, as if the form dictated the content, rather than the other way around. That said, it's debatable if the viewpoint shifts actually add anything beyond a minor variation in tone. It's the Cold War, and we're in a Soviet research compound about to be infiltrated by a smooth-talking Western agent with a penchant for the Walter PPK. Brodski's central idea is that Lamarckism theory of acquired characteristics is valid, and (in a nice turn) deemed to be morally superior to the decadant Western adherence to "capitalist" Darwinism. In the compound, Marya is working with Lamarkian principles to create a bacterial agent which will provide humans with resistance to radiation. But there's also something else going on ...

There's a certain coldness to this piece which may be deliberate - it's hard to get really invested in anything that goes on - but there's plenty of ambition here, and the writing is never less than solid. Oddly enough, it's only the second piece of SF I can think of which treated Lamarck's ideas as valid, and both had "Legacy" in the title.

"Forgiveness" by Leah Cypess is another short story, and - like "No Decent Patrimony" - it takes a good hard look at the social consequences of a plausible new biotechnology. Not life-extension, in this case, but a neural technology which enables transgressors to be returned to society, safe in the knowledge that they won't be able to commit the particular crime that got them into trouble in the first place. Anna, our narrator, is in a relationship with an abusive boyfriend, Michael, who has left bruises on her arm. Michael had just come back into her life after being treated, given a neural chip rather than jail time. Cypess's story is another of those highschool, juvenile-viewpoint pieces that I complained about last time, but in fairness, it's a nicely told piece that demands the youthfulness of its protagonists to frame the ethical issues as cleanly as it does. Michael is all contrition and repentance - but what does that mean, if the implant means he's no longer in control of his impulses? And what would Anna's forgiveness mean, in that context? What sory of forgiveness has Michael actually earned? There's nothing groundbreaking in the telling here, but it's an effective little piece nonetheless.

Onto the longest and last story in the issue, the novella-length "On the Night of the Robo-Bulls and Zombie Dancers", by Nick Wolven. It's a terrible title, but the story itself is magnificent, one of the best I've read in quite a while. It's a kind of Conradian Heart of Darkness/Apocalypse Now-type quest to make contact with a reclusive, Colonal Kurtzian figure, one Ribbeck. The catch is that Ribbeck is a famed financial analyst, the only person who may be able to understand what sort of event the "AI quants" - the stock market's predictive supercomputers - are beginning to hint may be coming down the line. The protagonist is Gabriel Boateng, trader for Kappalytics, a firm in Downtown Manhattan. Chiding him for being late back from lunch, Gabriel's boss assigns him the task of going uptown in an attempt to get some sense out of Ribbeck. To do that, Gabriel will need to brave nighttime New York. It turns out that, quite literally, this is the City That Never Sleeps. In fact no one sleeps, ever. The biotech innovation in this society - which again plays quite nicely as a slice of the New Default Future - is a pill that banishes sleep. But I don't want to spoil the fun too much, other than to say that Gabriel's journey to Ribbeck is a tour de force of sustained, high-energy invention, and some quite phenomenal writing.

At night, the streets in this area glowed with Roman-candle light. Pothole bonfires, mulitcoloured chemical torches, the lambent reflections of firelit windows, all filled Broadway from dusk to dawn with a wavering glare. In this ever-spirited sector of the city, the acolytes of libertine self-investigation had leased the dark territory of the night for experiments with personal release that year by year grew steadily weirder. Was it boredom, Gabriel wondered, the tug of the Moon, some lupercalian dream lurking in darkness itself? Wickermen on the tenement rooftops went up nightly in whuffling flame; masked figures moved through the steps of obscene dances; drugs, illegal or legal, circulated through the alleys like scurrilous words; gluttons fed to the point of purgation on street-food feasts. In the Village, promiscuity wasn't just a liberty. It was the law.

All of this is merely the prelude to Gabriel's ultimate, harrowing encounter with the dementedly sane Ribbeck. This is a dark masterpiece of a story.