Yesterday I sent Blue Remembered Earth back to my publisher, after a substantial round of general cutting and tightening. The draft I submitted in December was 212,000 words; yesterday's was a much leaner 177,000. That's still a big book, of course, but it's comfortably shorter than anything I've done to date. 35,000 words, the difference between the two drafts, is about 100 pages of print, so we're talking about quite a substantial chunk of deleted material. It's never that simple, though, since part of the rewrite also involved adding and amplifying stuff - so the number of words dropped from the original draft is actually a bit more than 35,000.

How do you go about losing that much wordage from a finished text? Stephen King, if I remember correctly, advocated the cutting of 10% between first and second drafts, which has always struck me as basically sound advice. I've gone further than that with some of my books and stories, sometimes much further, but there's always a point where you're cutting too much, beginning to damage the narrative flow with jerky transitions, over-short chapters, too-snappy dialogue and so on. Brevity is a virtue, but we've all experienced books and films which feel over-edited, over-curtailed. There's an argument for ruthless self-editing, cutting and cutting until the text has been reduced to little more than a diagram of itself - but take that to its logical conclusion and there'd be no point in writing novels at all; we'd just skip to the synopsis. Books depend for their effect on contrast - a book that was all tightly-written action, or all cut-to-the-bone dialogue, would be as wearying as one that consisted of nothing but long, descriptive passages. But when you're knee-deep in the writing, it can be hard to take a step back and identify the necessary modal shifts of tone and pace that need to be there. Writers usually learn to make scenes do double or triple duty, so by the time you're editing a book, it can be difficult to delete a scene without damaging something else. That thousand words of introspection in chapter eight may look like a prime candidate for deletion when you're under the gun and looking for something to cut, but if it establishes key information that absolutely has to be in place by the time the reader gets to chapter twelve, it may have to remain.

Anyway - job done. Book off to publisher - though we're not done with editing just yet.

Taking a break from work on BRE, I also finished and sold a new story. "Trauma Pod", a sick and twisted piece about near-future battlefield medicine, will appear in ARMORED, a Baen books anthology edited by John Joseph Adams. Not sure of the pub date of ARMORED, but I'm guessing 2012 is more likely than 2011.

I should also mention that VOICES FROM THE PAST is now available, so if you'd like to contribute to a worthy cause - the Great Ormond Street Children's Hospital - get on over and purchase your copy. The ebook contains my story "Ascension Day".

Finally (sort of), thanks for the kind words on my Hugo nomination for "Troika". I try to keep these things in perspective but 22 years after my first pro sale, I'd be lying if I said I wasn't very, very pleased to have made the Hugo ballot. Even if it never happens again, I'm enjoying the moment. And I'm equally delighted that "Troika" is also on the Locus shortlist.

While we're on the subject, the Subterranean Press edition of "Troika" will be available before very long. I've signed the sig sheets, and I know they're back in the States. 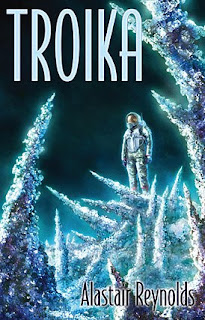