This is my current bedside reading: 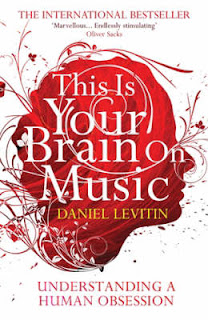 I'd had a glance at Daniel Levitin's book in a Boston bookstore last year, but for some reason hadn't bought it; I don't know why as this is exactly my kind of thing. Perhaps I was thinking about luggage allowance on my flight home. In the end I picked up a copy a few weeks ago in Cardiff, and it's very interesting stuff, both in the specifics of its theme - the science of music perception and appreciation, and as a handy primer on recent developments in neuroscience. Levitin is a scientist, but he's also a muso - if you've ever wanted a book that hops cheerfully from Mozart to Metallica by way of MRI, this is the one for you.

I've still some way to go, but last night I was struck by a section in the book where he talks at some length on the "ten thousand hour" thing. This is the notion, with which I was only glancingly familiar, that it takes about ten thousand hours to get good at anything - by which good is taken to mean "expert" or "world class". In the case of Mozart, for instance, there's no need to assume that there was anything exceptional or freakish about the young Amadeus - he was simply brought up in a household environment where the necessary ten thousand hours of tuition and practise could easily have been achieved at a relatively early age. Levitin stresses that the ten thousand hours applies to far more than just music.

This got me thinking about my own long-documented struggles with the guitar, and how much time I'd need to put in to get near that magic ten thousand mark. Three hours a day for a decade will get you there, but very few of us can hope to spend that much time on what is essentially a hobby - not if we've got day-jobs or other interests. Nonetheless, and barring other factors, I suppose I could do it if I were so minded. An hour in the morning, an hour at noon, an hour in the evening - and then keep that up for ten years...

Well, no - that's obviously not going to happen. But then it occurred to me that I don't have to do ten thousand hours from now, since I've already been playing - or attempting to play - for more than fifteen years. That must knock quite a chunk off the target, surely?

Well, sort of - but not very much. I've been kind of semi-serious with my guitar for the last two or three years, but if I'm going to be honest, I doubt that I spent more than two hours a week on it for most of the time before that. So that's - what - a hundred hours a year, for a decade or so? In other words, and allowing for my increased discipline in the last couple of years, I doubt that I've managed to shave more than two thousand hours off the target. So that's just another eight thousand to go, then.