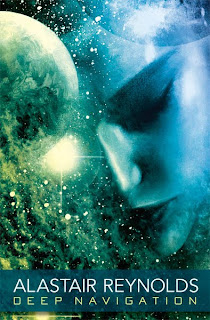 It's mid February, a month or so before the UK publication of TERMINAL WORLD. I'm in NYC, having come down by train after attending Boskone in (unsurprisingly) Boston, which was great - a brilliantly run and friendly convention that went by in a whirlwind, and still left me wanting more. As always there were people I looked forward to meeting who I barely got to speak to, if that, but that's the mark of a busy, jam-packed convention. And by the time I located my credit card with the intention of strolling around the dealer's room looking for goodies, they were already boxing up. Which is probably a good thing because my flight luggage was already heavy enough on the way out, and I've still got a few days to go.

I don't think I said anything about this on the old blog, but there's a new collection out. The NESFA press typically do a "Boskone book" for their guests of honour and this year it was my turn. I've been buying NESFA books for years and it's a blast to have one with my name on the cover - especially one as nice-looking as DEEP NAVIGATION. The contents, which run from my very first story to among my most recent ones, are as follows:


The gorgeous cover image is by John Picacio, who is also a genuinely nice guy and someone I did get to spend a little time with at Boskone, although not nearly enough. There's also a very generous introduction from that excellent gentleman, Stephen Baxter.

Ordering details here; the page currently says that they are not yet taking orders but the book was freely available at Boskone so I suspect that may be a little out of date:

The book is available in signed, slipcase editions (autographed by John and I) as well as the normal hardcover.

And I think that will do for my first post.