Can't buy a fear of music

Here are the records I picked up on my recent trip. As you'll see from the price stickers, some were bought in London (fopp) on the way back. I didn't go sniffing out record stores in the States, and the two I expected to find - the big Virgin on Times Square and the Harvard Record Exchange in Boston - were both long gone. I was also mindful of not bringing back too many items since, aside from customs regulations, our bags were already stuffed to the gills before we left. 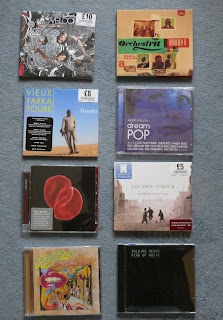 In amongst the newer stuff, there are a couple of older albums which are very special to me, and which I am only now buying on CD. I have never owned a vinyl copy of either of them. Steely Dan's Can't buy a Thrill (1972) was their first album, and the first one I bought, on a double cassette with Aja on the flipside. It's a New York album: they were an East Coast band at the time, although by the time of their big, immaculate breakout hits like Hey Nineteen and Babylon Sisters, they were far more strongly associated with LA. It's still one of my favorite albums of all time, although I could say the same about pretty much any Dan release. I bought it in 1985, shortly after journeying to Newcastle to start my degree studies. In my mind it's now indelibly associated with those first few months at university, along with the chart hits of the time - Grace Jones, Waterboys, and so on. I owned a record player, but did not take it with me to Newcastle so for a period many of my music purchases were on cassette. Later I found a few friends who were able to tape records for me so I switched back to vinyl, but that came later. As these were mainly goth/punk friends into Bauhaus, I had to endure their ridicule with my propensity for laid-back American rock. I was right, though.
In that same period I also bought Talking Head's Fear of Music, which is again a New York album, this time from 1979. To me, seven years isn't remotely enough time to account for the radical differences between these records. Can't Buy a Thrill, brilliant as it is, is an album that has the early seventies written through it like a stick of rock. It's jazzy, laid-back, borderline stoner - you could imagine the Dude listening it in between his Creedence tapes. Fear of Music looks and sounds like something from another century. Look how modern that artwork appears even now, how sleekly minimalist. Was there any period of music more convulsive than the interval between these two records?
Anyway, here are my two trusty cassettes from 1985 - they both survived the big Fenham flat burglary of 1987, you'll be gratified to hear, although much of my tape collection didn't -  along with the two CDs I bought last week. 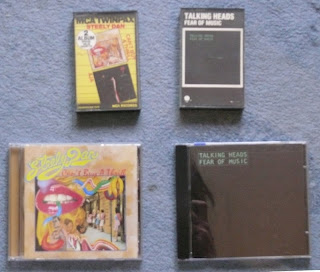