Here in Wales, lockdown continues - our devolved government has, along with Scotland and Northern Ireland, taken a more cautious approach than Westminster to relaxing the restrictions, and I think wisely so.

Through all this, I've been fortunate to be in a position of self-employment where my day-to-day routine hasn't been greatly affected by Covid-19. My daily routine remains about the same. I'm not at my most productive, and I'm conscious of that, but I'm getting things done slowly but surely. Where things have changed is that the lockdown has eroded the familiar landmarks which define the week, and which to a degree set my tempo for working. It must be said that this is an exceedingly minor inconvenience set against financial worries, issues of mental health, domestic strains and so on which many have experienced, and continue to do so. I am very lucky to be a writer, even luckier to be able to spend lockdown surrounded by countryside.

Have there been positives to the lockdown period? Judging by the newspaper articles I read, many people have reported a growing sense of re-engagement with the natural world; hardly surprising given that for once we can start to hear birds and mammals ahove the perpetual drone of cars and aeroplanes. The night skies have often been clear, too: coincidence or not that that I saw the Milky Way very clearly a few weeks ago, something hardly ever possible from our house before? Some of us will have probably read more books, or finished more jigsaws, than we might ordinarily have. For my wife and I, there's been a surprising twist, partly occasioned by lockdown, but it's a story that actually began a few weeks earlier.

We found a bat: 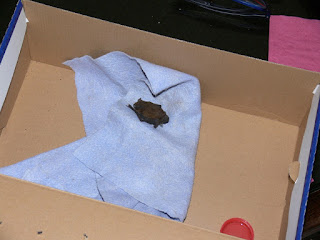 It had got into our house (we presumed) when some windows were left open for airing, and then ended up confined. How long it had been there before we found it was uncertain, but whatever the case the bat was weak and underweight. Following handling guidelines from the Bat Conservation Trust, the little chap was caught (not difficult since he was all but immobile) and safeguarded for transport. After making contact with the nearest suitable rescue facility, the Gower Bird Hospital near Swansea, we made what would turn out to be our last trip out of town.

I can't praise the staff at the Gower Bird Hospital highly enough. They took in the bat and carried out an immediate assessment, identifying him as a male soprano pipistrelle weighing just a bit over 3 grams. The plan then was to give him a chance to recover some weight and strength, and then - ideally - bring him back to our area for release. That all changed with the lockdown, though, and after some consideration (and given that there was a well-established population of pipistrelles near the hospital) the decision was taken to release him there, where he was expected to integrate well with the locals. It took quite a few weeks for him to be strong enough to fly.

I suppose I'd always had a distant admiration for bats, without knowing much more than that there were several species in the UK, and that some of these populations were endangered - much the same story for anyone with an interest in any particular class of wildlife. Given the chance, I'll happily go out around twilight and watch a bat or two, but until lately it had never really been with anything other than a passing interest.

A second bat-related event then followed a short way into the lockdown - call it the tipping point, if you will. At around 3pm on a warm, breezy day we spied a bat circling endlessly over and around a stretch of wooded road that is normally busy, but had now become pleasingly free of traffic. I'd certainly never seen a bat in the middle of the afternoon, anywhere in the world, and this one was not just active but spectacularly easy to observe, with coloration and shape being very prominent against the blue skies. All this chimed with reports I'd read in the paper about wildlife beginning to recolonise urban and semi-urban spaces in the wake of the lockdown, and adopting unusual (to us) behaviour patterns. I wonder if there was more to it than that, though. Some trees had recently been felled by Network Rail so perhaps the bat's usual habitat had been disturbed. Or perhaps, the bat was just happy to be able to loop around and around a bit of shady territory that must be a good insect trap and which is normally too hectic for good hunting?

Whatever the case, this second bat encounter started pushing me toward more active observation of the bats in our area, so my wife and I began to get into the habit of sitting outside around dusk and observing the activity - if there was any. It turns out that bats don't come out and play like clockwork - who knew? Well, bat people probably. In the meantime there was still much to enjoy such as regular close encounters with a tawny owl, who has developed a fondness for our chimney. 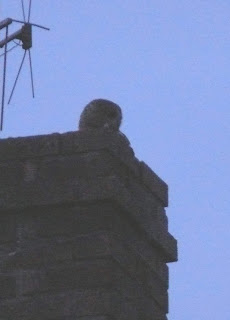 To take my bat interest up a notch, though, I decided to invest in a bat detector. I'd been aware of such devices but not how they functioned or what the possibilities were. After doing some research, we settled on a superheterodyne detector - basically the entry-level type of detector and the easiest to use for a complete beginner.

Following a link on the Bat Conservation Trust's website, I purchased my detector from Wildcare:

This is what you get: 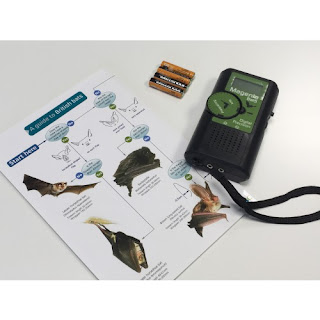 The package includes the detector, which is a simple but well constructed and intuitive device, an instruction leaflet, some batteries, and a very handy laminated guide to bat identification, including vocalisations and frequency ranges. Wildcare make a donation to the trust with each detector purchase. My package arrived very promptly and with luck we were able to detect bats the first time we tried it. Had we gone out a few nights later, it would have been a different story, as the colder, windier weather seemed to deter activity quite sharply.

Now it helped that we already knew we likely had a population of soprano pipistrelles near us, because I'm still no good at bat identification other than very crude estimates of size. This type of detector requires the user to dial in a frequency based on the expected bat species, which you then search around until you pick up clicks and squelches, helpfully shifted into the human auditory range. But it's possible that you could miss some bats completely if you're searching a long way from their preferred band. There are more sophisticated types of detector that get around this, but the superheterodyne type gives you the immediate gratification of bat noises, and for me that's more than enough to be getting on with. The joy of locking onto a bat and beginning to experience its sound world is not to be underestimated: it's like taking out earplugs and hearing birdsong for the first time. This goes on all around us and we're mostly oblivious to it.

I found myself a little interested in the history behind the science of bat echolocation, which in turn took me to Wikipedia (where else) and the story of Robert Galambos, who was also an early pioneer in auditory brainstem and cochlear implants:

I have now joined the Bat Conservation Trust and look forward to finding where this new interest will lead. Bats have been in the news for all the wrong reasons lately, so let's hear it for these fascinating creatures.