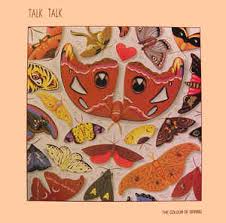 Oh, and I liked Talk Talk so much that one of their songs provided the last line of a novel.
Posted by Al R at 05:11