Star Trek: The Next Generation rewatch - Encounter at Farpoint

Having recently finished watching the complete run of the remastered episodes of the original series of Star Trek, I felt like diving into one of the later series. The release of the Next Generation in fully remastered format on Blu-Ray seemed a good place to start, so I bought the complete set with the intention of watching from the start.

I've loved Star Trek since I was tiny. As a child, watching a black and white television set in Cornwall, there were two series that particularly fascinated me. One was Star Trek, and the other The Virginian. Whether this accounted for a lifelong affection for space and Westerns/cowboys/horses, I'll leave to the psychologists, but there's no doubting the vivid mark that Star Trek left on me. A few years later, after we had moved from Truro but were still living in Cornwall, two further pivotal events helped cement my feelings for Star Trek.

The first was getting the Aurora kit of the Enterprise: 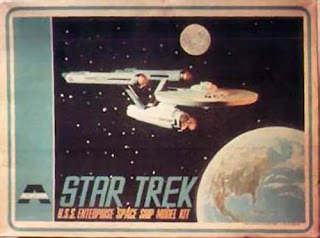 I think it lasted about three weeks before the nacelles snapped off, but what a glorious three weeks they were. Surely this is the weirdest spaceship design to ever attain iconic status? From an engineering/physics point of view it makes no sense whatsoever, but it just looks right and for my money few of the later designs have quite hit the same marks.

The second pivotal event was watching Star Trek in colour for the first time, at my grandmother's house in Barry. Even now, the original series looks very colourful, from the uniforms to the set designs to the use of lighting filters in many of the shots. In the early seventies, having been conditioned by exposure to the episodes in black and white, it was a real jolt to the eyeballs. The remastered episodes look very good, incidentally, with some sympathetic use of CGI to update some of the effects and sets.

Star Trek was often on television in the early seventies. During school vacations, the episodes were broadcast in the morning in a format called "Holiday Star Trek", which I've taken to mean episodes which were deemed not to contain any overtly adult or upsetting themes, although whether that was actually the case I don't know, as it just seemed like a random grab-bag of stories to me.

My admiration for the series was further reinforced by an article which appeared in Speed & Power magazine around 1974, consisting of a two-page feature which brought us exciting facts like exactly how big and fast was the Enterprise. Given that the Enterprise was deemed to be a bit less than a thousand feet long, I then became obsessed with relating this dimension to real world objects, such as the television masts near our home. I'd been told they were a thousand feet tall so I tried to imagine the Enterprise standing on its end, next to one of these masts. But that didn't seem anywhere near big enough to me. I had a similar problem with Captain Nemo's submarine -*.

Anyway, that's enough rose-tinted nostalgia. Fast forward to 1988. Star Trek was coming back onto television and by some means that I don't quite recall, the pilot episode was available to be shown in one of the common rooms at Newcastle University. Thus, those of us who cared gathered round on plastic chairs to watch "Encounter at Farpoint". At that point, there had been a few hints about what to expect. We knew that the main captain was to be played by a bald British actor, that there would be an android, a Klingon, and so on. But in those pre-internet days there was far less in the way of "spoilers", so I remember going into the screening with very little expectation of what to expect. 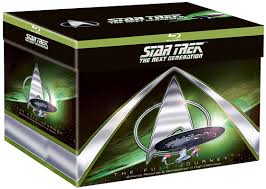 The prevailing view, as far as I'm aware, is that the pilot was an underwhelming opener to what would prove to be a weak couple of seasons, before The Next Generation really found its strengths. That certainly chimes with my recollections of that screening, in that the early appearance of "Q" - the recurring alien trickster figure - seemed to harken back to some of the hoariest episodes of the original run, in which super-powerful alien demigods were forever popping up on the Enterprise's bridge, usually in some sort of period costume.

Rewatching "Encounter..." now, though, after a gap of nearly thirty years, brings a more balanced view. It's not actually that terrible. The pace is slow, and the stakes are never more than vague, but perhaps it needed that narrative space to allow scope for the characters to establish themselves. And, allowing for some stiffness in their interactions, there are welcome moments when the pilot takes time to allow the characters to present themselves, which perhaps wouldn't be the case if there was a lot more running around and shouting.

Significantly, if you've splashed out on the Blu-Rays, it looks magnificent. They did an amazing, and by all accounts expensive and painstaking job, in restoring this series. The effort is worthwhile, because - allowing for the inevitable production economies of indoor sets masquerading as planetary locations - it holds up very, very well for a show made thirty years ago.

Above all else, it's a reminder that there was a time when Star Trek was actually forward-looking, not afraid to move beyond its past.

*- Verne describes the Nautilus as being seventy metres long. I think it some point I must have encountered a mistranslation which put the length at seventy feet, because I remember being convinced that this was nowhere near big enough.