Beyond the Aquila Rift is out

Today sees the UK publication of my huge Best Of collection, "Beyond the Aquila Rift" - around two hundred and fifty thousand words of short fiction, plus exclusive story notes. Here's the UK cover: 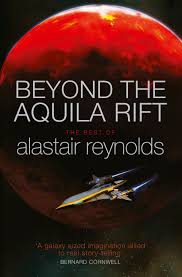 And here's a link to the Amazon page for the book:

None of this would have happened without the indefatigable efforts of Jonathan Strahan and Bill Schafer, who worked together to produce the Subterranean Press edition, which eventually appeared a few weeks ago. I am grateful to both of them, and the whole Sub Press team, for their enthusiasm and support over many years. I am also indebted to Gillian and Robert, my editor and agent respectively, for working hard to make it possible to have this near simultaneous release of the UK edition.

“This collection of 18 long and short stories by Reynolds (the Poseidon’s Children series), one of the most gifted hard SF writers working today, displays his facility for building fascinating settings and integrating romance and mystery plots into space opera… Readers will greatly appreciate the breadth and variety of this deeply enjoyable collection.”

"Combining the melancholy fatedness of early George R. R. Martin, as found in Dying of the Light, with the clear-eyed cosmicism of Stephen Baxter, Reynolds gives us a galaxy where the gravity of astronomical phenomena is counterbalanced by the dark energies of the human heart. This collection should stand as a cornerstone of the contemporary SF edifice, showing us exactly how to elegantly fuse those separate but overlapping magisteria."

The complete story selection is as follows:

Quite a lot to get stuck into, and a nice selection of material covering different modes and themes, I think. The Orion cover, illustrated above, is gorgeous, but I'd be remiss in not showing the equally lovely illustration done by Dominic Harman for the Sub Press version. Dominic and I communicated closely during the execution of this illustration, as Dominic was determined to get the lighthuggers just right - and he did. 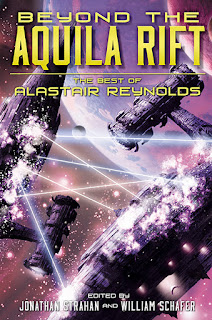 The Lettered edition is sold out, but Sub Press still have copies of both the Trade and Limited versions, and if you go for the latter, you'll get the slipcased one with my cover: 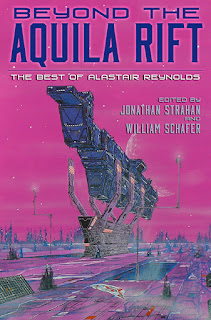 Rather pleasingly, this edition also has a fold-out rendition of Dominic's artwork, and splendid it looks as well. Really you can't go wrong with any of them.
Posted by Al R at 08:40