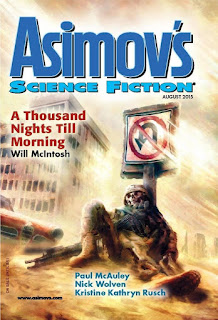 The August issue is a particularly strong one. Earlier this year I lavished praise on Nick Wolven's "On The Night of The Robo-Bulls and the Zombie Dancers", and Wolven's lead piece in this issue - the equally awkwardly titled "No Placeholder For You, My Love", while shorter, is no less strong. We meet the protagonist, Claire, at a dinner party in what appears to be New Orleans, where Claire in turn meets Byron, a mysterious and attractive stranger, but before long we're being clued in that all is not what it seems: "She lifted her glass of wine to her mouth, and the liquid vanished the instant it touched her tongue." Claire, we soon realise, is - along with Byron and everyone else she meets - embedded in a kind of virtual reality simulation, an elaborate construct with a particular set of rules, and which exists to serve the emotional needs of the real people existing beyond the simulation. For the versions of Claire and Byron inside the construct, life is a joyless shuffle of romantic permutations, endless parties, endless encounters with prospective partners, with each new roll of the dice signalled by the bells of the midnight chime. To say more would be to spoil the pleasures of discovering Wolven's premise, but Claire and Byron - after being separated and thrown back together again - gradually come to a tentative understanding of the parameters of their world, and develop a plan to exploit a latent flaw in the environment. However, things don't quite go as intended. Wolven has a heady, sensuous style, displayed to good effect in both of his Asimov's stories, each of which is saturated with the heat and mystery of long  sultry nights: "The breath of the bayou was in the air, warm and buoyant, holding up the clustered leaves of the pecan trees and the high, star-scattered sky." It's a story which is as much about atmosphere as the science fictional mechanics of the setting, and I enjoyed it tremendously.

Every now and then I'm in exactly the right mood for a piece of bleak, dystopian writing, and Kelly Robson's piece came along just at the right time. "Two-Year Man" is the first of hers that I've read, and it's very good indeed, even if I'm sure that I'll unpack rather more from the story on a third read. This is a bracingly sad story about Mikkel, a "two-year man" - the title refers to the time served in some kind of military campaign, in what appears to be an openly anti-semitic future or alternate history - who is at the absolute bottom of the barrel compared to the four, six and even eight-year men above him. At home is Anna, Mikkel's childless wife. When Mikkel rescues a kind of baby - a "taint" - from the lab where he does menial work, he thinks at first that it will make Anna happy. But the baby is an odd, reptilian thing, possessed of a beak and talons, something which is accepted largely without comment by Anna and Mikkel's friend Hyam. That's one of this story's considerable strengths, in fact: the way it refuses to explain itself, or defend its worldbuilding with lengthy interjections. The writing is enjoyably downbeat, striking an almost Lynchian air of grim fatalism:

"Café Sluka has the best strudel in Vienna, so everyone says," Mikkel said as he passed through the security gate.

"Like you'd know, moron. Wouldn't let you through the door."

Mikkel ducked his head and kept his eyes on the floor. "I heated them in the microwave for you."

He rushed out into the grey winter light as the guards munched warm strudel.

In the interests of transparency I should probably mention that Paul McAuley is an old friend, someone whose career I've been following with admiration for more than thirty years, ever since his story "Little Ilya and Spider and Box" broke ground in Interzone by being actual honest-to-god science fiction set in the future with spaceports and interstellar travel and so on. But the fact is that better writers and critics than me have praised his work, both at novel and shorter length, and it's no real surprise that a McAuley piece delivers the goods, even if you can't ever be sure quite what you're going to get from him. If there's a common thread, it's that it's often Hard SF, but in which the speculative conceit is derived from biology, rather than the usual nuts-and-bolts defaults of physics and engineering. Not that he can't do that other stuff as well, but - as a trained botanist - his biological inventions have a rare conviction, amply demonstrated in this post-Collapse story of a woman named Mel, a "crazy old bee queen" who tends a very unusual beehive. When an outlaw gang rolls up at Mel's demanding that one of their number be treated - the bees have been genetically tweaked, so that their honey has enhanced antibiotic properties - events rapidly spiral into violence. The story is neat enough as it is, embedding some chilly insights into the biology of bees: "Some outsiders believed that because they were tweaked and networked the bees had somehow acquired sentience. They hadn't. And even if they had, it was doubtful that they would have acquired any concept of love or hate, or free will. They knew only loyalty and the chains of duty: theur life paths were engraved in their genes. The organization of the hive was as pure and pitiless as mathematics." But just when it seems to be heading toward a slightly too-pat ending, though, McAuley wrong-foots us, and the resultant conclusion offers a sharp sting in the tale.

Karl Bunker is a writer new to me, but "Caisson" is an enjoyable piece saturated - fittingly enough, as it deals with workers operating underground while breathing compressed air - with a truly oppressive atmosphere. It's set in the nineteeth century, during the difficult and arduous construction of the Brooklyn Bridge, and deals with the unlikely friendship between two of the men forced to labour in the high-pressure box of the title, sinking the foundations for one of the bridge's two huge towers. When one of the men, Mischke, makes an unusual discovery during the excavations, something strange and wonderful comes into both their lives. Primarily a character piece with a keen sense of mood and place, the fantastical elements are mostly kept off-stage, which is perhaps for the best, since the underlying conceit doesn't really stand close scrutiny, at least as science fiction. But it's a satisfying story all the same, exactly the kind of thing which might have made a memorable episode of The Twilight Zone or the Outer Limits.

If I say too much about Kristine Kathryn Rusch's sweet "The First Step" I'll risk breaking the story's considerable charm, but it's perhaps sufficient to say that this is both a time travel story and a piece about the personal costs that might be attendant on making the achieving of time travel one of your life goals, even if you do eventually succeed. It's a short story, told briskly, and it feels satisfyingly tight and pared down, and beyond that there isn't much to say except to say that it's an extremely likable variation on a very old theme.

The long final novella, Will McIntosh's "A Thousand Nights till Morning", breaks little new ground in either its themes or its telling. But on its own terms, it's one of the most compulsively enjoyable science fiction stories I've read in quite some time. It's a resolutely old-fashioned account of aliens invading Earth, then being challenged by a ragtag group of human resistance fighters. What the story has in spades is a breakneck pace, as well as a cleverly and plausibly conceived foe in the alien Nunki with their total reliance on biotechnology. One minor criticism I've had of some of the stories in this year's reading is that they take a leisurely, novelistic approach to scene-setting, but no such complaint can be levelled at McIntosh. We start on Mars, with a human expedition learning that aliens have invaded Earth, and we're barely a page in before we've met the protagonist, gained some sense of him, learned about the aliens, something of their nature, and realised that the Martian expedition is now in deep trouble. Before long, the Martians improvise a desperate counterstrike against the aliens, damaging their biotechnological capability, and then send an expedition of their own back to a terribly wounded Earth. We're still only a tiny way into the story when the rocket lands back in Chicago, and if anything the story only kicks into a higher and more menacing gear when Aiden and his friends have to figure out how to help the survivors turn the tide against the Nunki. There are some neatly inventive touches here, such as the use of sign language to communicate with the Nunki, and the way in which the aliens have to learn to use human technology - guns, school buses, medical labs and so on - when their own biological systems falter. Running through the piece, though, is a strong focus on character, with Aiden having to face up to his responsibilities to an old lover, despite his deep and paralysing aversion to risk. It may seem faint praise to call a piece a real page-turner, but that's just what it is, and it takes some considerable skill to inject a sense of freshness and surprise into such well-trodden territory as the alien invasion story.