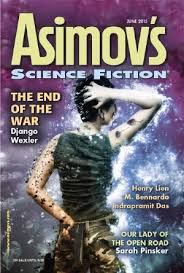 At the start of the year I began reviewing 2015's run of Asimov's Science Fiction, but I was careful not to make any rash promises about delivering those reviews in anything like a timely fashion. My efforts to read the April/May double issue came acropper when I lost my copy of the magazine in Paris, and although editor Sheila Williams very kindly sent me a pdf of the issue, for various boring technical reasons, I can only read pdfs in my office - and I've had a novel to finish in the meantime. As it happens I'm just about done with the double issue but in the meantime I thought I'd skip ahead a month and do the June edition first.

With my own short fiction reading being so spotty in recent years - part of the reason I started this exercise - I came to this issue completely unfamiliar with any of the contributors, having not knowingly read anything by any of them before. As such, I'm pleased to say that I found it a generally strong issue, with a nicely varied selection of stories.

The lead story is "The End of the War" by Django Wexler, and it's military science fiction with a space-based setting. No, come back - it's actually pretty inventive, with an effective evocation of combat between different vessels equipped with advanced nanotech weapons. The war has been going on a long time:

The salvage isn't anything to write home about. It's a seventh-generation wetship, probably a destroyer. The second or third generation ships were profligate with materials - heavy metals, exotica, even organics - and are thus the most valuable targets for harvesting. By the seventh generation, resources were already getting scarce, and there's less worth digging out of the old hull.

There's nothing startling about the narrative choices made here, but the story's effective enough as it stands, if you can get past the overload of jargon and tech-talk. When I encounter a piece like this, though - told in the first person -  I'm more and more minded to ask myself - exactly who is being spoken to, and under which circumstances? I'm as guilty as anyone of making unexamined viewpoint choices in my fiction, but it's definitely something that preoccupies me more as I get older, and I can't help wondering how often these decisions aren't underpinned by any deeper considerations of form and intent, but are rather made on the spur of the moment, simply because a story feels like it'll work better one way than the other.

Henry Lien's "The Lady's Aquatic Gardening Society" is note-perfect in its evocation of the starched manners of high nineteeth century society. Dealing with an escalating feud between two almost equally dreadful women engaged in vicious social oneupmanship, I can't help wondering whether it owes something to the wonderful Mapp and Lucia stories of EF Benson.  The arch, comedic tone is very similar. But - although it doesn't become immediately clear until rather late in the story - it is science fiction, of a sort, and this tit-for-tat game eventually has (literally) world-changing consequences. If I've complained in previous reviews of a certain sameness of voice in many of these stories, that's not an issue here - the evocation of a certain ghastly social set is excellently done and sustained without a slip. If there's one problem with the piece, it's that the tone, once established, doesn't vary to any significant degree, leading to a certain monotony of effect as the story progresses. I also felt that the back-and-forth snidiness between the two main protagonists, while effective enough, wasn't quite as sharp and steely as it should have been. But these are minor quibbles and I enjoyed the piece very much.

"Mutability", by Ray Nayler, takes its time with some extremely indulgent scene-setting, almost the kind of leisurely opening you'd expect in a novel, but once it kicks into gear it's an effective and somewhat warm meditation on the limits of memory, especially (as is the case here) in the very long-lived. In this future society, medical longevity has granted people many centuries of life, but the "horizon" of their memories is a constantly moving front which only reaches back so far. It's a fascinating idea which I've seen touched on elsewhere, but Nayler makes it the focus of the story and the ramifications are explored to full effect. It's also a rather touching love story, with - gasp - a happy ending, of all things. I'd need to read it again to pick apart the degree to which coincidence drives the story, but that wouldn't be any particular hardship.

Krasnikov Tubes! Who doesn't love a science fiction story featuring Krasnivok Tubes, eh? Oh well, perhaps it's just me. Anyway, "The Muses of Shuyedan-18" by Indrapramit Das is a nicely  inventive piece about some human explorers studying an exceeding weird alien ecosystem on a distant planet accessed by aforesaid Tubes. Tani and Mi are two female members of this expeditionary team, sent out from their "exoprot" base into the field to conduct observations of the reproductive cycle of a vast and strange alien organism loosely translated as a "lifecastle". Against the norms of their exoprot culture, illicit lovers Tani and Mi rashly decide to have sex in their transparent camp-tent and are witnessed by the alien, which then commemorates the act by shaping humanoid sculptures or "mindcarvings" into its own flesh. The problem for Tani and Mi is that their act is now enshrined on the side of the alien, there to be discovered by another surveyor from their colony. The story plays out from this incident, with flashbacks to the early days of Tani and Mi's relationship. There's nothing terribly groundbreaking in the voice or narrative choices here, but the story's salted with many nicely evocative details, and manages to feel about as up-to-date as any first contact piece you're likely to encounter, proof if any were needed that there are always new stories to be told.

I struggled slightly with "Ghosts of the Savannah" by M. Bennardo. There's nothing clumsy or incoherent about the story, but throughout it I had the nagging sense that I was missing something obvious, and perhaps I was. On the face of it, it's a piece of fiction set in prehistoric times, involving a hunter-gatherer culture, and centering on two sisters - Sedu and the (I think) unnamed narrator - who are much better at running and hunting than the males of their village, and not terribly keen on the idea of settling down to a life of childbearing. When Sedu runs into trouble after sustaining an accident, the narrator has to lie to her village to protect her sister.  It could just be a straight evocation of ancient human times - the setting is clearly Africa, since there are gazelles, ibis and so on - but there are odd details which confound that simple picture. The girls are orphans, and we don't learn too much about their origins. They're afflicted, if that's the word, with Secret Voices and Secret Senses - but then so (it seems) are all the other members of the village. When Sedu breaks a bone in her leg, we're led to believe that she could be up and walking again in mere days. What are we to make of that? It's not just Sedu who has that seemingly magical capacity for rapid healing, but all the others. Is it just because they're tough, or is something else going on? Are they time travellers, who've forgotten their origin? Aliens? Is it the future, and their bodies are stuffed with self-repairing nanotech? I couldn't work it out, and when the narrator drops this seemingly out-of-place observation into the text:

Can the sharpest-eyed hunters see the tiny pinprick of our fire glimmering in the dark? Do they know what it means? Or is it just another distant mystery, another alien enigma in the night? A new phenomenon with no cause or effect, to be catalogued and named and avoided by every sensible human?

I found myself none the wiser. There's also an earnestness of tone to this piece which makes for somewhat dull reading - it's all too suggestive of a creative writing assignment - "imagine yourself in the mind of a prehistoric hunter-gatherer" -  lacking humour or zest or any real spark that jolts the senses. I don't want to be too critical, though, because it's unfair to dismiss a story on the basis of one reading, and it's entirely possible - probable, even - that I missed something that was will be glaringly obvious to other readers.

The last and best story in the issue, in my view, is the piece by Sarah Pinsker. Entitled "Our Lady of the Open Road", it's nothing more than an account of a few days in the life of a travelling rock band, in an era when actual live music has beem more or less squeezed to the margins by ubiquitous hologram playback technology. The band - a trio - are making their way through the backroads of Middle America in a much-loved but elderly touring van modified to run on cooking oil, and the story confines itself to their day to day hassles of finding food, keeping clean, fuelling the van and getting gigs in various scuzzy dives. What's great about this story is that, although the stakes aren't terribly high, it's told with such complete conviction and attention to detail that we do come to care about the future of the band, and when the lead singer has to make a difficult choice about the band's financial set-up, we're fully invested in her dilemma. It's full of nicely authentic details, too, such as the correct protocols for taking towels from hotel rooms. What stands out more than anything, though, is the affection that the band members feel both for each other and their van. It's also dead-on about a certain son of New Jersey:

Down at the other end, two blonde women stood facing the Bruce holo, singing along and swaying. He pointed in their general direction, and one giggled and clutched her friend's arm as if he had singled her out personally. Two guys sat on stools near the stage, one playing air drums, the other watching the women. The women only had eyes for Bruce.

I got where they were coming from. I knew people who didn't like his voice or his songs, but I didn't know anybody, especially any musician, who couldn't appreciate his stage presence.