The great Iain Banks has died. We had known this day was coming, of course, after Iain announced his terminal illness a couple of months ago. But it still feels to have happened shockingly, unfairly soon. My thoughts are with Iain's family and friends, and I am very sad that we only got to meet on a handful of occasions.

Here's a snap taken at the last such meeting, late last year, when Iain, Peter Hamilton and I teamed up for a Google hang-out. It was terrific fun, as I think you can tell from the smiles on our faces. Iain was on excellent good form - it was, as ever, a wonderful thing just to be able to hang out with him. 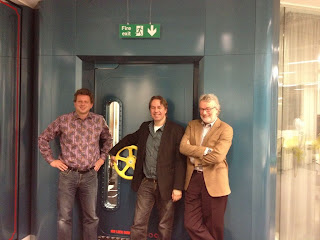 After the event, the three of us went to a nearby pub for a quick pint. Iain had to dash off (Peter and I continued on for a pizza and more beer) but I remember telling Iain that I looked forward to seeing him soon as I wanted to tell him something about Raw Spirit, his 2003 book on whisky. Iain laughed with that particular glint in his eye, but time was tight and the story had to wait. I was confident I'd get a chance one day.

Well, it's not much of a story (the main thing was that it was Iain's book) but here it is anyway. I have had a layman's liking for single malt whiskies for many years without ever going deeper than that simple, uncluttered appreciation. A few months earlier, though, I had picked up a copy of Raw Spirit in the interests of educating myself. On the train up to London I read about the smokey and peatey Laphroaig, which I knew I had tasted and liked, and also Lagavulin, which I did not think I had sampled. That was my mission, then - to try some Lagavulin at the earliest opportunity, and see how it measured up against the Laphroaig.

That night I had attended some literary thing and found myself back in my hotel, alone, at the unreasonably early hour of 10.00 pm. I'm normally a bit hyper after these things so rather than squirrel myself away in the room, I generally prefer to go down to the bar and have a quiet and reflective drink. Suitably emboldened, I stuffed some cash into my pocket and wandered down to the bar. Scanning the whiskies I immediately spotted a bottle of the fabled and as yet unsampled Lagavulin. Just the ticket, I thought. I asked the barman to pour me a single measure, without ice or water. Supposedly you really ought to drink whisky with a small amount of water to activate the aroma (I was told this by a friendly and authoritative Scots barman, during another post-literary drink, but old habits die hard). The London barman poured me my whisky, gave me the glass and told me my single measure would cost in excess of ten pounds.

Yes, that was a shock to me as well - London prices, I suppose - and this was a very swish hotel by my usual standards. But to my dismay I simply did not have enough money on me. The room had been paid for me, so I did not want to get into the complication of charging the drink to my account, and then having to sort that out in the morning. Instead I rather lamely apologised and said I would need to return to my room to get more money, which might take several minutes.

The barman, though, waved aside my embarrasment, took the money I had on me, and told me to enjoy my Lagavulin. Which I did, adding it to my mental register of sampled whiskies, and deciding that it compared well against the Laphroaig. Just the one measure, though. I suppose, in the back of my mind, I might have been half anticipating another, if the Lagavulin had cost about half what it did.

So there - not, as I said, very much of a story, but I think Iain would have been tickled - it was his book, after all, that had brought me to this bar - and at the very least I'd have enjoyed being gently steered to some other discovery.

I did not know Iain terribly well - we had met on, I think, three occasions - but I liked him tremendously and found in his enthusiasms exactly the person you might hope had written all those dense and imaginative novels. If you felt that you knew Iain through his work, then - on my admittedly limited experience of the man - you probably did.

And now I'm off to have a look through my whiskies, because I fancy a dram.

[Update - it was a glass of Laphroaig, because that was all I had in. But very nice all the same.]