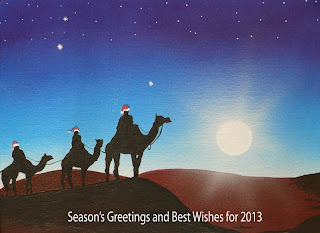 Best wishes for the holiday season and coming year - may it bring good health, general pleasantness and lots of excellent reading. Do you like the card? It's a joint effort by my wife and I. I did the background, my wife did the camels, based on a photo from a camel trekking tour she did recently. The Father Christmas hats were cut out of paper, positioned in place, and then the whole lot was photographed, very carefully, before either of us sneezed and sent the hats into oblivion.

2012 has been an interesting year. I did a huge amount of writing, which is good. I also did a substantial amount of travelling, which is also good in many respects, but perhaps less so for the actual business of getting work done. By the middle of the year I had packed in two visits to the Netherlands, one to Denmark, another to Dubai and another to Japan - as well as numerous smaller trips within the UK. All of this was terrific to one degree or another (my mind is still reeling from Japan) but I am very poor at writing efficiently when on the move, or indeed for a week or so either side of a big trip. There are always lots of things that need to be done at the last minute, not to mention the double-whammy of jetlag when you arrive somewhere and also when you get back.

I'm often asked about discipline and working routines, especially given that I work from home where there are plenty of distractions and no boss other than the calendar on my wall and my own conscience. But in fact I've never really found it a problem. Long before I finally quit my day job, I had intervals of part time working in which I was able to road-test my ability to work from home. A few intervals of unemployment between contracts also came in handy. For me, at least, it's not all that hard to shut myself away and spend the day writing. It is, after all, the thing that I wanted to do. It would be odd to invest years of your life getting to a position where you can write all the time, and then end up putting just as much energy into avoidance strategies.

What I'm less good at is time management. I tend to over commit myself, saying yes to things that in hindsight it would have been wiser to decline. It's hard though. Again, after years of brutal, soul-crushing rejection you spend years getting to a position where people want you to write stuff for them. That's a pretty amazing position to be in. The last thing in the world you want to do is start turning them down, especially when the people are nice and the work also sounds interesting. I am terrible for agreeing to produce stories six or nine months down the line, a deadline that seems an eternity away. But the weeks roll around, and suddenly the story has to be done now, this week, while you're also trying to deliver on some other obligation. I have started being firmer with myself, declining story approaches, but I still end up over committed. The same goes for convention attendances, speaking engagements and so on. Generally speaking these are all quite good fun, but even a one-day event can take two or three days out of my writing week. So I've started cutting down on those as well.

I was thrilled to be asked to do the Dr Who book, but again I managed my time badly. I started doing story notes as far back as December 2010, but I did not settle down and start writing the book until earlier this year. I had a month between the Dubai and Japan trips, and I naively thought that might be sufficient time to produce a workable draft. I had spent the latter half of 2011 working on Steel Breeze, the follow-up to Blue Remembered Earth, and had written about 100,000 words of "stuff". Progress had stalled after Christmas, though, due to uncertainty about the handling of a section of the book. I put it aside to work on another of those story commitments I should probably have declined. Then I went to Dubai.

Unfortunately, it took me a bit more than 4 weeks to do the Dr Who book. In fact it was closer to 4 months. I was pleased with the final book, and still just as delighted to have had the chance to write it, but it had eaten a much bigger hole (should that be spacetime rupture?) in my writing year than I anticipated. And of course, that was time that I was not actively working on Steel Breeze. Never mind, though - I had 100,000 words in the can, didn't I? Sadly, though, when I returned to SB - this after completing yet another story commitment, and a few more foreign trips - I didn't like what I had written in 2011. The book was going in the wrong direction. It felt too tonally detached from BRE - almost like a completely new universe. I had opted to tell the story with the wrong main character. There was too much stuff set on generation ships and not enough stuff about Earth and Africa in it. After some agonising and staring at calendars, I realised I had no practical option but to start again, back to page one. Yes, there was a tremendous amount of material in the initial 100,000 words that could be adapted and salvaged, but still much that had to go - and a huge amount of totally new stuff that had be written from scratch.

So I'm late, basically, which is not good, and certainly not where I wanted to be at the start of this year. Dig back into the blog comments and at some point you'll find me confidently assuring someone that the Dr Who book would have no impact on my other writing commitments. I was wrong. It wasn't totally the fault of the Who book, of course - the 100,000 words would still have been problematic - but I probably would not have taken so long to realise the fact. On the plus side, I am now nearly done with it. Nonetheless, there is no escaping the fact that the interval between the first and second novels has been much longer than desirable. That said, I still feel positive about BRE and that makes me even more determined that SB should be a strong successor, not just a tick-the-boxes sequel. I've never consciously gone into a trilogy before, so it's been a learning experience, one that I'm not yet done with. My editor Simon has been tremendously supportive through all this, I hasten to add - but I am more than conscious that there are many readers who will have had to wait more than a year for the follow-up. I'm genuinely sorry about that. My immediate strategy, other than working damn hard on the second book, is to keep 2013 as free as possible so that I can dive into the third novel without too many distractions. For that reason, I've been saying "no" to a lot more things than usual.

A year from now, we'll see how I did. In the meantime, thanks for your patience, thanks for reading, and I hope you enjoy both Steel Breeze and the Dr Who novel when they appear.