(This short piece on the film Silent Running appeared in Cinema Futura, edited by Mark Morris, in 2010.) 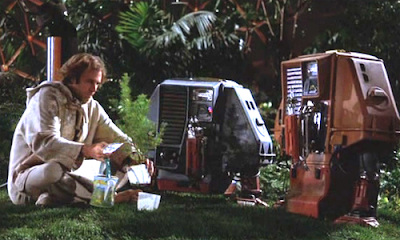 In the future, some kind of catastrophe – planned or otherwise - has befallen Earth’s once great natural environments. All that’s left is a handful of domed preserves, drifting through the solar system attached like glistening seed pods to huge skeletal space freighters. After the order arrives to jettison the forests, blow them up with nuclear bombs, and return the ships to commercial use, most of the crew are jubilant about the prospects for returning home. But one ecologically-minded astronaut – the begowned, plant-loving hippy Freeman Lowell – decides he isn’t going to stand for this. Before very long he’s killed the other crewmembers, taken the ship off on a white-knuckle ride through Saturn’s rings, and begun bonding with the maintenance drones. Lowell is eventually forced to sacrifice himself to save the last forest, itself left in the care of the final fully-functioning drone. The film closes with touching images of the robot tending the garden, continuing the task that humans couldn’t be trusted not to screw up.

It’s safe to say that Silent Running is implausible on many levels. I can excuse the habitats in space – maybe the domes already existed before Earth’s ecosystem went wrong – but it’s not at all clear why they need to be shepherded around attached to enormous spaceships. It’s even less clear why they need to be blown up, rather than just left to orbit the sun on their own. The story wouldn’t kick in unless the domes were imperiled, though, and (minor understatement ahead) it’s not as if the decisions of governments and corporations always make absolute, binding sense in the real world. Setting aside the dubious combination of magical artificial gravity on a ship that in all other respects appears to be bolted together from late-twentieth century components (an aircraft carrier was used for the impressively spacious interior shots), what is perhaps more problematic is the time it takes the treehugging Lowell to realise that the reason his sole surviving forest might be ailing, on the wrong side of Saturn, is that the Sun is now a very long away away. Long before the penny drops he hefts a yellow cue ball, as if almost making the connection…

Despite these problems I love Silent Running unreservedly. Emerging at the tail-end of the Apollo era, it’s as much a part of the early seventies as After the Goldrush, and should be seen in that context. When I saw it for the first time, at the other end of the seventies, it slotted neatly into place as the missing jigsaw piece tieing together the other big SF films of the last decade, of which it seemed to share a consensus view about the way the future was going to look. It had the plausible industrial design of 2001: A Space Odyssey: the huge, grey-clad spaceships sliding ponderously past the camera, the control rooms filled with complex navigational hardware and shuffling readouts, the emphasis on artificial intelligence as an essential component of our spacefaring future. It had the shuffling, bipedal robots that I had glimpsed in background scenes in Star Wars. It had the downbeat, working stiffs in space aesthetic of Dark Star (prefiguring Alien, which I didn’t see until several years later). Above all else, and for all its moments of humour, it was terribly, terribly sad: things just didn’t go well for Freeman Lowell or anyone around him. Stars Wars changed matters, of course, but the one thing you didn’t go to seventies SF for was a happy ending.

The connection with 2001 ran deeper than I appreciated at the time. The director, Douglas Trumbull, had led the effects team on that film. One of the key differences between Clarke’s novel and the film is that in the book the Discovery travels to Saturn, not Jupiter. In fact the change to Saturn was Kubrick’s idea – he was keen on the idea of showing the rings, and having the Discovery fly among them. Clarke rewrote the story accordingly. But Trumbull’s team, already under pressure with existing work, “went ape” and vetoed the change, which is why it remains Jupiter in the film. It’s tempting to view the Saturn sequences in Silent Running as Trumbull returning to do justice to the ringed planet, but in truth the Saturn encounter, while dramatic, is not even the most impressive element in the film, and doesn’t really improve upon anything in Kubrick’s masterpiece. While some of the spaceship effects are good, by far the best things about Silent Running are the convincingly rendered interior shots – the domes and vast, mechanized cargo bays - and the marvellously realised drones, all of which were operated by amputee actors.

Comparisons with 2001 rather miss the point, though. The earlier film was meticulously plotted and designed, with a logical basis for everything that occurs or is shown, whereas Silent Running functions better as a dreamily rationalised eco-parable. It’s all about conservation, ultimately, and the lengths one could or should go to in order to protect something utterly irreplaceable.

The film has been accused of being morally dubious, but I don’t go along with that. We’re not invited to sympathise with Lowell’s actions – even he seems rightfully appalled by what he has done – but merely to accept that, given the tremendous stakes, a good man might act in this way. After he has killed his colleagues, Lowell touches his conservation pledge, as if desperately trying to reassure himself that he has done the right thing. This is not a man with a clear conscience. And while he does end up saving one of the forests, he doesn’t save himself. In fact Bruce Dern succeeds in portraying Lowell as at least mildly unhinged from the very outset. Still, each time I watch the film I can’t help but put myself in Lowell’s position and wonder if what he does is in any way justifiable. One could argue that the stakes are artificially high – that in the real world it would never come down to a simple choice between murder and losing the last forest in existence. But setting up that kind of duality is one of the things that science fiction does rather well, and Silent Running does it as effectively as any SF film I know.

One final point: early in the film we’re told that the domed preserves were created around the turn of the century. Later, we learn that Lowell has been involved with the project for nine years, and was there from the beginning – thus neatly placing the action around 2009 or 2010. Thankfully, of course, in the enlightened world of the real 2010, we don’t have to worry about anyone cutting down forests any more, or the Earth’s climate going bananas.