Griffith Observatory, LA. On my way to Reno for the World Science Fiction Convention, my wife and I flew into Los Angeles and sent a few days with some old friends of ours in Burbank. We only get to see them every five or six years and it's always great to hook up and renew our acquaintance with the area.

Built on the edge of Mount Hollywood, the observatory is a short drive from Burbank and on a clear day offers magnificent views across town and out to the sea. There was low-lying haze when we drove up, but the observatory buildings were still gloriously sharp and bright against a pure blue sky, doubtless as impressive and inspiring as when they were first built in the mid 1930s. 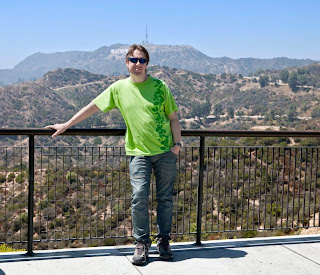 Griffith Observatory has never been a working observatory, but rather a place of education and outreach. In that respect it still seemed to be doing an excellent job, judging by the many children and adults evidently stimulated by the well constructed and informative exhibits inside. Even as someone with a background in professional astronomy, I found much to enjoy and think about. 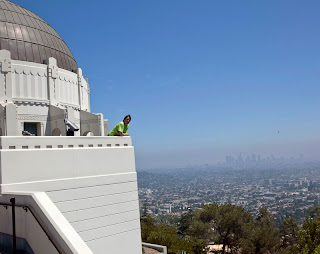 In the public imagination, Griffith is perhaps best known for its use as one of the locations in Rebel Without a Cause (it had apparently been used in earlier films, but never in its intended function). Fitting, therefore, that there should be a small memorial to James Dean on the Observatory grounds. 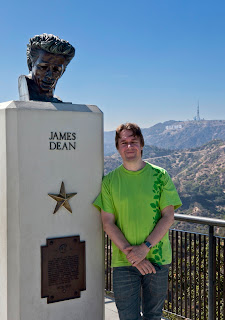 Thanks to Barbara Bella for the photographs, all of which remain her copyright.

I'm in Reno now, which is another story. I'll probably not have too much to say about the convention until I get back, but for now I'm enjoying it tremendously - although one does get rather tired of the sound of ones own voice after a day of panels and general discussion.