Apocalyptic SF - we don't just do cheery and optimistic, you know

I'm still blogging over at Babel Clash (see last post) but in the meantime, it looks as if Mike Ashley's Mammoth Book of Apocalyptic SF has appeared, just in time to be packed for your beachside summer reading. Most of the stories are reprints, but the book does contain new fiction by Eric Brown, Paul di Fillipo, F Gwynplaine MacIntyre, Robert Reed, and myself. Sadly, the book also includes the last new story by the late and much admired Kage Baker.

My piece is a longish story entitled "Sleepover", set off the coast of Patagonia in the 23rd century, after the world has (nearly) ended. The finished cover is slightly different to this, and I was also sent an otherwise identical copy of the book entitled "The Mammoth Book of the End of the World", but I think this is the title they decided to run with. 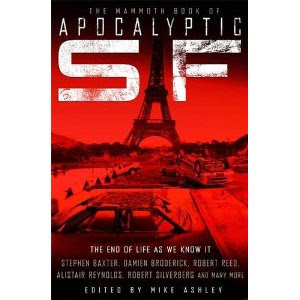