Later this year, a strikingly ambitious hard SF trilogy will reach its conclusion with the publication of the final volume. If I told you that the series features convincingly rendered exoplanetary locales, vast and perplexing alien artefacts, fractious political tensions between human explorers and settlers, plausibly extrapolated future technologies, a deft grasp of biology and physics, but also elegant writing, strongly evoked characters, and an immersive sense of place, then you'd probably be quite keen to get your hands on the books, as well as wondering why you haven't heard more of a buzz about them. The catch, perhaps inevitably, is that the Quantika books have not yet appeared in English, and are therefore all but invisible to the non-anglophone world.

Laurence Suhner is a Swiss science fiction writer, and her books have all been published in French. She is currently finishing the third Quantika volume, Origines, and the first two - Vestiges and L'Ouvreur des Chemins - have already appeared to considerable interest and acclaim in Switzerland and France. I had the pleasure of meeting Laurence during my attendance at the Imaginales festival in Epinal, back in 2013. We were both scheduled onto a panel, held in the lecture theatre of an observatory on the outskirts of town. It was late in the day, and I was tired after a gruelling and stressful journey from London. As the panelists talked, though, I was struck by Laurence's enthusiasm and depth of knowledge across a range of topics, from biology to the latest results in exoplanet astronomy. Later in the festival we ended up signing next to each other in the main tent and agreed to keep in touch. Laurence had only published Vestiges, the first Quantika book at the time, but while my terrible French wasn't up to reading it, it was obviously the sort of thing I would otherwise enjoy. In fact, it was pretty obvious that Laurence was writing the kind of SF that would do very well in English, if only she could succeed in getting it translated. Fashions in SF come and go, but there has always been a reliable core market for big, ambitious "hard SF" - if that's not too confining a pigeonhole for these books.

Later Laurence was able to send me some translated chapters from Vestiges, and I was immediately impressed, as I'd half guessed would be the case. Last summer, Laurence made plans to attend the London Worldcon, and it was a delight to meet up again and introduce her to friends in the field. More and more, though, I was struck by what an uphill struggle she faced in getting her work to a wider international audience. Few English language editors and agents are able to look at the books in their original language, but at the same time no one is realistically going to commit the expensive translation costs up-front on what is essentially an unknown quantity, especially when the books are big. It's different when a book is a break-out success in its native tongue, as can happen with some thrillers - but this is SF, and the economies of scale are different. Undaunted, though, Laurence is working to find a solution to the translation issue. In the short term, I hope to be able to read more of Vestiges. In the longer term, it would be fantastic to add this distinctive voice to the anglophone field, because I am sure Laurence would win many admirers. 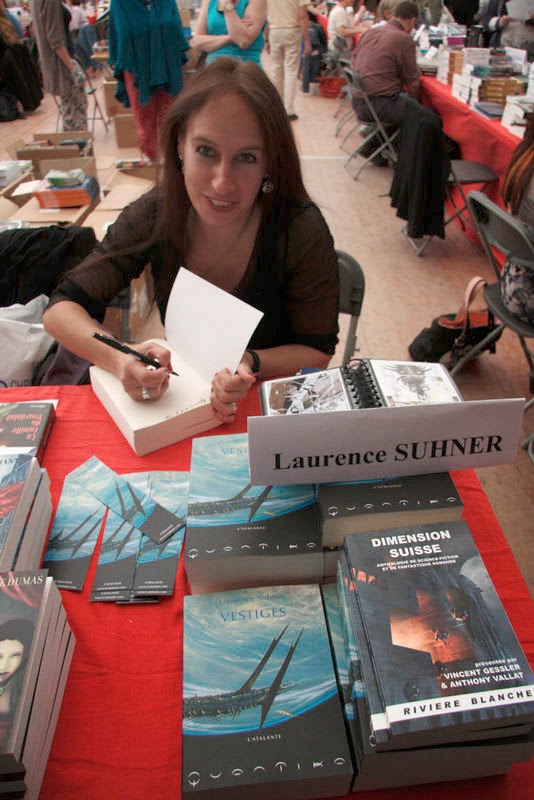 As Christopher Priest notes in his introduction to the third volume, "The literary and intellectual diversity (in her work) no doubt springs from the author’s varied background, which includes archaeology, Egyptology, physics, illustrator for bandes dessinées, storyboard artist, CGI design and  a love of playing the tabla. An adventurous young writer like this can sometimes make her competitors feel like miniaturists ..."

Indeed. During her London trip, Laurence had brought some samples of earlier work as a graphic novel illustrator, and it was wonderfully accomplished, to the point where I was left wondering why this talented writer isn't already famous.