A recent spell of clear skies had me returning to my lapsed interest in astrophotography. I've had the same telescope since about 1997 - a 9.25 inch Celestron Ultima - and while it doesn't have all the computerised bells and whistles of a modern GoTo scope, it serves me well and does everything I want it to. I don't have a dome or anything, so my scope has to live with me in my office until it's time to go and look at the stars. That means hefting the scope and tripod out in separate trips, bolting them together, and doing "polar alignment" every time I go out. As it happens, we're fortunate in that our house is lined up exactly on a North-South axis, so provided I position the scope's tripod in line with the edge of the patio or garden decking - also parallel to the house - I get close enough for my purposes. The scope's declination wedge also has to be set to the latitude where you're at, but you only need to do that once.

While the Ultima is great to use, its really optimised for achieving high magnifications of really "small" (in the angular sense) objects, such as distant planets or star clusters. Don't all telescopes do that? To some extent, but there's also a use for scopes which simply gather lots of light, without adding in lots of magnifying power. After all, it's fun to look at the Moon or some of the other objects in the sky which spread across a large angular distance. Last year I bought a piece of kit called a focal reducer which expands the Ultima's field of view (by lessening the magnification) but it doesn't make a dramatic difference. For that, I'd need a new telescope. Fortunately, it didn't need to be a large one - just a small, lightweight refractor - and because of that, it's perfectly possible to use the larger scope as a mount, piggybacking the smaller one. Over the last few weeks I acquired both the scope and the mounting hardware. Nothing fits out of the box, especially as the Ultima is long out of production and no longer corresponds to Celestron's standard tube length, but a friend with some metalworking skills helped me achieve the necessary alterations. Equipped with the CCD camera I obtained a few years ago, I was then all set to start looking at some of the extended objects I've been yearning to image...

Here's one of them - M42 or the famous great nebula in Orion. If you've ever looked at Orion on a dark winter's night, this is the fuzzy bit in the sword, easily visible with the naked eye. It's also one of the easiest targets for astrophotography but also one of the most visually striking, and I had to start somewhere. I achieved this image after a couple of nights' experimentation with different gain and exposure settings, and it's the result of merging three separate five minute exposures. 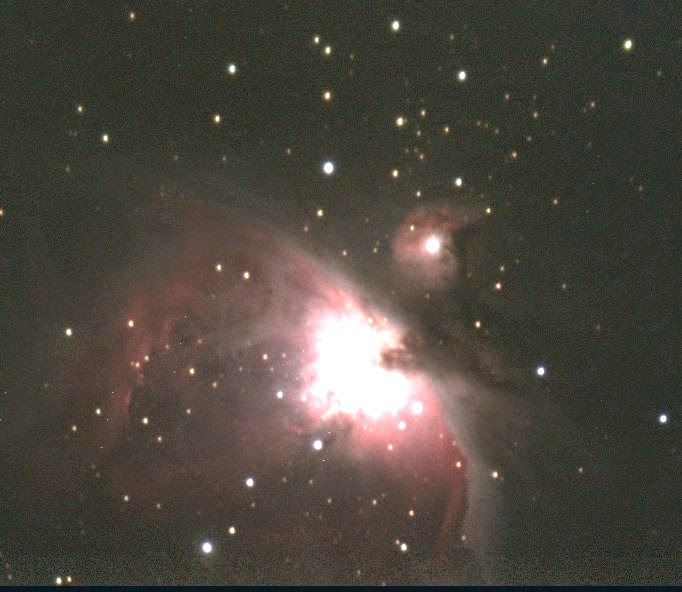 What you're looking at is a star-forming region about 1350 light years away, so the photons that crossed space, went through the optics of my telescope, and finally interacted with the detectors in the camera, producing a stream of electrons which were finally converted into digital signals on my laptop, left on their journey around 665 AD... which according to Wikipedia was around the time Wilfrid, the Anglo-Saxon abbot, refused to be consecrated in Northumbria as bishop.


Makes you think, doesn't it?