Back. Jetlagged. Had a great time. Three pictures. 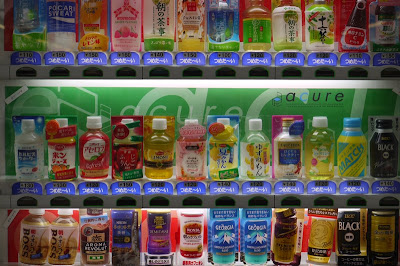 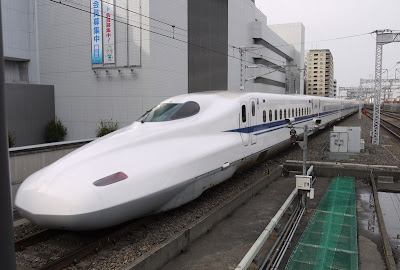 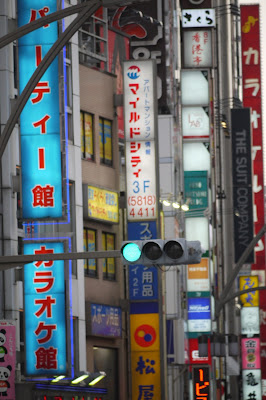 I promised updates during my Japan first so here's the first. Unfortunately there won't be any pictures as I don't presently have a means of downloading the images from my camera. You'll just have to take my word for it that they were some of the finest examples of the photographic art ever committed to an SD card.

My experience so far has been extremely favorable. I arrived early Thursday morning, to clear blue skies and an abundance of cherry blossom trees visible even before I'd left the aeroplane. I'd agreed to be met in the airport a couple of hours later, which allowed time for a shower (I could do an entire blog post about how excellent the shower facilities were, compared to the joke that is Heathrow) and some basic necessities such as arranging cellphone rental. Japan is 3G, so many foreign phones don't work here - however the rental process could not have been easier and the phone came with a handy set of basic operating instructions. I was up and texting within minutes of receiving the phone.

I was met at the airport by Tomoki Kodama, one of the Japanese fans involved in the organisation of the convention. Kodama-san and I then rode the impressively fast and modern Skyliner train into the Ueno district of Tokyo, where we met Andrew Adams, an ex-pat Brit with a long involvement in science fiction and who has been my point of contact in the long run up to Hal-Con. Within a few minutes of meeting we were sitting in the upstairs section of a fantastic Japanese restaurant, and not long after that we were eating. I had to pinch myself - I'm in Japan. Foreign trips like this are often so much more enjoyable when you can tap into a bit of local knowledge, and this was definitely the case here. The food was great. I've eaten enough Japanese food prior to my arrival to feel that it was to my taste, but one never knows quite how well that will map onto the true experience of eating locally. However, so far I've found the food to be excellent and very much to my liking. After an enjoyable stroll through Ueno's park and museum, Andrew very kindly invited me back to his place for an evening meal. Andrew and his wife were extremely hospitable and served me a very nice selection of sashimi dishes. Then I met up with Kodama-san again and we took a series of local trains to the hotel in Yokohama. I'll readily confess that, while having heard of Yokohama before, until the preparations for this trip I didn't know that it was so close to Tokyo. We were travelling at night, but I never sensed any great transition from one urban area to another.

I like Yokohama very much; people here (indeed, everywhere since my arrival) have been unfailingly friendly and helpful. And I've had a great day at the convention, in a characterful old brick building that I think many British conventions would kill for. I'll say a bit more about the convention in my next update, though.
Posted by Al R at 06:12 6 comments:

"Sometimes I can hear the jets, laced into holding patterns over Narita."


So I'm off to Japan, where I'll be attending Hal-Con. I'll be in Japan for six days - five nights in Yokohama, where the convention is located, followed by one in Tokyo, which will place me near the airport for an early departure. Sitting here today, it's rather difficult to believe that, almost exactly a week from now, I'll be back in London, and then shortly after that on my way home to Wales. It all seems a little dreamlike. Other than an extremely short visit to Australia for a telescope run, I don't think I've ever flown more than 10 hours in a plane and not stayed for at least two or three weeks. It's a short trip, however, because I've a lot of work on at the moment, with two novels to finish and a busy period of commitments, literary and otherwise, running right through to June. I don't expect to have fully recovered from my jetlag before returning from Japan.

I'm tremendously excited, but also (I don't admitting) a little apprehensive. I consider myself reasonably well-travelled, including a fair few parts of Asia. I've spent time in Malaysia, Thailand, the Phillipines, Singapore, Hong Kong, and I can even legitimately claim to have visited China, albeit as part of a brief tourist excursion over the border from what was then British-governed HK. But Japan promises to be something else again. Every website or guidebook I've looked at leads to me to expect that I can expect a kind of sensory and cultural overload as soon as I get out of the airport. On one level, of course, that's massively exciting - like a chance to step into the future for a few days. But I don't doubt that I'll also find it dizzying and disorientating. I'll also be grappling with total immersion in a foreign culture, which is not something that can really be said of Hong Kong or Singapore. But, again, there would be no point going if I wasn't ready to experience that. As it happens, I've been fascinated by Japan for years - it's somewhere I've always wanted to visit - and I'll be a little disappointed if my perceptions aren't knocked askew just a bit. I fully expect they will be.

I'll aim to blog and tweet during my trip, in so far as it's practical, so watch out for updates.

ps - and - in passing - thanks again to my extremely generous sponsors for the Sport Relief run, many of whom put in money after I'd completed the run. Thank you all for your donations.
Posted by Al R at 03:22 5 comments: 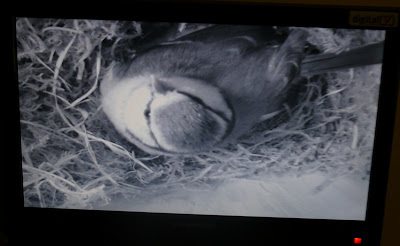