I remember (or think I remember) reading a description of Colson Whitehead's first novel over on Rick Kleffel's The Agony Column. At the time, as is so often the case, I thought "wow, that sounds right up my street ..." and then promptly forgot all about it. The Intuitionist appeared in 1999, so I'm guessing I heard about the book around ten years ago, give or take. I should pay more attention: it was on Rick's site, for instance, that I first saw mention of David Mitchell's first novel. 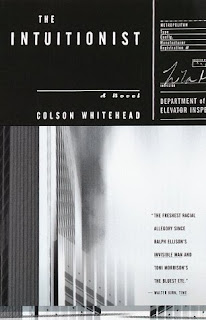 In the intervening years, as it is wont to do, my ailing brain began to insert Caleb Carr's The Alienist in the mental slot that should have been reserved for Colson Whitehead's The Intuitionist - clearly not comparable books at all, other than in their vaguely similar titles and the "C" in the author's forename. But at some point in the last few months I chanced upon a reference to The Intuitonist, alluding to its theme, and I immediately remembered that this was a book I very much wanted to read. Although I still couldn't remember the name of the author, I broke my usual conditioning to ask a question in a bookstore. It turned out they had a copy of The Intuitonist. I bought it, and I'm glad I did. It's a marvellous novel.

The premise is genius, the kind of gobsmackingly brilliant idea you could spend a lifetime searching for and not get anywhere close. In a nameless American city, seemingly around the middle of the twentieth century, elevators have become so central to modern life, so vital to its smooth and efficient functioning, that elevator inspectors have taken on something of the authority and stature of police officers, complete with uniforms, cars, internal affairs divisions, and ruthless factional warfare. There are two competing schools of elevator inspectors: the Empiricists, who make all their checks by the book, using tools and rigidly defined methods, and the Intuitionists, who basically just feel their way into a diagnosis of an elevator's safe functioning, in an approach akin to meditation. When the book opens, the heroine - Lila Mae Watson - is an Intuitionist with an unblemished record. But Lila Mae isn't just the youngest female inspector in the department. She's also black - "coloured" - and as an Intuitionist she's about to be set up for a fall, when an elevator she's just signed off as being in perfect working order undergoes an inexplicable malfunction. In order to clear her name, Lila Mae has to dig back into the history of elevator inspection - and the Intuitionist school.

On the surface, The Intuitionist is a stunningly rendered slice of noir-drenched alternate history - think Terry Gilliam's Brazil, or the Coen brother's The Hudsucker Proxy, and you'll have some idea of the grey, midcentury sheen so effectively conveyed here. It's all rain, skyscrapers, hats and radios. But it's much more than this. The Intuitionist is also a clever examination of race and the prospects for "elevation", or lack thereof, faced by someone of Lila Mae's status in the real twentieth century. It's also slyly funny, and the writing is never less than magnificent. In terms of its evocation of the textures and perspectives of urban life, the only thing it came close to reminding me of was China Mieville's The City and the City, another novel where the detective structure is both the point and not the point.

I liked The Intuitonist enough to rush off and order some more Colson Whitehead, and I'm intrigued by the news that Zone One, his next book, is basically a post-apocalyptic zombie novel. It'll be interesting to see whether it picks up much discussion within genre spheres, because one senses that The Intuitonist, were it to be published now, would make a considerable splash in the SF&F world.
Posted by Al R at 06:35