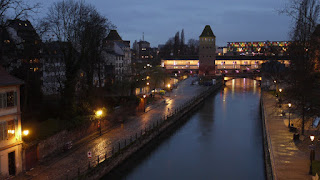 I was in Strasbourg the week before last, delivering a lecture to the International Space University. Opportunities such as this, which offer the chance to meet with friends old and new, as well as visiting previously unfamiliar parts of the world, are one of the great blessings of being a professional writer. I also have the benefit of having had what is considered to be an interesting career trajectory, having gone from full-time scientist to full-time author. Time and again, opportunities have come my way that would perhaps be rarer were I not to have had this supposedly unusual dual citizenship in the worlds of the arts and sciences. I am extremely grateful.

I had not visited Strasbourg before, so my wife and I made a short stay of it after I had delivered my lecture. Strasbourg was enchanting, a beautiful, compact city with wonderful winding streets and canals, its architecture betraying a long and turbulent history complicated by Strasbourg's close proximity to the German border. Indeed, Strasbourg has been both German and French in its time, as the border shifted one way or the other.

Inevitably, it was impossible to visit the official seat of the European Parliament and not be reminded sharply of the imminent reality of Brexit, now seemingly likely to be driven through in the hardest of all possible terms. I wrote about Brexit before the referendum, articulating - to the best of my abilities - my reasons for thinking that Britain would be better off remaining within the EU. My position was admittedly based as much on emotion as logic, but I see no need to apologise for that. Emotions have been running high for as long as the referendum has been on the table, on all sides of the debate. Why not? It's an emotive topic, cutting across real lives and real experiences. I lived and worked in the EU, I benefited strongly from the free movement of workers across its borders; I even claimed unemployment benefit from the Dutch government when I was without work. I see myself as European in outlook and temperament. My wife is an EU national. We now live in the UK, and for at least half a decade considered our future settled. We were content to make our future in a country we both regarded as open, tolerant and forward-looking. All of that has changed since June.

And yet, with a certain fatalism, I now accept the reality of Brexit. Barring some terrorist or military incident completely shifting the political landscape, there seems no way that it is not going to happen. Reasonable voices have been raised against it, and their positions summarily dismissed in the most insulting of terms - enemies of the people, remoaners, and so on.

But acceptance need not mean an abdication of feeling. I "accept" Brexit in the same spirit that, if you are strapped to a table and someone is sawing your leg off, you "accept" that it will continue. Indeed, once started, the process - however damaging - had better be seen through to its dispiriting conclusion. I am convinced now that our leaders have already poisoned the discourse so thoroughly that it would be difficult for the UK to settle back into its former position within Europe, even if Brexit were immediately abandoned.

It won't be, though. Like Basil Fawlty, bashing his head against the desk, it seems this is the reality we're stuck with.