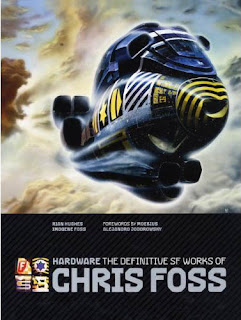 Over at http://www.unlikelyworlds.blogspot.co.uk/ Paul McAuley has been posting some classic 70s paperback SF images, many of which are by the incomparable Chris Foss. These days, it's perhaps hard to grasp the extent to which the spaceship-orientated visual style of Chris Foss was absolutely inseparable from SF, to the extent that many of the other artists of the period were obliged to emulate the Foss look. I adored Foss's work even as I came to the sobering conclusion that most of the images had nothing whatsoever to do with the contents of the book.

This seemed as good a time as anyway to reprint my review of Hardware, which originally appeared in the BSFA's Vector magazine:

These words were delivered by a geography teacher, examining a paperback of Asimov short stories that I'd foolishly allowed to remain visible on my desk. The focus of his scorn was not the contents of the book, of which he remained ignorant, but the cover, a painting of some daunting megastructure rising above an alien moon. Actually, I'd have readily agreed with him that not only would the depicted situation "never happen", but there was a vanishingly small chance of it having much to do with the stories in the book. This, after all, was a Chris Foss cover. Foss covers seldom related to anything.

It didn't matter. I loved Foss and I still do. The colour, the drama, the vast sense of scale and possibility - his pictures have always delighted me. Liberated from the texts themselves, as they are in this massive restrospective edition, it matters even less. Foss has been prolific, so clearly nothing less than a big book will suffice. I haven't counted, but with more than 230 pages, a good number of which are divided into three or four panels, Hardware must contain well over 500 illustrations, all - to my eye - well reproduced on good quality paper. Given the proviso that it's almost all machinery and landscapes, the range is impressive. There are, for instance, fifteen paintings just of submarines. There's a two-page spread devoted solely to paintings of things being grabbed by giant robot claws coming out of the sea. Hundreds and hundreds of spaceships, space stations, bases, asteroids, towering robots, explosions. People crop up here and there, but they're not the reason we come to Foss. His most iconic images are largely devoid of the human element. Personal favorites: the marvellous double-spread picture for "A Torrent of Faces" - Ballardian entropy made manifest, even though it isn't a Ballard book, and the gorgeous single image that was split into three for the Foundation trilogy.

It's such a generous assortment that it seems churlish to quibble. I'd have appreciated an index by book title, and I'd be slightly wary of the date attributions: my edition of Harry Harrison's In Our Hands The Stars, for instance, with its gorgeous cover of a chequerboard spacecraft rising from a night-lit cityscape, dates from 1981, not the 1986 stated here. There's also little about Foss the man: other than a single small photograph from 1977, there's no image of him (and even in the photo, it's not obvious which one is Foss). I'd have appreciated a sense of the artist in his natural habitat. We're assured that Foss is still active, but there's little evidence of that from the images, few of which date from later than the early 90s. Clearly, SF paperback illustration is a very different game than it was in the "golden age" of the seventies, but Foss's work still looks pretty timeless to me. It would be good to see new work, but in the meantime this lavish book is a fitting retrospective.