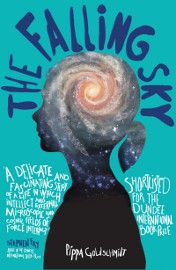 Belatedly, my review of Pippa Goldschmidt's excellent novel The Falling Sky appeared on Arcfinity a few weeks ago:

"Pippa Goldschmidt’s The Falling Sky is that rare thing: a literary novel that gets under the hood of science as a social enterprise, done by real and fallible people. It’s an extremely accomplished debut and the best evocation of the actual life of an astronomer I’ve ever read."

You can read the full review here. It's a fantastic book which deserves some attention. As a literary novel about the process of science rather than a piece of genre science fiction, I doubt that it will receive recognition from any of the field's usual awards - although if the Clarke can extend its remit to include genre fantasy, I see no reason why this book could not be shown the same generosity of spirit. Novels about science are rare enough things. In any case it would be encouraging to see it on some mainstream shortlists. Stephen Fry liked it.
Posted by Al R at 04:51