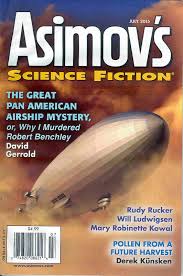 As the leaves begin to drop and the warm summer nights finally give way to the chill of autumn, it's time to review ... oh, wait, it's December already, and I'm still on the July issue. Never mind, I never promised you a rose garden, so let's crack on.

Mary Robinette Kowal delivers the lead novelette, "Like Native Things" and it's a nastily clever take on the idea of humans being able to jack into the nervous systems of other animals. Tilda, the scientist protagonist, is duped by bad-guy Helmut into gaining access to the experimental wetware control system of a dolphin, so that he can commit a terrorist act. The plot is simple: Tilda realises what's happened, and then has to scramble to use whatever wetware-controlled animals she can (octopus, puma and so on) to get to Hector before he achieves his aim. It's basically just an extended chase scene, conventionally - and breathlessly - told, with Tilda hopping from one animal body to another, but I hadn't seen anything quite like it before. It does all get a bit Scooby-Doo with the bad guys talking to each other in a way that very helpfully explains their plans (while Tilda overhears), but it's still fun, doesn't outstay its welcome, and I liked the ending.

David Gerrold has been part of the field for as long as I've been alive, but having read very little of his work I was interested to see how I got on with the next novelette, which is "The Great Pan American Airship Mystery, or Why Murdered Robert Benchley." My first thought, before going into the story, was what does Gerrold have against the guy who wrote Jaws? Being thick, I didn't know anything about the "real" Robert Benchley, nor very much about the Algonquin Round Table, and to a large degree - given the centrality of the Algonquins to this alternate history confection - I can't really judge how well Gerrold hits the voices and mannerisms he's aiming for. That said, on its own terms, it's perfectly enjoyable, and along the way gets into some mildly clever metafictional games. Beyond that, I can't really say all that much, other than that if there were false notes, I was too tin-eared to pick them up.

"Acres of Perhaps" by Will Ludwigsen is a likable piece that riffs off events surrounding an imaginary TV series in the vein of The Twilight Zone or The Outer Limits. On my first read, I couldn't get on with at all, but something clicked and I found it much more to my taste when I gave it a second go. With that in mind, it's worth adding that I'm perfectly aware that one or even two reads won't always be sufficient to pull the good stuff out of a story, so if I've dismissed a piece or two during these reviews, I'm more than willing to accept that it may just have been me. Anyway, "Acres of Perhaps" focuses on the strange background of David Findley, the resident genius on the writing team, the one who had the real creative spark, as opposed to the reliable plodder of the narrator, who can pull stories out of his hat on demand, but never quite hits the weird heights of Findley's material. What's nice about this story is that, instead of just telling us that Findley wrote weird, imaginative episodes of the show, we actually get given specific examples of what they were like. Things take a decidedly Twilight Zone-esque twist when Findley's strange, Hill-billy-type family show up on set and demand to take him home, where he'll be much happier. I liked it.

"Petroglyph Man" by Rudy Rucker is another in a long line of stoned, gonzo surfer-dude Rucker pieces, this time about a new tech app called Benthos that somehow peels back reality to show what we're really thinking or feeling. If you take a photo using Benthos with your smartphone, the app distorts the eventual picture to reflect a sitation's "vibes" rather than the literal truth. Yeah. You'd better read the story, because it starts weird and then gets weirder, especially when the titular Petroglyph Man shows up. But if you like Rucker - as I do - then that's no hardship, and the story does actually have a good old romantic resolution.

By far the longest piece in the issue, Derek Kunsken's "Pollen from a Future Harvest", is a dense, knotty, twisty story about political machinations on a distant planet where human scientists and military types (with a strong African background) are engaged in the study of a very alien indigenous lifeform, the so-called "vegetable intelligences". Kunsken's story centres around the existence of a natural time-gate, which allows certain forms of information to slip back by eleven years - a feature which the vegetable intelligences have incorporated into their genetic biology at a very intricate level, using gene-coded pollen which blows back through the gate and allows their past and future selves to experience a kind of continuous but ever mutating present, spanning twenty two years between its leading and trailing edges.  Naturally the human investigators are very interested in using this capability to further their own political ends. Although told in quite traditional terms, it's stylish and exceedingly convincing in its imagined details, with exactly the right kind of off-hand jargon and theorizing to make the time-gate concept seem entirely plausible. I also liked the oppressive, paranoid atmosphere of the foreground narrative, with Major Okonkwo detailed to "audit" the sudden loss of pollen transmissions from the future, leading to an edgy, nervous investigation with echoes of cold-war spy thrillers. It reminded me, in the best way, of both the anthropological SF of Ian Watson and the early, icy hard SF of Gregory Benford. According to the introduction it's the second entry in a series exploring the biology of the vegetable intelligences, but while the ins-and-outs of the political gamesmanship occasionally lost me, I didn't feel that I necessarily needed to have read the earlier installment. I enjoyed Kunsken's early story in Asimov's this year, but this is even better.