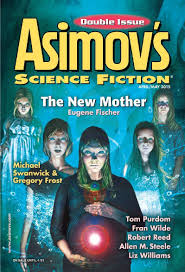 As I alluded to in my review of the June issue, I had to set this one aside for the time being due to losing my physical copy of the magazine. I'd been reading it during a trip to Geekopolis, the big multimedia comvention in Paris, and to the best of my recollection I must have set it down on a table during an interview and then left it there. Sheila Williams, the editor of Asimov's, very kindly sent me a pdf of the edition but that brought its own complications. I could only read it on a laptop, and that meant the occasions when I normally read Asimov's - bedtime, bus rides, train rides etc - were out of the question. It took me longer to get through than normal, not helped by the double issue containing much more fiction than the usual editions.

I also found - to my regret - that quite a bit of the fiction in this issue just wasn't to my taste on any level, but there were still a handful of stories I could get behind. I also decided to make a pragmatic call - if a particular story was turning into a serious struggle, I gave it two or three goes before abandoning it.

Unfortunately - for me, anyway - the lead story in this issue, "The New Mother" by Eugene Fischer, was one of those pieces I couldn't finish. I did try. It's an extremely lengthy account of the emergence of a strange new sexually transmitted pandemic that gives rise to diploid eggs, allowing for "virgin" births. It's competently told - there's nothing clumsy about it on a line by line or even page by page level - but the net result is, to my eyes, dull, diagrammatic storytelling, propped up by lengthy infodumps in the form of article excerpts. If you've ever wondered how the American medical system would respond to the kind of pandemic outlined in the story, it's probably accurate enough in its imagined details, but despite two goes I couldn't get more than a few dozen pages into it. I wasn't engaged by the journalist protagonist, her situation, her travels, the dull-but-credible dialogue. The stuff I want from short science fiction - colour, pace, weirdness, estrangement, invention, language, mood ... it's all absent here. Sorry.

Onto "Day Job" by the respected veteran author Tom Purdom, whose work I've enjoyed in the past ... but not here, I'm afraid. Following on the heels of "The New Mother", it's another story which has a kind of plausible-but-dull "TV Movie of the week" feel to it. It's all very grey and uninvolving, with a pointlessly large cast of characters and viewpoints, but no real sense of place or texture. It's just dialogue, action, dialogue, action, all the way through. It's about some kind of psychological retraining scheme allowing borderline sociopaths to function in the normal workplace ... I think. But again I gave it two goes before my eyes glazed over.

It's a blessed relief to turn to the Swanwick/Frost collaboration. Michael Swanwick (along with Allen Steele, who also has a story in this issue) provided a kind endorsement for my story "Slow Bullets", so feel to free to disregard my opinion, but "Lock up your Chickens..." is what I want from short science fiction, in that it's weird, colourful, different, does significant things with voice - while being incidentally laugh-out-loud funny - but it's also the kind of story that immediately offers reassurance that you're in the hands of writers who know what they're doing, who know how to sustain narrative interest, handle pace and so on. It's a kind of depression-era tale of itinerant con-men, H'ard and Andy, and I enjoyed it entirely on its own merits, completely oblivious to the fact that the characters are an affectionate take on the personalities of the real writers Howard Waldrop and Andy Duncan, something I only learned when I shared a panel with Michael Swanwick at a recent convention. It's not groundbreaking stuff, it's not going to storm the awards shortlists (I think) but it's fun and funny and technically assured.

Just when things are looking up, we come to "Paul and his Son" by Joe M. McDermott, which I'm afraid I couldn't get on with at all. I read it twice, too, from beginning to end. It's all over the place. Set a decade or two from now, I'd guess, it's about a father who's come up through the era of global over-medication, and now there's a kind of backlash, in that the next generation are having to make their way into the world without being medicated ... and the story hinges on the father's efforts to track down an illegal, imported drug which he thinks will make life easier for his son. The son, incidentally, is also called Paul - a pointless, confusing complication which serves no purpose at all, other than to have the reader constantly backtracking up a line or two to see which Paul is being referred to. The narrative voice is that of the older Paul, but it's tonally inconsistent, and unfortunately quite clumsily written, with too many commas, sub-clauses and rhetorical questions. The story proceeds to an underwhelming conclusion, and I'm sorry to say it's one of the weaker pieces of short fiction I've encountered in my recent reading.

My friend and one-time collaborator Liz Williams delivers a short but vivid vignette in "The Marriage of the Sea", which like much of Liz's fiction straddles the Vancean border between science fiction and fantasy, preferring to leave much unexplained. This piece deals with a sacrificial ritual that takes a wayward turn, and there's not really much more to be said other than the writing is sharp and descriptive, with Wiliam's usual control of language. I particularly liked "an air of ghastly festivity", but you'd need to read the piece to get the context.

I've long enjoyed Robert Reed's work, both at novel and shorter length. He's extraordinarly prolific, and if his stories don't always light a spark, they're always delivered with a certain panache, a certain minimum level of competence, and you can be sure that they'll embed at least one or two very clever insights. "What I Intend" probably isn't classic Reed but it's reliably interesting and insightful, offering a breathtaking new take on the age-old question of SETI, the search for extraterrestrial intelligence. Reed revisits the famous "Wow" signal, then spins off from that to speculate that there might be "Wow" signals going on all the time, if only we had the capacity to detect them, and then goes a step further to come up with a genuinely original, bracing and bleak idea of What It Might All Mean.

Anna Tambour's "The Gun Between The Veryush and The Cloud Mothers" starts off intriguingly enough, with a potentially evocative off-world setting involving a low-tech tribal society but with a lingering sense that there's some sort of science fictional premise lurking not too far away. But it soon shifts viewpoint (why?) and gets bogged down in interminably dull stuff involving priests and acolytes and lots of made-up names, and I'm afraid I found it impenetrably dull and earnest, and was not able to get very far into it. I don't demand that a story grab me on the first line, or even the first page, but something's got to give me a reason to keep turning the pages and simply getting to the bottom of someone else's worldbuilding, no matter how intricate or thought-through, isn't going to do it. I've said it before in earlier reviews, but I don't understand why so many writers seem intent on using multiple points of view in short fiction, even at novelette or novella length. What works in a novel works against the effectiveness of short fiction.

"Willing Flesh" by Jay O'Connell isn't anything exceptional, but at least there's only one point of view, and the tone is perfectly suited to the material. It's a clever premise: a fat dude signs up for a dodgy weight-loss program that involves much more than he bargained for. Like all these things, it starts well, then goes off the rails. There were some odd dialogue glitches in this pieced where I found it hard to determine who was speaking, but that's a small observation. The story doesn't have a knock-out ending but it's enjoyable enough because it's not trying to do nine zilllion things at once.

I enjoyed "How to Walk through Graveyards in the Post-Digital Age" by Fran Wilde rather a lot, without quite being sure I got to the bottom of it. There's some really smart, inventive stuff in this story, which blends the after-effects of post-war cybernetic surgery (involving some nasty but plausible speculation about memories being deleted or suppressed for military security reasons) with what might - just - be an actual, honest to god ghost story. I don't mind not getting everything on a first pass through a story, provided the writing gives me the assurance that there are additional levels, and in this case the piece has that necessary sheen of competence.

"The Sentry" by Frank Smith also deals with the after-effects of war, but in this case the premise struck me as much less plausible. It's the twenty fifth century, supposedly, and we're out in the solar system, where the moons of Saturn, such as Tethys, have been terraformed (good luck with that, I was thinking). It's a quiet piece, in its way, dealing with a veteran of the war and his reactions to a violent but innocent event in a domestic context - the family dog mauls a rabbit - but the telling, and the details, are such that the story could easily be transplanted to 2015 with very little effort, all the more so because we're told that, despite it being the twenty fifth century, people still watch baseball and use the commonplace American slang of the present day.

Allen M Steele's "The Children of Gal" is the long concluding piece in this issue, and it's very much in the tradition of classic SF stories such as Clarke's "Against the Fall of Night", in that we start with an insular, cut-off society that does not properly understood its origins or nature, and a protagonist breaks away from the immediate confines to get a better understanding of their place in the universe. Steele is too much of an old hand to put a foot wrong here, and from the outset we're given a reason to keep turning the pages. In its way, it starts off from a similar place to the Anna Tambour story, but Steele holds his focus on one character and gives us a reason to care about their immediate predicament. In this case, the boy's mother has been shamed and exiled after claiming - against the accepted rules of her island culture - to have seen a light moving through the sky. Of course we're intrigued, and when the mother returns from her exile - impossibly, it seems - we follow the protagonist as he comes to a richer apprehension of the nature of his world. Once the mother returns, there's surprisingly little jeopardy, and - as the protagonist meets the beings responsible for that moving light - things begin to creak a little under the weight of exposition. Oddly, I didn't much care. Perhaps it's because the story moves so smoothly, or simply that Steele's voice is so engaging, that it doesn't really matter that at least half the story simply consists of the protagonist being shown and told exciting stuff. This story, incidentally, is part a larger narrative that Steele is developing, but it reads satisfyingly enough on its own terms.

So there you are - the April/May double issue. I disliked rather more of the stories than I expected to, but on the upside, there's still some good, solid stuff here and I went on to be rather more appreciative of the June issue.