All stacked up in the rain 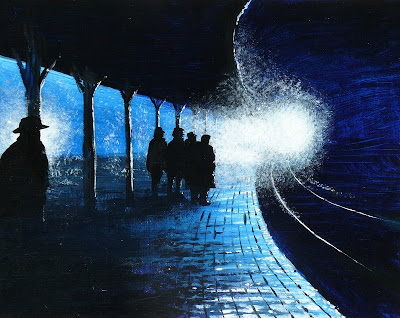 I don't mind spending days, weeks or even months on a piece of art, but sometimes it's good to cut loose and work quickly. When I was a student I went on a two week residential art course in South Wales, where we were encouraged to do just that. I remember one of the assignments involved being dropped in Pontypridd market and told to produce as many pen sketches as we could, aiming to capture people as they stopped to buy bananas and so on, almost a candid camera approach where the work would consist of a few pen strokes at best and then on to the next subject. I found it very liberating at the time but olde habits die hard and my natural tendency is to work meticulously and neatly.

Lately, though, I've been trying to draw and paint faster, to set myself a self-imposed time limit and see if I can produce a piece of art within that period. Sometimes this can be as brief as a couple of minutes, or perhaps half an hour for a slightly more involved drawing. Where the quick approach really comes into its own is with painting, though, since it really encourages you to drop your inhibitions and just start splurging paint around.

This picture was inspired by a black and white image in a collection of images of nighttime railroads - I've blogged about O. Winston Link before, although this image while in a similar vein was not one of his - and it was painted very, very quickly. The entire thing was completed during a two hour evening at the local art society, but allowing for a coffee break, and a certain amount of faffing around at the start, deciding what to do, then cleaning up at the end, the picture couldn't have taken more than 90 minutes to finish, and was probably closer to an hour. The key in this case was that nothing in the picture needed to be painted with any great precision, and I chose to use acrylics rather than the oils I've been using a lot recently. Oils are great for working fast as well, but in this case the high contrast between the lit and dark areas suggested that acrylics would be a better bet, since I'd be able to paint highlights onto already dry areas very soon after the initial application. I began with a blue background which had dried by the time I got back from coffee, then added black and white and intermediate tones over that.

The original, and I hope the painting, has a definite noir quality which I found intriguing. Who are those people further up the train platform? Who is the figure in the hat? Do they know each other? Is the man in the hat some kind of fugitive hoping to get on the arriving train and escape the other people? Going back to my O Winston Link post, the original photo made me think of the Blue Nile, of the cover of their album Hats and the imagery in many of their songs of late night trains and rain and melancholy encounters. I love the fact that a single photograph, a snapshot of a innocent moment (doubtless it was just another day at the station) can activate so many thoughts.