TEDx, Wales Book of the Year

I got back from Oslo (which was great; thanks are due to my excellent hosts - especially Heidi Lyshol - for a very enjoyable visit) and then had to immediately dive into preparations for the TEDx Cardiff event on the coming weekend. As a consequence I'm still not up to date with everything, but bear with me.

TEDx was hugely enjoyable, if stressful. I've talked in public on many, many occasions, both as a scientist and writer, and to audiences large and small. By and large it doesn't bother me, and such nerves as I get before speaking are generally more to do with the nagging background worry of technical problems, rather than the act of standing up and talking itself. As a scientist I used to fret about difficult questions from the audience - the standing joke among astronomers of my acquaintance was that almost any talk could be derailed by someone asking "what role do magnetic fields play in your model/observations?"

By and large, though, talking about science fiction is usually much less combative than defending your latest pet model or cherished data set in stellar physics. But TEDx was different. To be honest, TED hadn't been on my radar before I was invited (which shows you how not very plugged in I am, really). But once I'd agreed to speak at the Cardiff event (TEDx is a series of independently run sessions in the spirit of TED itself) I started encountering it all over the place. There it was in the Guardian. There was Ted Danson talking about it on CNN. My guitar tutor was more clued-up about than I was. And what was clear was that the expected standard of a TEDx talk is very high indeed.

Here, for instance, is Janna Levin talking about the soundtrack of the cosmos. Now I don't know about you, but that's just a tad more polished than the average mildly shambolic presentation at your typical science or literary event. TED talks are also supposed to be brief - there's a strict time limit - and very much to the point. No faffing around, no meandering digression. I generally speak for 30 - 45 minutes, which is more than enough time to pull things back on course if they start to drift. No such luxury with TED. You've got to nail it, and you've got to plan it almost to the second. Once I'd honed in on my subject, I spent two days cutting and cutting until I felt it was easily short enough to fit into my allotted 18 minutes. And yet, I still kept running over-length. I cut and cut again, and when I had it down to 16 minutes I ran it past my wife. I then cut it a bit more and after two further rehearsals I managed to deliver my piece in 15 minutes 30 seconds, both deliveries running within a few seconds of each other. I also learned it off by heart - I didn't want to be referring to notes, or cluttering my slides with bullet points.

Despite all that, I still went a little over-length on the day itself. I'm guessing the mere act of standing up in a big room, and being able to walk around, slowed me down a little more. But, I think it was OK - the reaction seemed good, and it was clear that people had found all the day's talks really stimulating. For me, it was a blast, albeit a nerve-racking one. I was on at the end so I couldn't really relax until I'd done my stint. But that didn't stop me enjoying the other presentations, all of which gave me something to think about afterward. I'd like to thank Claire and Neil for having me, and after all that I'm pleased to have TEDx very firmly on my radar for the future.

Here's me with Tori James, the first Welsh woman to climb Everest. Given my avid interest in armchair mountaineering, meeting Tori was a real thrill. 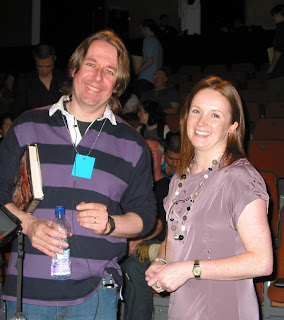 In other news, today is the announcement for the long list of the Wales Book of the Year, and I'm delighted to report that Terminal World has made the cut. Yes, this is a high profile literary award, with a substantial prize and "proper" books on it, and there's also a big, chunky, unabashed science fiction novel in the running. Speaking for myself, I'm mortally sick of the endless in-genre hand-wringing about the perception of SF beyond the so-called ghetto. Granted, the Booker may still be hostile or indifferent to science fiction, but isn't there abundant evidence elsewhere that many, many people just don't really care any more? Last year I was invited to speak on the subject of the recycling of mythology at an English Lit conference, and guess what? I didn't detect one note of disdain from anyone I met, only a general open-mindedness and curiosity.

Anyway, I'm thrilled with the long-listing.
Posted by Al R at 03:06